Roadrunner leaves its prints on the sand.

This is a desert so out of the ordinary a hunk of it was designated the Queer Mountain Wilderness Study Area by the U.S. government in 1992—the same year I was born.

This is a queer land.

I identify with land that has been othered.

Here in Mojave National Preserve, we are in the thickest thicket of joshua trees in the world.

Here in Mojave National Preserve, we are in a very different type of forest. 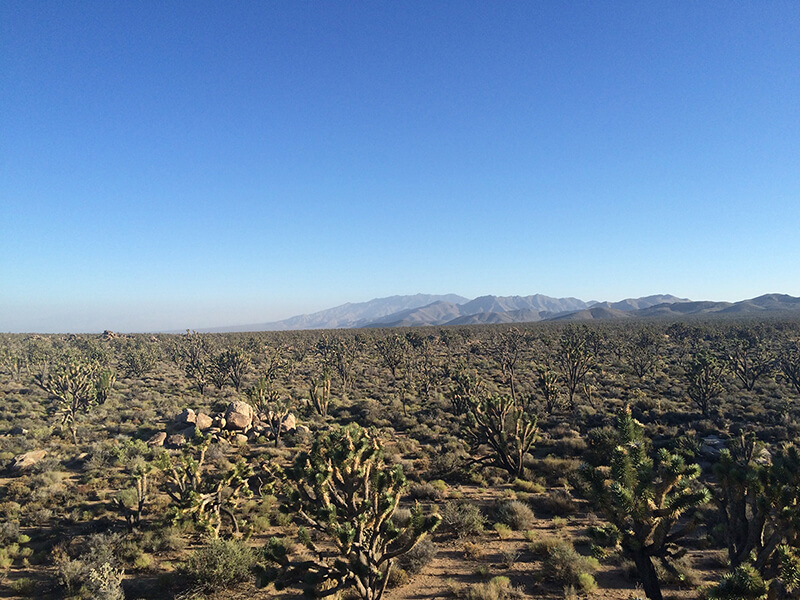 My friend Anna is among their many whimsical arms lifting up her own to the late afternoon sun in an appreciative salutation. Her hair is up and brushes the sweat on the back of her neck.

This grove of trees lie in the crotch between the rotund 70-acre Cima Dome and lofty Kessler Peak.

Cima Dome is so massive, that if you were plopped on to its summit, you wouldn’t even know you were on the top of a mountain.

It would just look flat.

It is the result of a work-shy volcano.

We had pulled off I-15, the highway that darts through the Mojave Desert and passes right by the sparkler of Las Vegas.

We set up camp. We are on a road trip that will eventually dribble us into Los Angeles.

I wonder what kind of things the ground bird chases.

There are prickly pear by our ankles, some of them are generous and offer us their blooms. 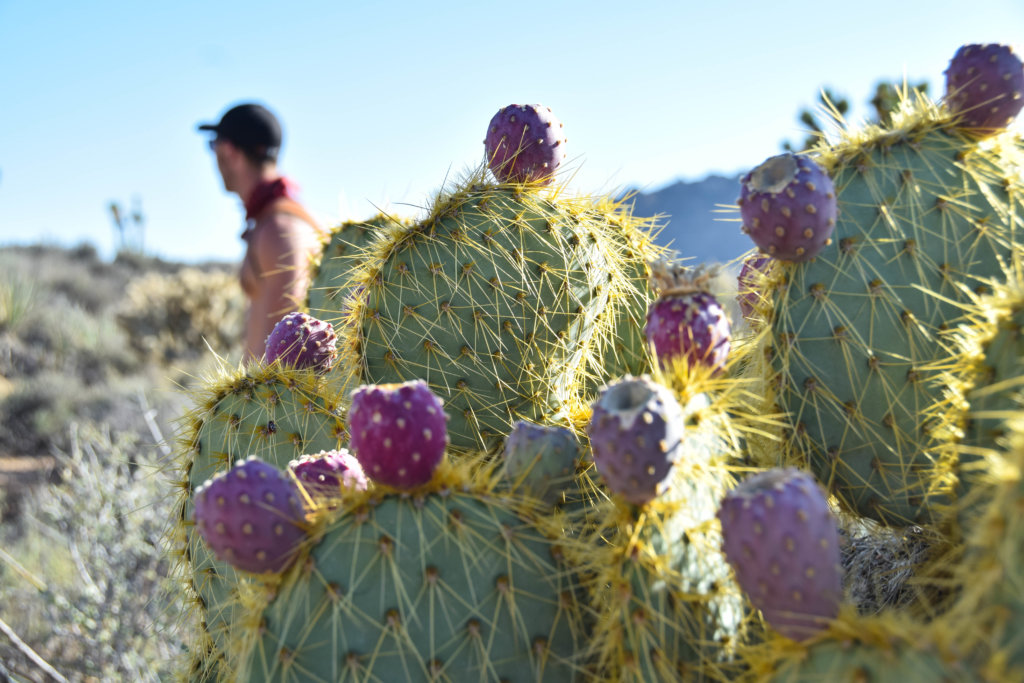 A few ladybugs explore the cup of the blossom in hope of aphids.

Most don’t know that the combined weight of all the insects in the world is many many many many times more than the mass of humanity.

We could be squashed by their weight, like an anvil falling off of a butte onto Wile E. Coyote as the Road Runner meeps by.

Right now, in the goldening hours of the day, the desert is giving us curtains of color. I’m not sure what the curtains are made of.

The curtains help break apart the space that seems too big for comprehension.

The colors we are seeing are gold like the ore once dynamited, ransacked and left as abandoned mines across the preserve, purple like the underbelly of pillowing storm clouds, and billows of pleasant powder blue.

Anna tells me magical realism doesn’t solely exist within the pages of an Isabel Allende or Gabriel García Márquez novel.

She writes award winning stories about girls that are actually manatees that get hit by boats.

I always remember that image.

We’ve all had a lover with a heart like a cuckoo clock.

It exists elsewhere and everywhere.

She has taught me to see the world more fantastically.

It has made me see some mountains as handsome. It has helped me make a blue spruce a boyfriend.

It has helped me feel the arousal of the river’s caress and the sensuality of the breeze when I was alone and ran across the sand dunes of the preserve without my shorts.

It has made me see two hills like the breasts of a woman or, depending on their distance and globularity, like the buttocks of a man.

It has helped me understand what Georgia O’Keefe was really painting when she painted flowers.

Before, I was none the wiser.

But now I know what O’Keefe was really up to when she painted mountains whose spurs spread like legs with wild juniper bushes in their crotches.

All of this has helped me anthropomorphize the land.

If we all saw the land as a person worth loving, we might not have bombed the Southwest with nukes in the 1950s and departed so many downwinders.

If we all saw the land as a person worth loving, we might not have a current administration so giddy to continue the poisoning of land. Trump and Zinke have already gifted 1.3 million acres of the Mojave to miners ready to abuse the desert.

If we all saw the land as a person worth loving,  we would have never had any of these damn pipelines or oceans with plastic islands the size of Texas.

We like this, but the containers are still plastic.

Literary critic Matthew Strecher once defined “magical realism” as “what happens when a highly detailed, realistic setting is invaded by something too strange to believe.” 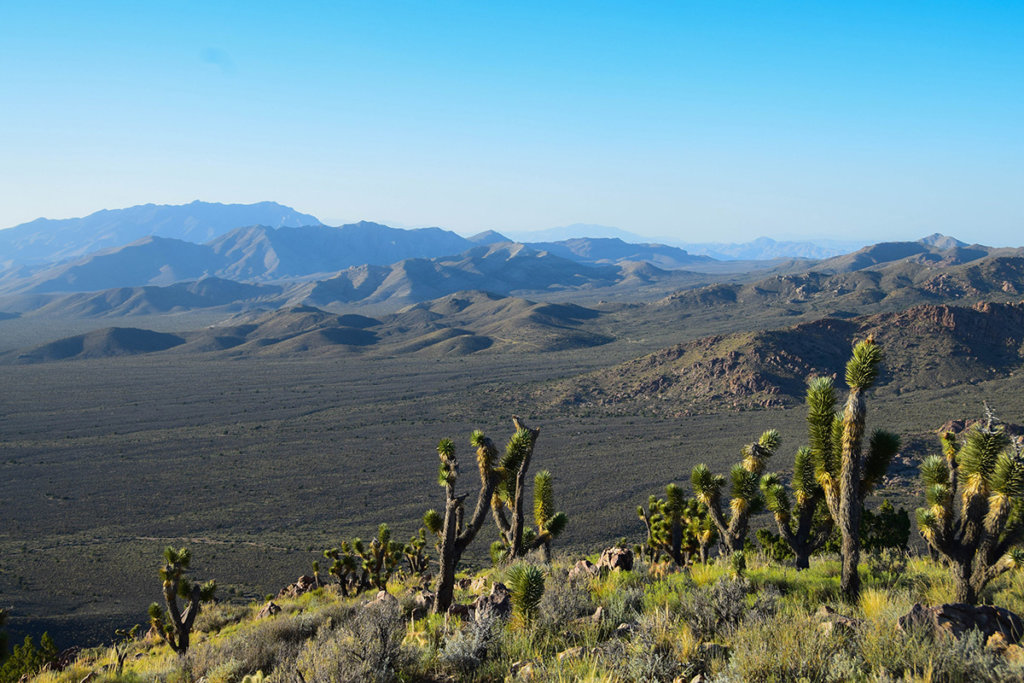 For some stories, it’s the appearance of an ancestor returning to guide a main character on their journey, perhaps a grandmother returning with wisdom on how to fight fascism and greed. For others, it’s the emergence of a talking animal—like the enormous and godly golden carp of Rudolfo Antoya’s Bless Me, Ultima.

Many other things can happen in the realm of magical realism.

You see, I’ve always believed in the magic of our surroundings, but I had never seen anything truly out of the ordinary.

Yes, polychromatic sunsets and rises, galloping horses on black sand beaches, platypuses darting through the waters of a billabong— but it wasn’t until Anna and I found ourselves on the summit of Kessler Peak, in the middle of the Mojave that I was persuaded.

The Mojave National Preserve is the third biggest wilderness area in the lower 48.  It’s not easy to imagine 1,600,000 acres.

But that doesn’t mean they should make it smaller.

The preserve was designated by Congress in 1996 under the California Desert Protection Act. And under the Obama administration, new land was protected around it—Mojave Trails National Monument with the dazzling Cadiz Dunes and the stately pinnacles of Castle Mountains National Monument.

These preserves have official borders but the land doesn’t recognize them and nor should it.

They blend together as one like watercolors on the page.

The California Desert Protection Act was the grandchild of a woman named Minerva Hoyt who loved the desert so much, she made herself a part of its bloodline.

You would need a million lives to see everything in the preserve and all of these monuments.

You have to camp in the middle of it and take off your clothes and yell a big yippe-ki-yay just to understand the importance of immensity and the possiblitity of space.

The danger of exposure.

There is freedom in space.

In the preserve, there are sand dunes called Kelso that at night, act as a ladder to the moon.

Did I mention that these dunes sing?

The dryer they are, the sweeter their chorus.

There are cliffs with holes like Swiss cheese that birds nest in.

There is a cross that is a memorial to WWI soldiers that was the feature of a Supreme Court Decision that was later stolen and then found 500 miles away in Half Moon Bay, California.

There is physical abandonment in the form of mine shafts and ghost towns with rich tales of death.

There are lava beds and canyons and cougars and even bighorn sheep.

There is a beach without an ocean called the Devil’s Playground that stretches into salt flats of ancient lakes. 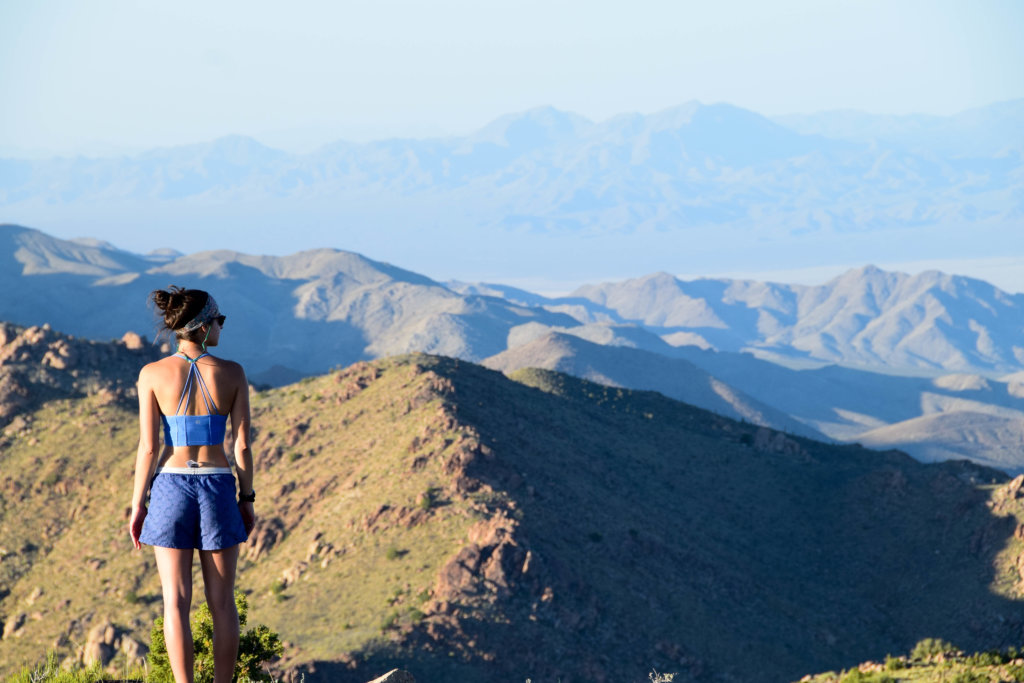 As Anna and I climb higher to 6,000 feet on Kessler we can begin to believe all of this. We know that there is not enough time to see it all but that we are many people in this world and maybe we can see it all together and hear about the places we’ll never make it to.

We can begin to imagine all the bugs and insects that are out there as soon as the dusk birds and bats start fattening their bellies.

When we finally reach the top of Kessler, we look for the summit log. We are curious who was before us and where we fit on this mountain’s narrative.

Shadows are casting themselves elegantly and are dressing other mountains and valleys with a sultry black velvet robe that is quite sexy if you ask me.

We continue our search for the summit log among rocks and yuccas in all of that sexiness.

We are writers and are enthusiastic to put our black ink onto  parchment weathered by the Mojave. 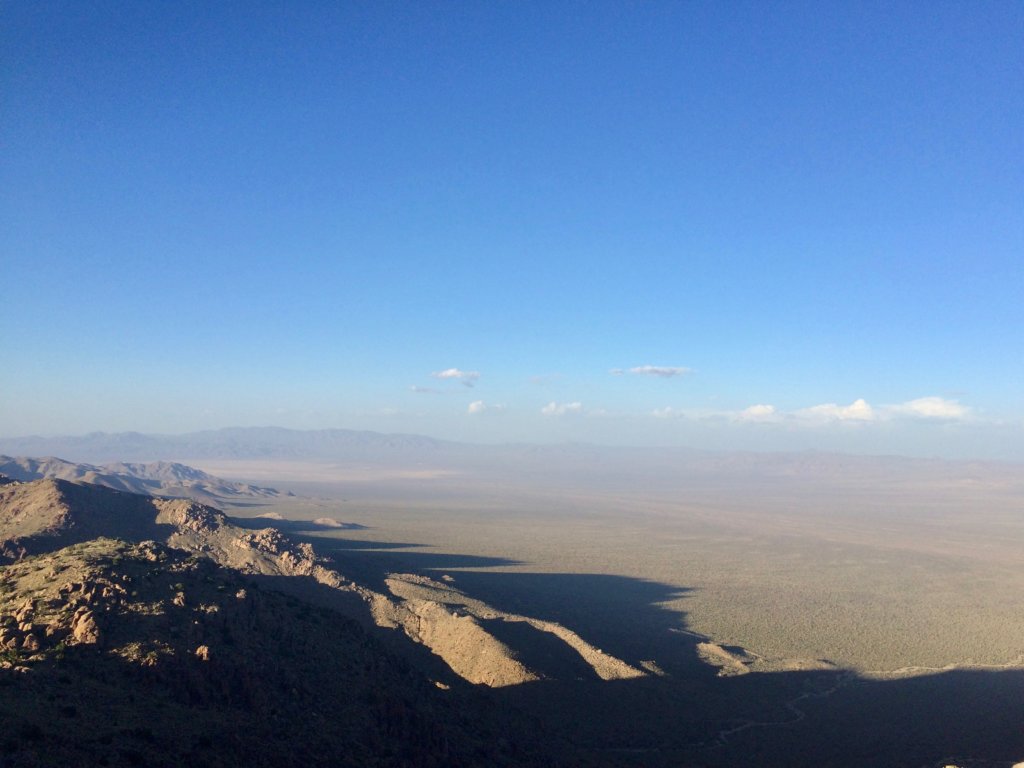 We need to tell the next readers who we are and what we saw and log our admiration.

There is a rusty can underneath a rock and the breeze is blowing hard at the top but it isn’t cold, it is like the breath of a dragon.

When we grab the can and open it, the small notebook falls out and so do hundreds of lady bugs.

Some are red and spotted. Others are missing their sports—perhaps they were blown off by the wind, perhaps they had been rubbed off onto other ladybugs.

Some are almost pink and others are the colors tomatoes turn after being in the sun too long. Some are so washed out they are yellow. Whatever their color or spot count they keep spilling from the ground below the can and I am persuaded by the weight of insects.

We are paralyzed by awe and only able to capture the moment by story.

The mountain erupts ladybugs into the sky and they rush to explore the preserve as if it were going somewhere.