Philly often gets a bad rep. And being in such close proximity to cities like NYC and D.C. doesn’t help with that either. But it’s likely there is so much animosity from neighboring cities because Philadelphia is actually pretty freaking great. The culture is there. The foodie scene is there (including cheesesteaks, which automatically next levels them up in the food game). The distinct neighborhoods are there, giving the city the diversity we all love. And for those considering living in a big city, Philly is considerably cheaper when it comes to cost of living when compared to places like NYC. Sure, it’s a little rough around the edges, but that’s part of what makes it great. Philadelphians do enjoy their adult beverages as well as sportsand their love for their city is like no other. There’s a lot to love about Philly, and with their big Super Bowl win, now’s a great time to visit, because that love for Philly is now running rampant through every city block that make up the “Streets of Philadelphia”. And yes, I just ended that introduction with a Bruce Springsteen song title. Below are three neighborhoods worth exploring more. 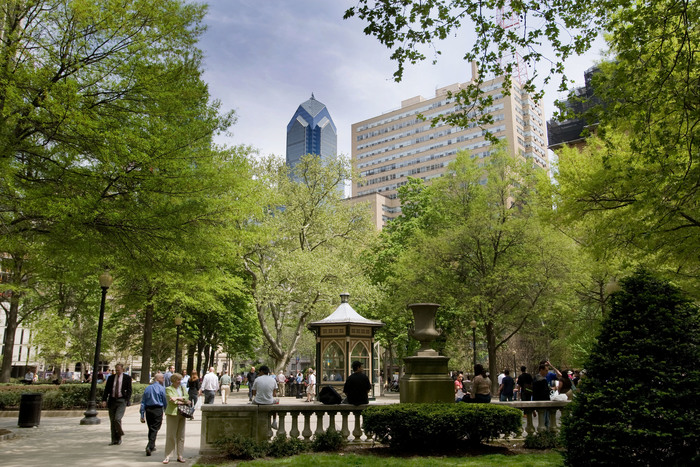 At times considered to be a posh area to live in, Rittenhouse Square isn’t just a enviable address, but instead it’s become the place to eat, shop and spend time in. It’s also where the majority of the bigger name hotel brands dominate, so it’s extremely tourist friendly.

The neighborhood buzzes with activity all year round, especially during the warmer months, where busy sidewalks are flooded with locals and visitors dining alfresco. All throughout, an eclectic mix of high-end stores, locally owned boutiques, small galleries and bargain stores line the streets. Rittenhouse Square is the actual one square block park that gives the neighborhood its name, and the green space is a hot spot from folks wanting to get a tan, to families and friends picnicking. The city’s best-known park is also home to various festivals, farmer’s markets, fairs and more, throughout the year.

· The Black Sheep Pub & Restaurant – This three-floor neighborhood pub offers hearty Irish-inspired menu items, a selection of quality drafts, TVs and friendly regulars. Brunch devotees stop in on the weekend for a traditional Irish breakfast and $4 Bloody Marys and mimosas.

· Drinker’s Pub – As the name suggests, this is a great place to get a drink, beer in particular. The bartenders pour a selection of craft brews, as well as old favorites like Yuengling Lager. 1903 Chestnut Street, (215) 564-0914,
· The Love – Restaurateurs Aimee Olexy and Stephen Starr team up againmuch to their fans’ delightfor this bi-level restaurant and bar. The American menu features fresh, seasonal food, as well as the most important ingredient: the love.

· Village Whiskey – Jose Garces puts his stamp on this pint-sized neighborhood bar, offering 100 varieties of whiskey, bourbon, rye and scotch alongside sparkling wines and American craft beer. The menu of major burgers, salads and snacks attracts its own crowd.

· Wiz Kid – In this foremost sandwich city, this shopthe third culinary hit from the team behind Vedge and next-door neighbor V Streetboldly specializes in vegan versions of the popular food group. So what do locals think of the plant-based iterations of the cheesesteak, Korean fried-chicken sandwich, cheese fries and ice cream? They’re eating them up. 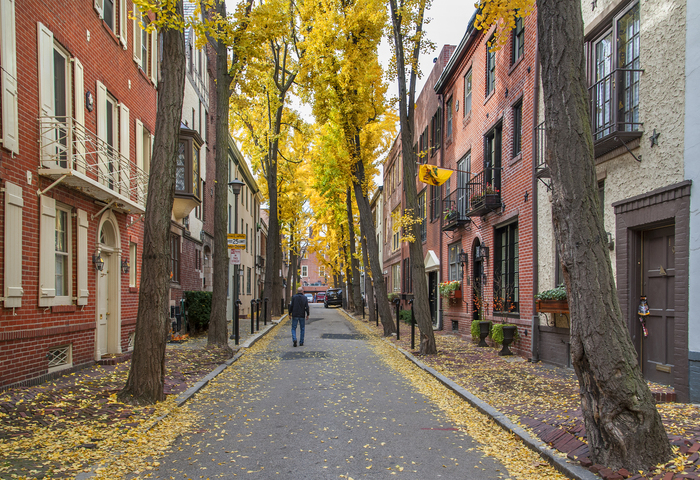 · Federal Donuts – People come here for one thing: deep-fried joy. It’s delivered in the form of Korean-style chicken, with a variety of rubs and glazes and available in sandwich form, and hot fresh or fancy doughnuts in constantly changing flavors like cinnamon brown sugar, blueberry pancake, strawberry lavender and chocolate eclair. Coffee rounds out the delicacies at this triple-threat.

· Nom Nom Ramen – These are not dorm-room noodles. Authentic Hakata-style tonkotsu ramen bowls come filled with mushrooms, bamboo, kelp, pickled ginger or soft-boiled eggs, among other ingredients. To master its flavorful broth, Nom Nom soaks pork bones for more than 24 hours to extract all the richness.

· The Print Center – Free and open to the public, this gallery was founded in 1915, a pioneer in its dedication to the appreciation of prints. Today, this vibrant nonprofit continues to encourage the growth and understanding of photography and printmaking as important contemporary arts via exhibits, publications, education and gallery shop with contemporary prints, photographs and other printed objects created by artists from all over the world.

· Philadelphia Art Alliance – Across the street from Rittenhouse Square, the Art Alliance showcases contemporary craft and design. Exhibits focus on craft as an active verb and creating an interaction between artists and audience in a distinctive historic setting. 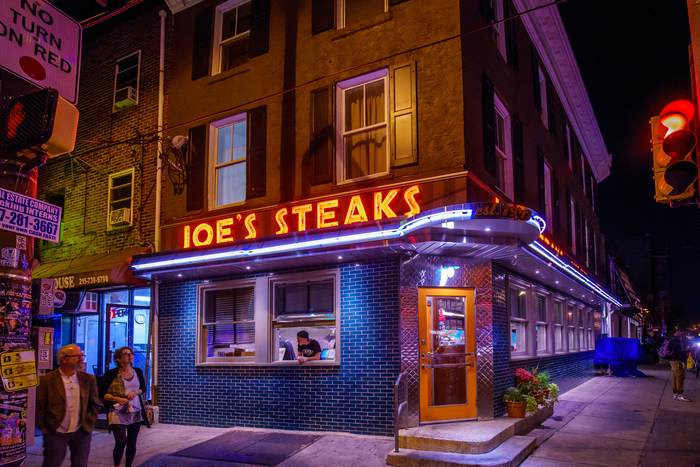 If a comparison had to be made, no, forget it. Fishtown is the hipster-ish, industrial part of Philly that everyone thinks is the coolest right now and its seen a massive influx of restaurants and bars as well as incredible music venues and forward-thinking art galleries, all things one would expect from a neighborhood like this.

It’s home to creative minds and with that comes some really unique experiences. Expect things like drinking a craft beer while playing vintage video games, trying out some Yugoslavian food, sampling a flight of craft whiskeys or visiting the world’s only pizza museum. 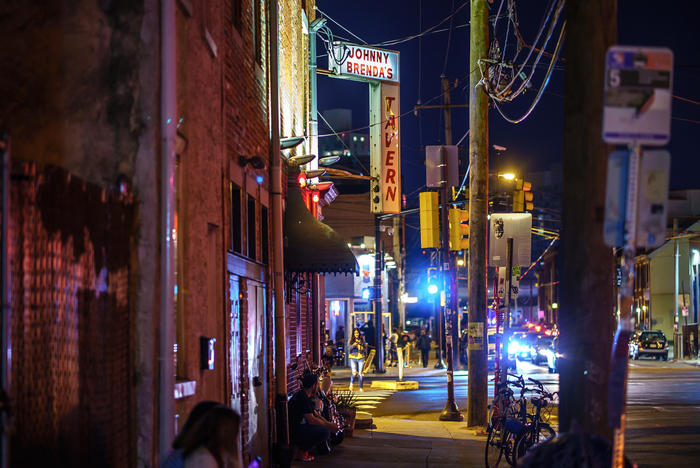 · Andy’s Chicken – Crispy, crackling Korean fried chicken served with a variety of saucesthat’s the star at this no-frills takeout spot. Chef Andy Choi’s take on Korean classics such as bulgogi, kimchi and pork fried rice round out the menu. Regulars know to call ahead to reserve their chicken for dinner.

· Barcade – Combine a sizable craft beer list with more than 50 25-cent classic arcade games, and the result is Barcade. Based on locations in Brooklyn and Jersey City, the bar-arcade combo also offers a generous menu and outdoor spacefor those who can tear themselves away from Tetris and Donkey Kong.

· Bottle Bar East – With a 16-tap bar, 700 cans and bottles, dartboard, foosball table, local art installations and a menu of grilled cheese, tacos, burgers, sandwiches and the like, this craft beer haven entices both Fishtowners and visitors. It doubles as a takeout retail shop, so patrons can fill up a growler or mix their own six-pack and take the party home.

· Fishtown Social – Wine bars don’t have to be inaccessible. That’s the thinking behind Fishtown Social, where wine novices and connoisseurs alike feel at home as they order draft wine, beer and specialty cocktails. The wine cafe also offers small plates and snacks, happy hour every day and a relaxed vibe. 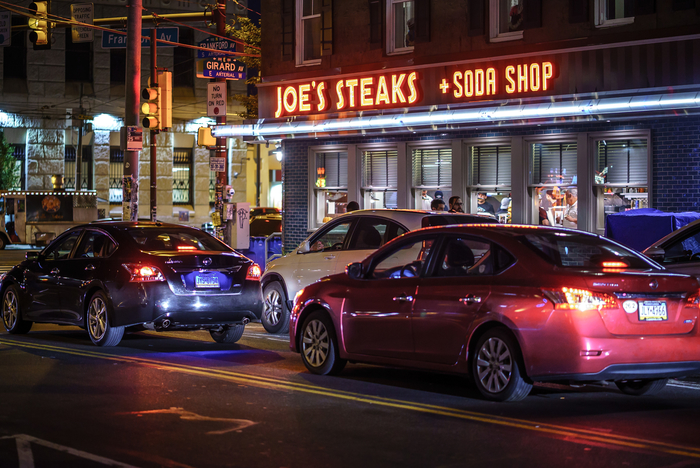 · Philadelphia Brewing Company – Housed in a restored 19th-century brewing facilitytechnically in neighboring East KensingtonPBC has been supplying its year-round handcrafted ales and limited-run microbrews to the city and beyond since 2007. Every Saturday from noon to 3 p.m., people pile in for guided tours and a generous number of beer samples.

· Rowhouse Spirits – Owner Dean Browne proudly distills and bottles all his products on-site at his East Kensington “limited distillery.” Thursday through Saturday, people can stop by to purchase the available products, tour the 1,200-square-foot space and enjoy a tasting, if available that day.

· The Fillmore Philadelphia – In a rehabbed former factory outfitted with giant chandeliers, exposed brick, a merchandise stand in a VW bus and the giant, photo-worthy LIVE sign at the entrance, The Fillmore matches its cool space with fantastic music. A 2,500-person main stage brings in national acts, and the more intimate 450-person Foundry space attracts DJs and local talent.

· Kung Fu Necktie – Think low lighting, inexpensive beer and one of the best-sounding small rooms in the city. Concert early birds can shoot some pool downstairs before heading to the second floor for intimate concerts and DJ events.

· Art Machine Productions – A shop, studio, gallery and tattoo parlor rolled into one, this 2,700-square-foot space provides plenty of working room for its featured artists. With such an impressive pool of talent, it’s no wonder that Art Machine has landed on Philly Hot List’s Best Tattoo Studio for so many years.

· Little Berlin – This undefined exhibit space serves as the gallery for the artist-run collective of the same name. Each month, a member puts together a new show. Music and other fun events round out the offerings here. 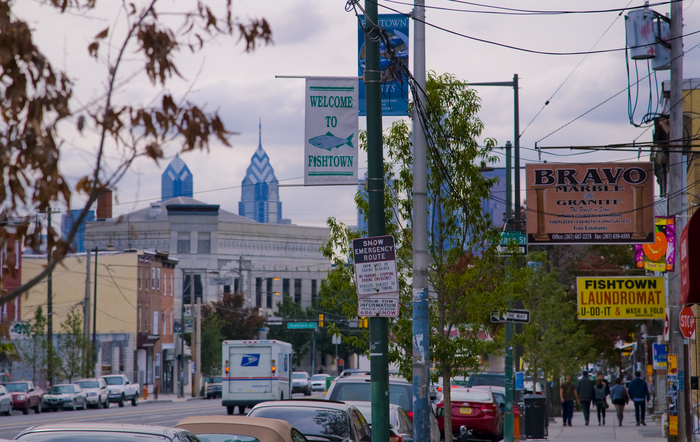 The historic Center City neighborhood is a combination of 17th-Century Park, Midtown Village, the Gayborhood and lots morebut let’s be real, it’s where the gays in Philly dominate. Just west of Washington Square, the Gayborhood, as its affectionately known as in Philly, is the center of LGBT life and culture within the city. Rainbow street signs proudly mark the neighborhood from 11th to Broad Street and from Pine to Chestnut Street. Within the Gayborhood is Midtown Village, a busy stretch of modern dining as well as shops and bars. 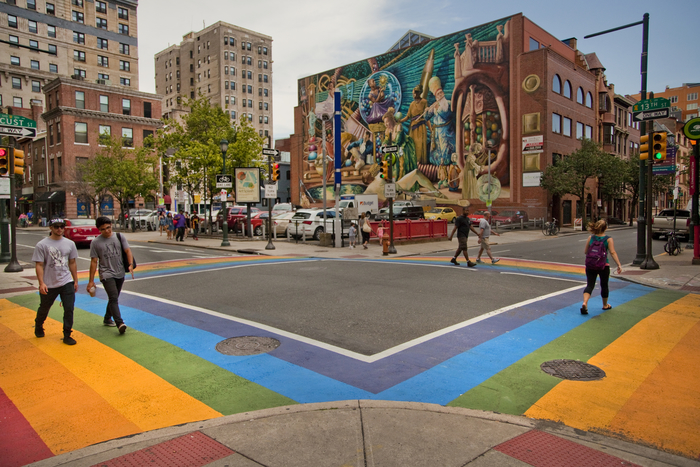 · 1225 Raw Sushi & Sake Lounge – A hidden favorite among sushi and sake lovers, 1225 Raw serves specialty rolls, traditional hot entrees and an impressive selection of exotic sake. During the spring and summer months, diners enjoy their sashimi in the outdoor courtyard.

· Sampan – Chef Michael Schulson’s 95-seat eatery is a feast for the eyes, with reclaimed timber and distressed metal accents. Guests dine on modern Asian small plates served from the open-air kitchen. Outside, the venue’s hidden Graffiti Bar is a stylish setting for alfresco drinks and snacks.

· The Bike Stop – This popular spot has served the gay and lesbian community for more than 30 years. It boasts four very different floors: The Bike Stop (main bar), The Short Stop (sports bar), The Pit Stop (open Wednesday, Friday and Saturday nights; fetish gear encouraged) and The Top of the Stop (special events).

· Charlie was a sinner. – From the team behind fast-casual vegan eatery HipCityVeg, this dark, alluring, vegan cocktail lounge is a bar first and foremost. With dark woods and dim lighting, the ambiance feels like an exclusive members-only clubhouse.

· Tiki – What happens when you mix Polynesian culture with a Californian ethos under restaurateur Jason Evenchik’s helm? A tiki-theme cocktail bar featuring two floors and a roof deck, all with plenty of food, drinks and fun.

· Walnut Street Theatre – The oldest continuously operating theater in the country, this National Historic Landmark produces award-winning musicals on its main stage and smaller indie productions in its Independence Studio. A limited number of Mezzanine seats are available for $20 for every main-stage performance.