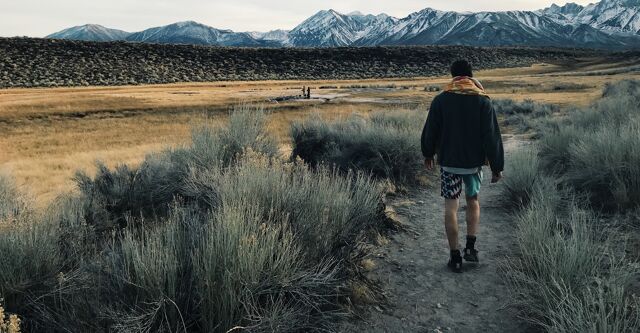 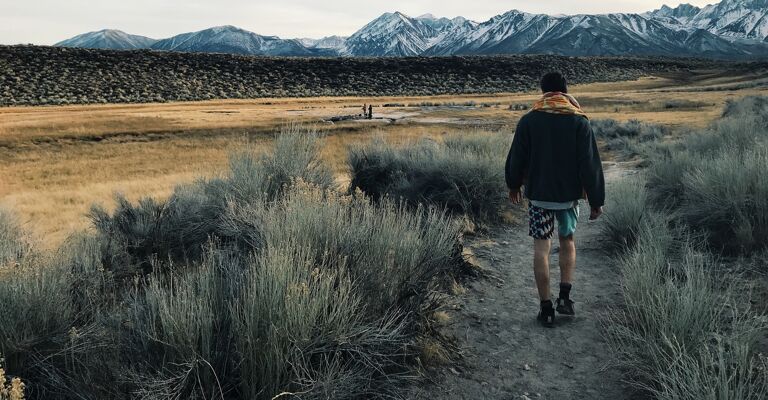 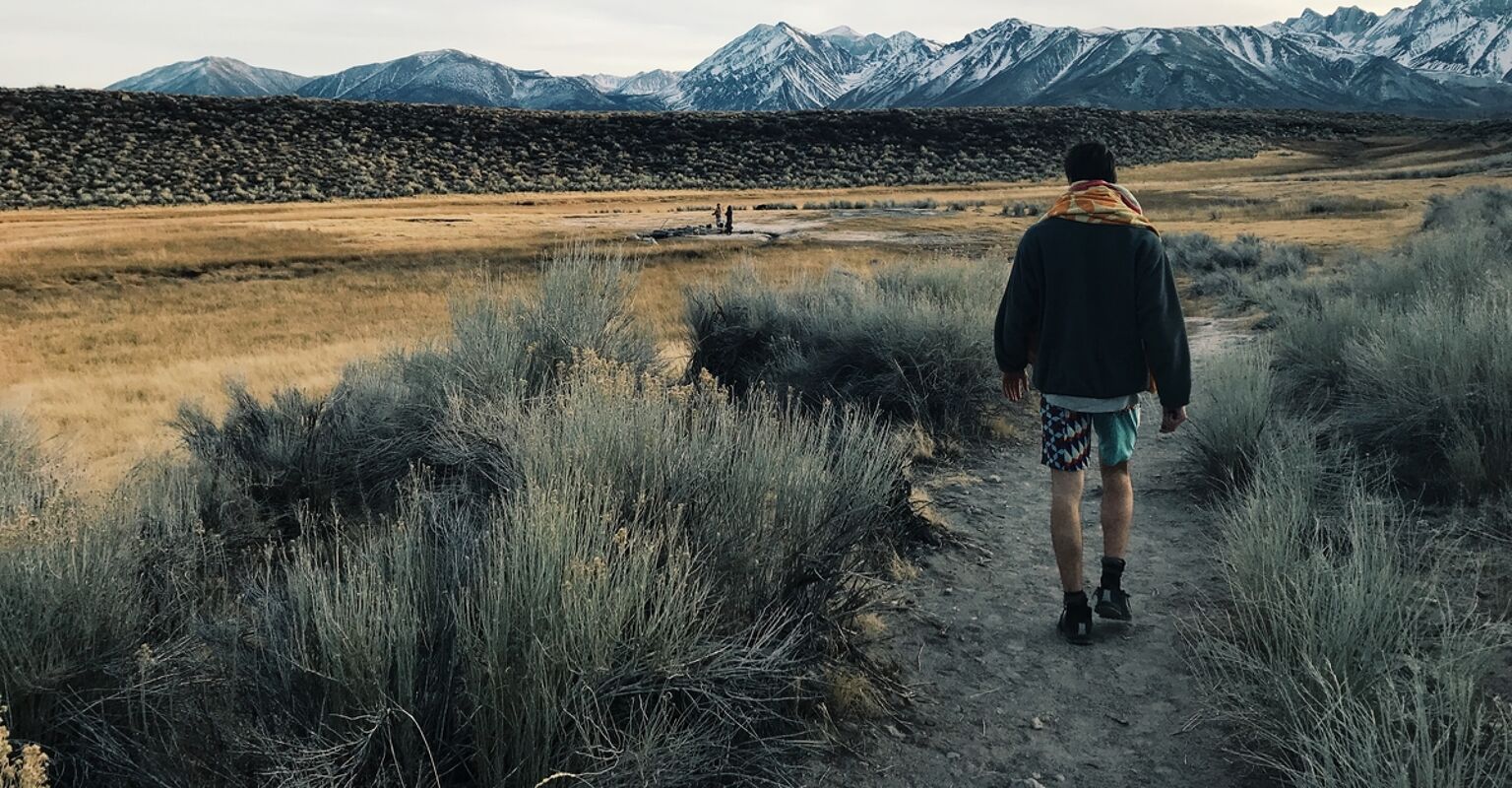 It is a worrisomely dry winter in the American West and it is especially parched in the eastern Sierra Nevada. If you snubbed the wind rushing over Mammoth Mountain this past week, you could hear the high country pleading for snow, clutching their pearls in embarrassment as their nude granite flanks were exposed for all the mountain enthusiasts to see.

Typically the famous peaks are generously clothed in thick white coats this time of year, but an forebodingly low snow year has left their crowns barren and their eastern hips lunar as they descend in a glorious swoop to the flats of California’s Owens Valley–a valley that is not only one of the deepest in North America, but also one of the driest, sunken 8,000 feet between two enormous 14,000 foot high ranges that begins below Mono Lake and empties into the Mojave in a desolate alkali flat. 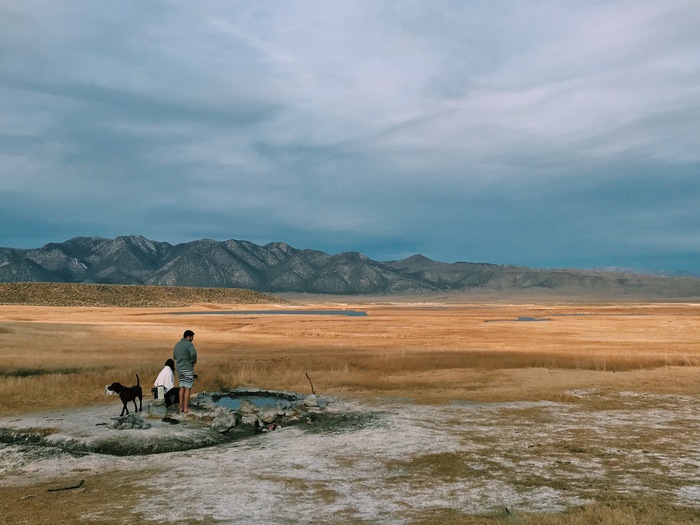 But somehow, the skiing at Mammoth isn’t terrible. In fact, it’s the Ben De La Creme of spring skiing: creamy, uplifting, and terminally delightful. With the fifty degree days, skiers and knuckle draggers wore shorts and ripped turns shirtless and sports bra-ed (it is still early February, need I remind you.) My friend (and international huck wizard) Jack and I did not join the shirtless contingent but we did ski our hearts out on the mountain day after day, until our calves, quads, hammies and glutes said enough, give us a soak!

One day after skiing, Jack and I kicked up the dust across the sagebrush north of Crowley Lake wearing board shorts, warm fleeces, sunnies, and flat brimmed ski hats: We were living for this apres-ski looque. We turned onto Benton Crossing Road in our sterling Subaru Outback from Highway 395. The road was grated and dirt and marked by a seafoam green relic of a church.

From this road, unmarked (but well known) hot spring pools have been cemented into the rabbitbrush landscape just beyond the great pines of Mammoth Lakes. Hiding in the hills and flats are little streams warmed by enduring geothermic fissures that trickle in swampy bogs and are hoarded by girthy pvc pipes into the small man made pools that unlike most hot springs, do not smell terribly of rotten eggs. 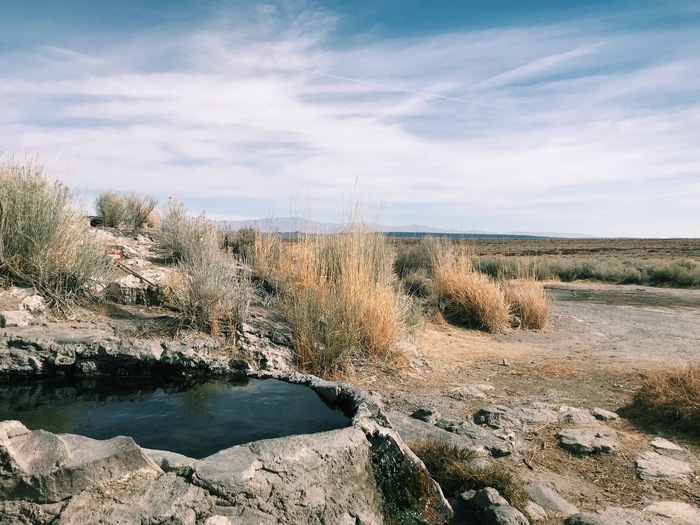 We arrived at a our first little pool called Crab Cooker, a hundred yards from the parking lot. We tossed our towels around our necks and mosied the single track trail. Our eagerness begot us. Just before we tested the waters with our bare big toes, we were warned by a man with no teeth, a ponytail beard, and a fistful of Bailey’s Irish Creme that the pool is too hot for bathing! Crab Cooker! We dipped those big toes regardless and concurred, it is too hot for our delicate mortal forms! We set off to the next spring, a bumpy ten minute drive through the beginnings of a sunset that we complemented with the funky rhymatics of Cymande’s “Bra” over the car’s sound system.

When we arrived at Shepherd’s, there was a couple enjoying the sunset with a twelve pack of Modelos but they welcomed us under the unwritten rules of hot springs: all are welcome to dip in the pool. We discovered that they are naked as jaybirds (the second unwritten rule of hot springs) but they are not shy as the water is filmy. They tell us that they both work for Mammoth Mountain as lifties.

With an eddy of cirrus clouds high in the stratosphere above the peaks and valleys of the region, we knew the sunset would put on a strong, gag-worthy performance. Most stupendous, was the reflection of the sky on the spring where slimy algae flaked off and swirled in the water chameleoning the ballet slipper pink sky. 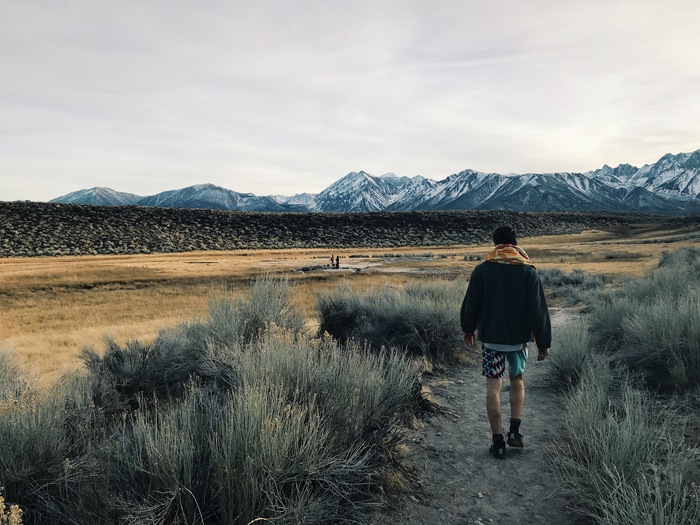 As the sunset progressed, our small tub overflowed as five more individuals joined. Four of them were couples visiting from Los Angeles and the fifth was another worker for the mountain who lived lived out of her car for the entire season, camping in the BLM land outside of the resort. The hot springs she said, were her only shower and she made a fire every morning to cook her oatmeal.

And soon enough, the toothless man drinking Bailey’s reappeared, sat on a boulder by the springs, rolled a sweet tobacco cigarette that smelled like peach and matched the swirl and fuzz of the sky, but after an hour (and presumably the weed rolled into the spliff) he told us he couldn’t understand a damn thing everyone in the hot spring was saying and that we were all “fucking nuts” but, that he loved as anyways. He wandered off into the sunset as his pony tail beard was tossed over his left shoulder by a chilled huff of evening breath. 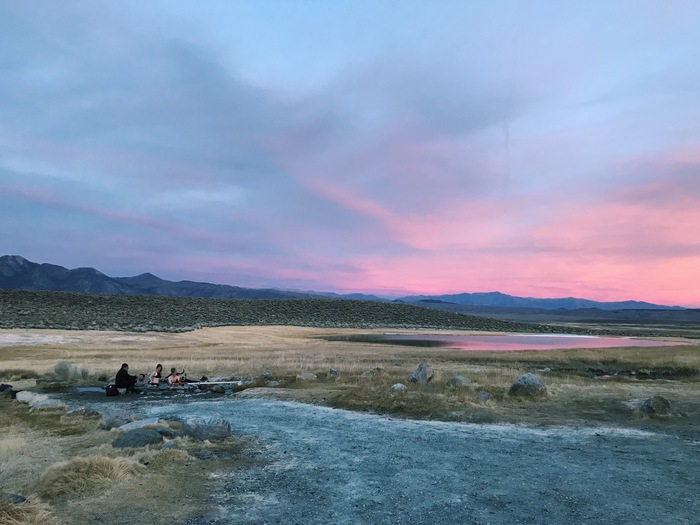 The sunset was of course ridiculous with that much cirrus and perhaps rivaled last month’s Joshua Tree sunset, but the unique opportunity to sit in a hot little pool in the middle of the sagebrush below 13,000 foot peaks and wait for the stars with a group of complete but friendly strangers, vagrants, lifties, skinny dippers, van lifers, joint smokers, wilderness protectors, and city slickers reminded me of the beautiful openness we forget to deal at bars, clubs, and restaurants as we cling to our comforts, friends, and wallets.

There is a sensation we’ve all felt when hot tubbing or hot springing. It’s the wizened pruning feeling when you know it is time to get out, but the comforts of the warm water loosening, relaxing, and sagging your body hold you possessively for hours.

But Jack was nimble and Jack was quick with the band aid rip and stood from the pool, rushed through the cold night air to dry off with a musty car towel. Moments like that, always need a leader and so we all followed, toweled off, bidded our adieus and approbations as our once intimate group petered off, went home to luxury AirBnbs, family homes, employee housing, vans, and cowboy camps for our own forty winks. 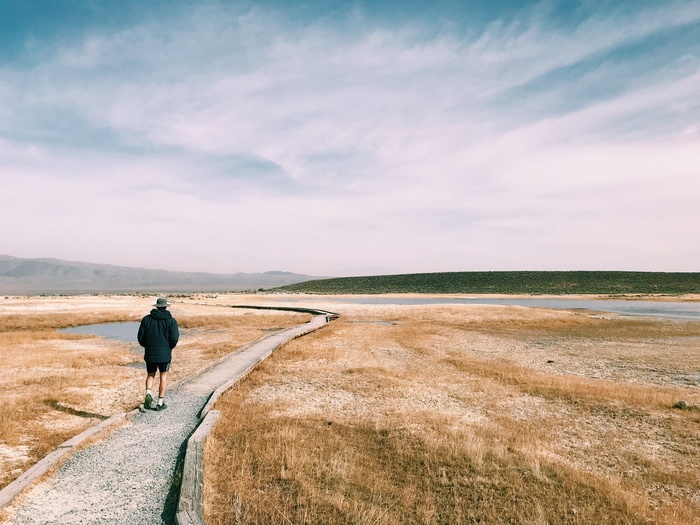