No guide can withstand the quick turnover and ever evolving swing that takes place in New York’s second largest borough. Designed for the first time visitor, this guide is Northwest-centric—grounding visitors in Williamsburg with excursions to Bushwick, Greenpoint, and DUMBO, but also an unexpected whisk to King County’s southern edge, Coney Island. Besides its many restaurants, cafes, and trend-setting storefronts, Brooklyn is a queer culture paradise, with a host of parties, readings, art galleries, and intellectual entertainment; it is, after all, the original home of Sasha Velour’s now international drag show, Nightgowns. And so, if Nightgowns is the ‘drag artist’s drag show’ then Brooklyn is the American queer culture aficionado’s home base.

Begin your weekend with a walk on the waterfront in one of Brooklyn’s newest (and cutest) parks, Domino Park. Located in Williamsburg on the banks of the East River, at the site of the historic Domino Sugar refinery, the park is now a long narrow ¼ mile strip with lounge chairs, a playground, a bocce ball court, a volleyball court, and a dog park. Designed in partnership with the same landscape company behind Manhattan’s esteemed High Line, the park also features a lovely suspended catwalk that stretches the length of the park from the gantry cranes to the tasty Tacocina restaurant. Watch the ferries zoom in and out of harbors, cars zip over the Williamsburg Bridge, and get five star iconic views of Manhattan.

Di An Di is one of Greenpoint’s newest Vietnamese restaurants and serves one of the meanest bowls of soup in the borough. When I visited, most patrons around me slurped up the #2 — the Beef Deluxe Noodle Soup, but it was the Pho Thin Ha Noi that stole the show for me. Owners Kim Hoang, Tuan Bui, and chef Dennis Ngo define the restaurant as “Vietnamese-American,” drawing from the Vietnamese food scenes of their native Houston and Northern Virginia. The space is bright, full of plants, and is the warmest welcoming meal to the borough.

9pm—Catch a Show at the Sawdust

The home of Sasha Velour’s Nightgowns when the iconic drag show isn’t gallivanting itself around the world, National Sawdust always has an incredible line up of talent, from musicians to performance artists. Coming up in the next month are shows like Neneh Cherry, Baby Dee’s Big Swan Song, and V Town, “the last bastion of resistance in an imagined dystopian near-future…a dramatic set of character studies in song.”

It’s worth getting up a bit early for a stroll through the 525-acre Prospect Park before grabbing a bite to eat at Meme’s Diner. Queer-owned and (mostly) queer-operated, the restaurant combines sinful comfort food and elegant drinks—think fluffernutter and stovetop mac and cheese alongside a mezcal martini. Its owners, Libby Willis and Bill Clark, described the restaurant as “very, very gay” to Jarry Mag, saying: “We really hope to make everyone feel comfortable.” They’ve trained their staff to use gender-neutral language as well as preferred pronouns. Best of all, every brunch starts with a free bowl of sugary cereal—I was a sucker for the marshmallows of the Lucky Charms.

Begin this scavenger hunt of a small part of Brooklyn’s queer history by seeing Green Pastures: Walls of Jericho (1938), by gay Harlem Renaissance sculptor Richmond Barthé, at the Kingsborough Houses. Continue to The Walt Whitman Residence on 99 Ryder Street, the only site in New York City associated with the poet, where it is said he lived while finishing the first edition of Leaves of Grass.

Continue to the Transy House in Park Slope, “a transgender collective operated by Rusty Mae Moore and Chelsea Goodwin from 1995 to 2008” that acted as a safe house for trans and gender non-conforming people. Finish with a trip to Brooklyn Heights and the Oliver Smith/Truman Capote Residence, where Capote lived while penning some of his most famous works, including Breakfast At Tiffany’s (1958). 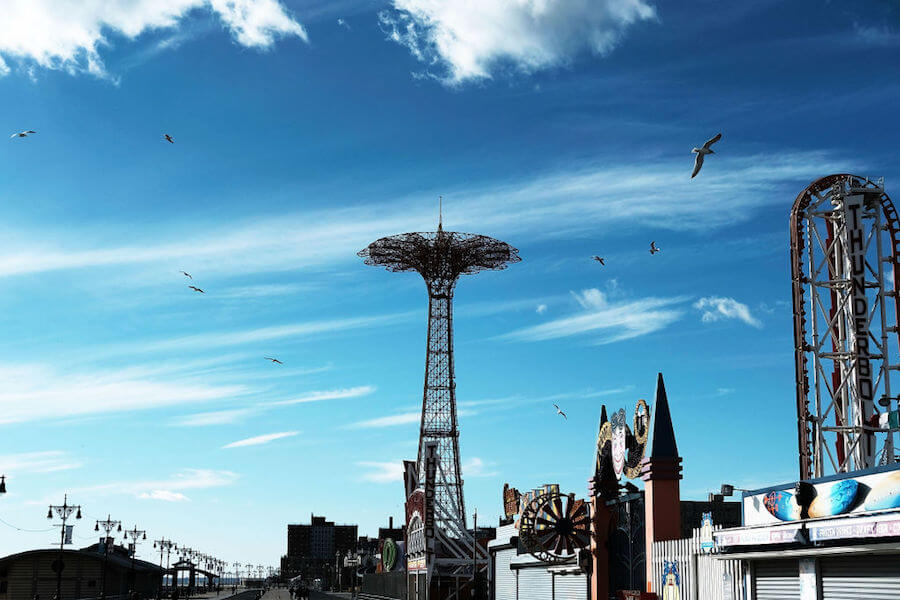 No matter the time of year, Coney Island always provides kitschy, campy entertainment. Summer offers the carnival enthusiast with thrills and funnel cake at Luna Park while winter presents a more austere landscape of bizarre contrasts, perfect for the experimental travel photographer. In any season, a walk along the Atlantic Ocean Boardwalk is a refreshing escape from the city and a visit to the Coney Island Museum or the New York Aquarium is an easy way to lose an afternoon.

Be ready to bring out the big bucks in Williamsburg—but even if you aren’t looking to spend, taking a stroll around the neighborhood and checking out the luxury clothing and design stores is always a hoot. Look for Pilgrim Surf + Supply for big-ticket surfwear, The Hill Side for more masculine styles, Concrete + Water for more feminine styles, and the brand new ALAND, the U.S. flagship store of the popular South Korean retailer that specializes in high fashion streetwear, to help give your closet a little bit more Seoul 😉

I mean, you’re not going to not have pizza while you’re in New York. For the classic pizza parlor experience, head to Paulie Gee’s Slice Shop in Greenpoint and make sure you bring a coat because there can sometimes be a line snaking out the door. From my informal questionnaire in line, the most popular pie seemed to be the Grandma’s. Looking for more pizza on your trip? Try the nationally famous Roberta’s near Bushwick on 261 Moore Street.

Some of the best performances, comedy, and poetry readings (as well as some great late night revelry) can be found at Bushwick’s Starr Bar, a Brooklyn staple for the performing and literary arts “that celebrates and supports movements for social justice.” Check their calendar for an up to date list of events ranging from the “Queer Abstract” variety show, to readings from issue launches of Femmescapes magazine, and even monthly swing dancing lessons on their lively Swing Night.

Writing a brief general guide to nightlife in Brooklyn is damn near impossible. With so many queer parties popping up left and right on different nights and first to fifth Fridays, it’s not easy keeping track. Check out our friends at Gayletter’s excellent weekend event round-ups (many of which take place in Brooklyn) as well as their informative party section. Here’s a list of a few favorites, catch them if you can!

Rotating parties like Papi Juice, Bubble_T, Hot Rabbit, and Onegaishimasu typically take place in Brooklyn but hop around from time to time.

Can’t find any pop-up parties while you’re in town? You can always rely on one of Brooklyn’s most popular queer bars, Metropolitan, for a Thorgy-Thorgeous time, or for a clubbier scene, check out Output, which hosts a variety of electronic acts and occasional queer parties like Horse Meat Disco.

Vinegar Hill House is one of the coziest brunch spots in all of Brooklyn, and it’s v. v. v. Brooklyn. Set beside the lovely cobblestone street at 72 Hudson Avenue, the restaurant serves incredible comfort food, but always with a twist. It’s hard not to fall for the apple sourdough pancake with Normandy butter or the cheddar jalapeno grits. Reservations, as with most joints in New York, are highly recommended.

After grabbing the noms, head over to DUMBO (Down Under the Manhattan Bridge Overpass) to the well-known (but always fun) Brooklyn Flea that’s been popping up below the Bridge on weekends since 2008. Open from April through October, the outdoor market is the biggest in Brooklyn—you can buy vintage clothes, antiques, art, handmade goods, smoothies, food, and coffee from wonderful, creative, and innovative independent vendors. Not only is it one of the most adored flea markets in the world, but as the Flea’s site claims, “Time Out NY named the Flea one of New York’s Essential Pick-Up Spots.” Visiting in winter? No worries, while not *technically* in Brooklyn, just across the river the indoor Smorgasburg + Brooklyn Flea Winter Market takes place on weekends at the Atlantic Center (625 Atlantic Ave. )

Located on “the right side of the river,” the Williamsburg Hotel is one of the many Brooklyn-chic hotels rising high above the East River. The Williamsburg stands out for its upbeat atmosphere, double-height ceilings, outdoor terraces, Manhattan views, and colorful rooms. Enjoy the hotel’s rooftop pool in warmer months, weekend parties, and the popular Sunday Jazz Brunch. The hotel has yoga classes onsite as well has free passes to the local Brooklyn Athletic Club. Be sure to zip around the neighborhood on the hotel’s complimentary bikes by day and the speedy chauffeured tuk-tuk by night. Rooms from $295.

Pod Brooklyn, Brooklyn’s first micro-hotel, offers cozy, clean rooms for the savvy traveler looking for wallet-friendly accommodations. The hotel blends their modular rooms with large, welcoming communal spaces like its rooftop bar ‘RFTP,’ a work/play lobby, four terraces, a fitness deck with seasonal classes, and beer garden. Best of all, the well designed layout makes it easy for the solo traveler to make new friends. Its prime location four blocks from the Bedford Avenue L train station and near the East River Ferry make it a great location to explore not only Brooklyn, but all of Manhattan as well. Rooms from $125.

If you don’t mind renting a room in Brooklyn with a host, there are rooms as low as $45 per night (plus booking and cleaning fees) that will allow you to pick a room for your stay exactly where you want to be in the borough. Rooms from $45 and up.