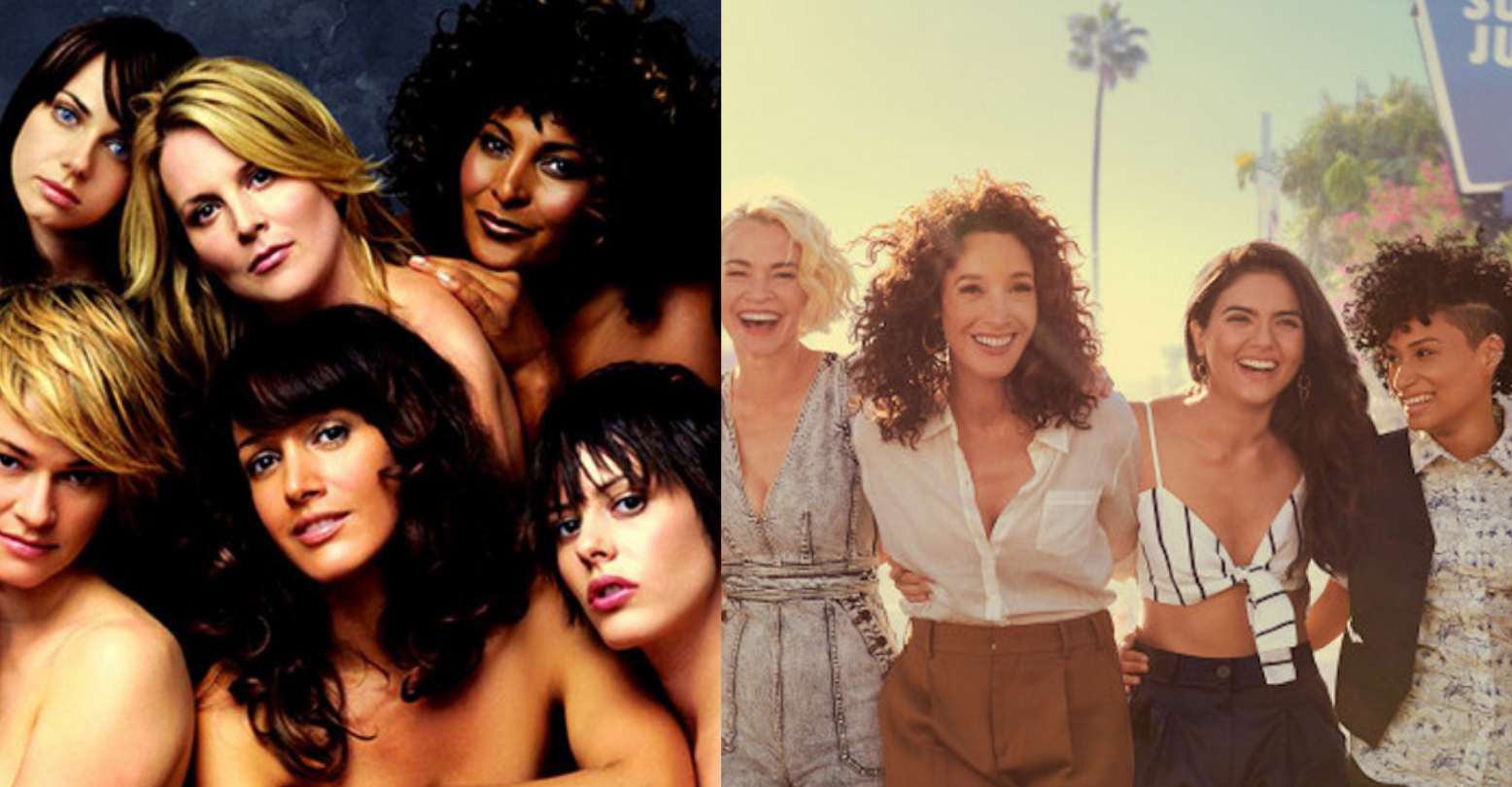 As Hannah Gadsby, that lesbian treasure, quipped in her 2017 comedy special Nanette: “Gosh, don’t my people love the feedback.” Oh, and don’t we. From the lavender menace of the Seventies to the very gay women’s soccer team suing U.S. Soccer for equal pay last year, we lesbians have never been afraid to speak truth to power with some good constructive feedback.

Arguably, of course, nothing has been the recipient of more lesbian feedback than The L Word.

Season 2 of The L Word: Generation Q wrapped up last week with a suitably dramatic finale, chockablock with simmering conflict, steamy sex, and a buffet of will-they-won’t-they romances both new and – in one very particular case– old (I’ll try to limit the spoilers here, but chances are if you’re reading this, you’ve watched the whole show twice, at least). And before the “Streaming a new show in 3-2-1” timer had even run down, the reviews came tumbling in – most of them pointing out all the ways another season of The L Word had missed the mark.

The LA Times lambasted its treatment of butch lesbians. Autostraddle’s editors bemoaned its treatment of Black lesbians. The podcast “To L and Back”, which discusses the show in hour-plus episodes so thorough they’re practically investigative journalism, groused that the season had imploded “not with a bang, but with a deeply confusing whimper.” Maddy Court – better known by her digital avatar,  Xena Worrier Princess, who reviews the show on her Substack blog – exclaimed, “This entire show happens too fast!”

They’re all correct. I have yet to read a criticism of The L Word that isn’t warranted. Micah Lee (played by Leo Sheng), the single trans masc on the show, seems to have no character motivation beyond making out with people while wondering aloud whether he’s into someone else. Bette Porter (Jennifer Beals), vacillates between having zero interest in examining her mixed-race identity and decrying the commercial exploitation of Black art in language so canned it sounds lifted from a Robin DiAngelo anti-racism workshop. Meanwhile, the show’s new generation of protagonists – already at a narrative disadvantage since they lack six prior seasons of character development – hurtle through story arcs like they’re in a slalom race, as if genuine representation means cycling through drama more expeditiously. Pace yourselves, writer’s room: we really do want five more seasons of this delightfully contrived hot mess!

We love The L Word, y’all, but The L Word is bad. We all know that. Why do we keep hoping against hope that this time – just this once – it will be different?

The L Word is bad. And the more it tries to do, the worse it becomes. The show was fairly bad from the beginning, when smirky Jenny manipulated herself into the starring role with bad boundaries and ill-fitting boyfriend jeans. But it got worse over time, as the show consistently attempted to broaden the narrow scope of its original focus. The show’s original creator, Ilene Chaiken, has always been clear about what she set out to do: tell stories from her particular circle of Los Angeles lesbians, who happened to be rich, thin, and cisgender, mostly femme and overwhelmingly white. How could she have guessed, back in 2002, that the sheer void of queer women’s stories in film and television would make The L Word a touchstone for nearly every queer woman in the English-speaking world and beyond? Yet as The L Word’’s aperture expanded to include queer women everywhere, the show’s blind spots came bounding into focus. It became impossible to ignore how many stories were missing in this everyman’s tale of lesbian life. The attempt to correct for that awkward misalignment gave us characters like Papi, a delightfully brash but ultimately tokenized version of Chicana queer identity. It gave us “The Contractor,” a lewd, blue-collar dyke with no name, whose sloppy vulgarity was a shameful mockery of working-class butch lesbians. And, of course, it gave us Max, the show’s sole trans masculine character, gifted a storyline so transphobic that I’m amazed the new series only coughed up one trans man to make up for his ill treatment.

The show was fairly bad from the beginning, when Jenny manipulated herself into the starring role with bad boundaries and ill-fitting boyfriend jeans.

Because that’s the new series’ downfall, after all: whether it acknowledges it or not, it is constantly in conversation with the original. Call it The L Word: We’ve Really Cleaned Up Our Act! Watching these last two seasons, I was disappointed, but not surprised, by how the new series lashes itself to the promise of atoning for the past. There’s not much else it can do, really – what else is a reboot than the coda to a tale already told – but the show’s mission to “get it right this time” is so creatively limiting that the result manages to be both dull and cringeworthy. Generation Q tries to hand a sliver of story to everyone who huddles under the tent of “queer women”; it tries to hold a mirror to everyone who longs to witness themselves onscreen. But great stories are not told in slivers, and a great show will never – could never – be everyone’s mirror.

The L Word is bad. And the more it tries to do, the worse it becomes.

An illustrative example: the way season 2 handles the relationship between Shane McCutcheon (Kate Moennig, inexplicably rocking the same haircut she slayed us with in 2004, before some of you were born), and Tess Van De Berg (the mind-bogglingly elegant Jamie Clayton), who go from colleagues to lovebirds over the course of the season, with an awful lot of sighing and high-stakes poker in between. As Clayton, who is trans, explained in an interview with The Cut, Tess is a cis-gendered character, a choice that came out of conversations Clayton had with Gen Q showrunner Marja-Lewis Ryan. Whether this was the right decision or the wrong decision is irrelevant: we all know that whatever decision, someone wasn’t going to be happy about it. You can’t have it both ways.

We want it all, because we’ve still got so damn little.

And yet – they try anyways! The writers of this meshugganah show managed to create a character whose onscreen gender identity is a triumphant coup for trans actors – and write her into a story SO BORING that it left me filling in the blanks with a trans narrative anyways, which, to me, gave their relationship a depth and nuance that the writers missed. There is a tepidness to the show’s approach to Tess – a tepidness from which Clayton, who is incredibly talented, does her damndest to burst free – as if the fear of getting it wrong is stronger than their courage to tell a rich story about a unique person. Tess, like so many characters in this show, becomes flattened by that fear, existing in a strange liminal space where she lacks enough substance to alienate anyone, and so manages to leave everyone feeling a bit shortchanged. I don’t care if Tess is a trans woman or a cis woman: I want her to talk, laugh, love with all the depth and texture of a whole human being, whose story reflects the truth of her life – a singular life, not a Greek chorus of lives squeezed into one person’s story.

This is mostly our fault, and we know that. We want so, so much of The L Word – how could it ever get it right? We want to see ourselves, but we don’t want to be tokenized. We want great stories, but we want affirming depictions of queer love. We want it all, because we’ve still got so damn little.

That, in the end, is the great albatross of The L Word. 17 years after it launched, it remains the only lesbian ensemble drama on television. Even as queer representation has exploded across media, we still need what The L Word has to offer. It will always get it wrong, and we’ll always keep watching: talking about its wooden dramas, laughing at its ridiculous missteps, and loving it all the same.

But isn’t that the point of The L Word, too? Even in all its maddening, chaotic glory, it is pushing open doors that a new generation of creators will step through, making whole these stories only half-told. I like to imagine that every time The L Word does it wrong, someone watching whispers quietly to themselves, “I could do that right.”