The 20 Queer Qs series seeks to capture LGBTQ+ individuals (and allies) in a moment of authenticity. We get to know the subjects, what makes them who they are, and what they value. These intimate conversations aim to leave you, the reader, feeling like you just gained a new friend or a new perspective.

This week, get to know comedian, entertainer, and co-host of the Las Culturistas podcast, Matt Rogers. Learn about his hopes for the LGBTQ+ community in the future, what his queerness has given him, what he feels insecure about, and more.

1. What do you love about the LGBT community? The various point of views you get within it. I think something you think before you’re actually in the community, is that everyone is the same. You see a kind of antiquated image of the gay community on television, especially in the 90’s when I grew up. The community is so varied, interesting, dynamic, and I’m happy to be a part of it. 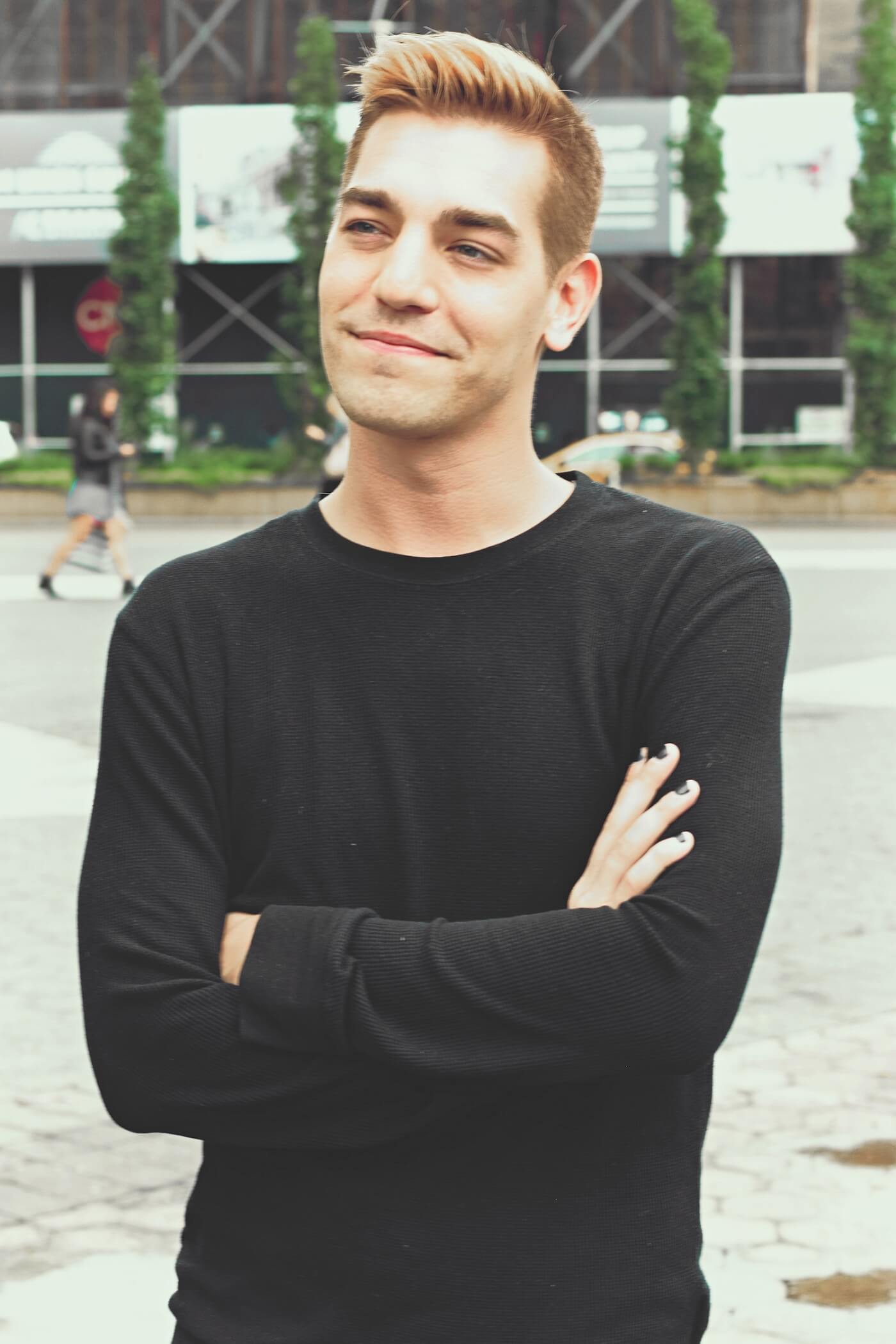 2. Do you think it’s hard to make queer friends? I don’t think it’s hard, but I definitely think you have to get over yourself. We make it harder for ourselves, and I think one of the symptoms of being gay is that you second guess yourself all the time because that’s what we’ve been told to do and that doesn’t make friendships easy. I’m lucky I’ve had my friends that I’ve been close with for 10 years and having people to go out with and meet people with has made it easier, but when you meet someone new when their super interesting, you feel like you want to make sure you’re good enough for them and I think the insecurity that we all have that is ingrained in us just due to the experiences we’ve been through. That’s what makes it hard to open up to people in terms of friendships and romance.

3. What does pride mean to you? It’s the sense of safety in operating in your full potential as a human being and that’s expressing your joy to the max and having that received by the people around you.

4. Do you think LGBTQ+ youth have it easier now? I don’t like this hierarchy of struggle. Every individual is going through something and I think we need more compassion across the board. I don’t like it when my generation scolds the younger LGBT community. I think we have a lot more in common than we think. I’m so reverent and appreciative of the older generation. They had to go through something I couldn’t even imagine. It’s tragic what this community went through during the AIDS crisis and I think that’s trauma that’s with this generation and they’re angry because they never had to go through that.

I think we look at the younger generation and think, “Wow you’re allowed to be gay at 11 years old.” But at the same time, we don’t know what it’s like to have social media surround us at all times. When I say I don’t like the hierarchy of struggle, I don’t like to compete in terms of pain. I think everyone is entitled to their experience and what’s important is that we have compassion, it’s not that we remind each other that we’ve had it harder than anyone else, even if it’s true. Because it is, there are sects of this community that have had it extremely difficult. Specifically speaking about trans women of color, [they] are the most persecuted, disrespected, berated, and pursued negatively people on this planet. I think it would be ridiculous on this planet to say that they didn’t have it rough every single day. But I also think we should have compassion for everyone. In terms of these younger kids, they’re still grappling with their identity and are still in the minority and still need compassion.

5. What advice do you have for LGBTQ+ youth? Don’t be afraid of other individuals that are also different. Foster relationships with people that you find a connection with. If you feel a connection, foster that, because your community is going to be your family one day. 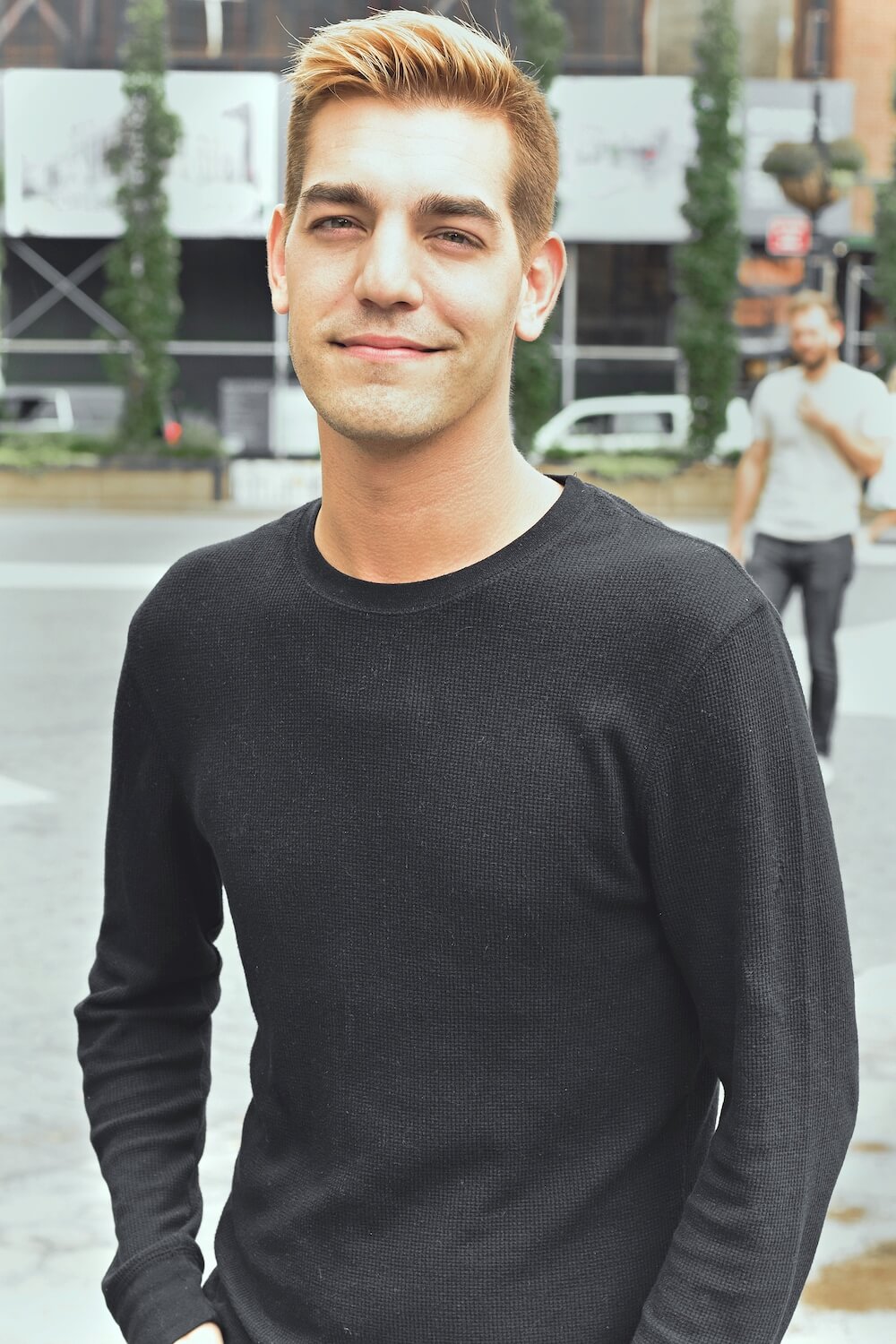 7. What are values that you look for in an ideal partner? Patient, non-judgemental, gets it in terms of humor. You don’t have to be funny, you just have to get it.

8. Describe what being queer is like in 3-5 words. Girl, we are getting there.

9. What are your thoughts on people who say “masc4masc”? They’re people who are not going to get my attention or anyone’s attention who’s worthwhile. It’s a ridiculous thing to say which is a gross symptom of our community which is the app culture. It’s one of the ways in which the ugliness in our community is living out loud. It’s so gross and we’re so much better and [more] beautiful than that.

10. What hopes do you have for the LGBTQ+ community in the future? Happiness. I hope that for everyone, I hope that everyone can just get to a point where they say I love myself as much as I pretend to or as much as I see. I hope we can walk the world and be safe.

11. Is there a LGBTQ+ TV show or movie that has had a great impact on you? RuPaul’s Drag Race had the greatest impact on me, because the concept of “You’re born naked and the rest is drag” changed my life. … I realized that there are no rules, the only rules that you make are the ones that you impose on yourself. And that is so liberating. 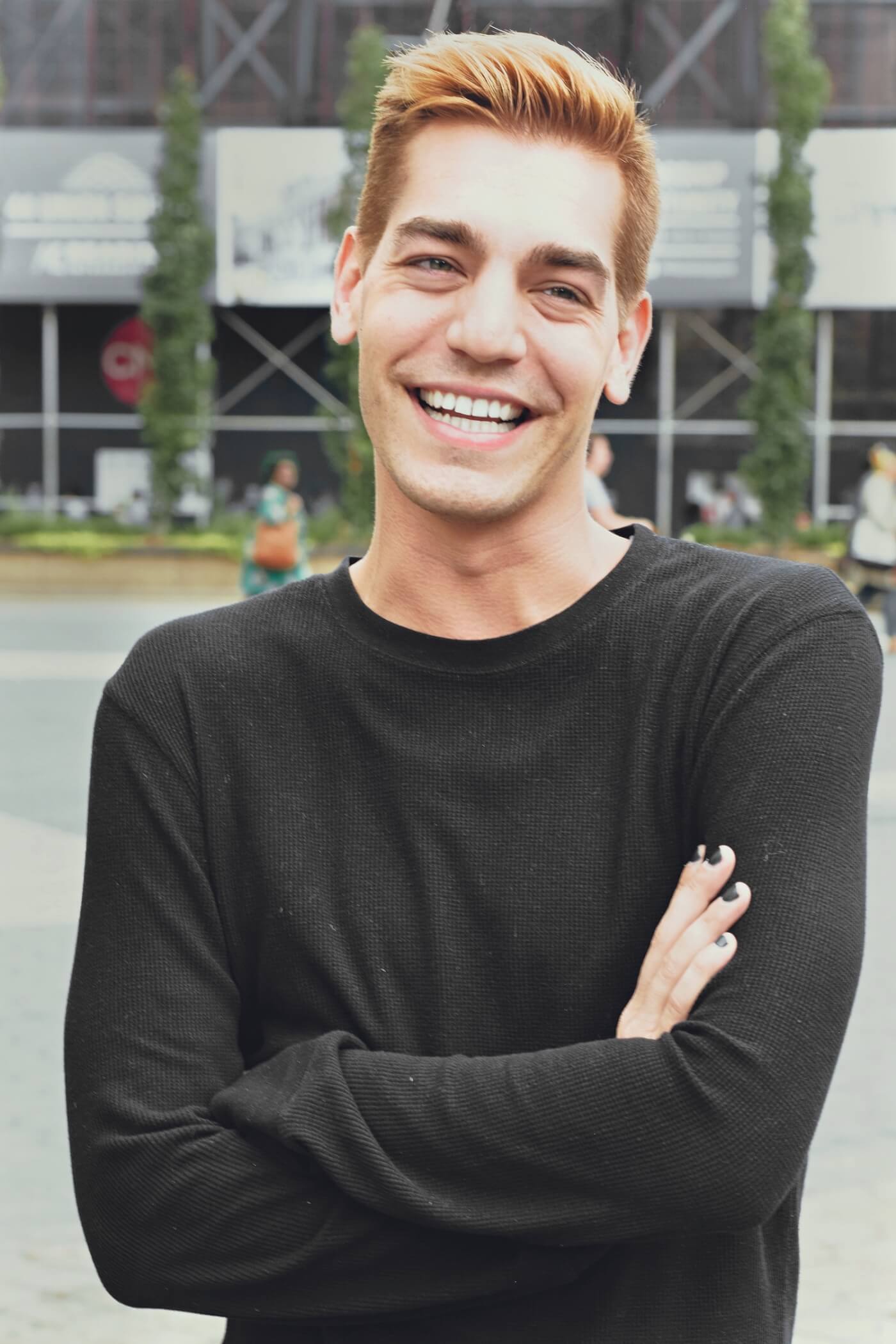 12. What’s your earliest memory that you felt you were different? When I was little, the characters that I wanted to act out in the yard were all female — and my parents acted weird about it. My mom even asked our doctor about why I was doing that and the doctor said,  “It’s because he’s very smart, he wants to take on different personas.” I was perceptive enough to understand that my instincts were not “normal,” and it was gauging that from the reaction they had.

13. What do you feel most insecure about? My body,

14. What do you feel the most confident about? My sense of humor.

15. What’s your relationship with your family like? Very good, very positive, I’m very lucky in that regard and I see them often.

16. Have you found your chosen family? How do they make you feel? Absolutely 100%, and I’m so lucky. Oftentimes when I’m at Thanksgiving with extended family I’m like, “Why aren’t i with my real family?” It’s so true what they say, it’s such an integral thing for a gay person is to find those people

17. On a grading scale from F-A, how is life for you right now? A-. In the grand scheme of things, I can eat, I’m out here pursuing my goals, I do what I want, I have good family, my family and friends are healthy. 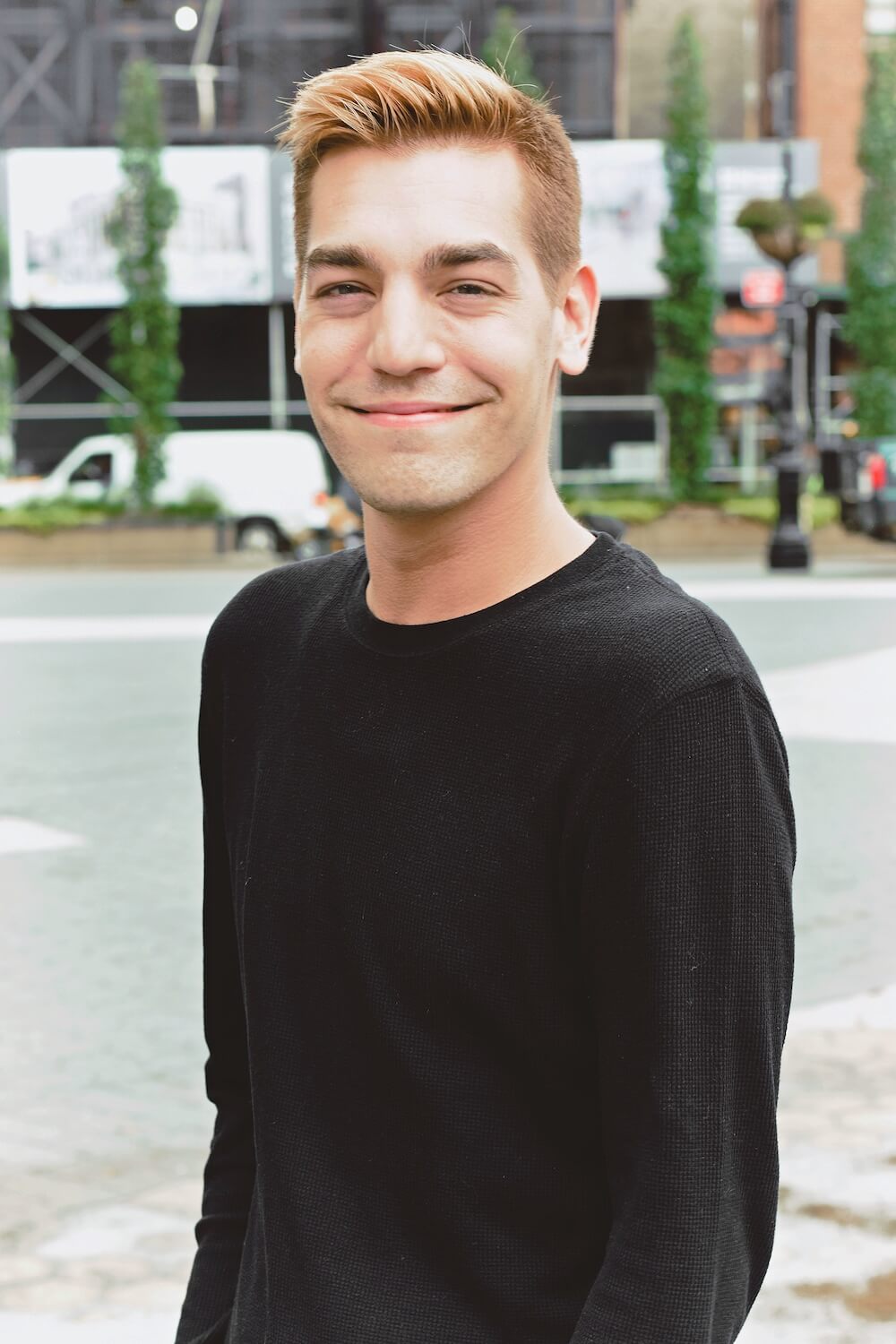 18. Have you ever felt/do you still feel uncomfortable holding another guys hand in public? Yes, unfortunately because no matter where you go, you are exposed and you hear horror stories. This is something I think people need to understand. You cannot fully understand the full experience of someone who is different or a minority because you don’t have those small instincts. Like when I hold someone’s hand in public, that’s marking yourself vulnerable and there’s a lot of crazy people out there.

19. Who is someone in your life who gets you? Bowen Yang, my best friend understands me 100%. We have a sort of sixth sense with each other, we’re very empathetic to each other, we often speak in the same cadences at the same time.

Listen to Matt’s podcast Las Culturistas wherever you listen to podcasts. Keep up with him and his upcoming shows in NYC and LA on Twitter and Instagram.