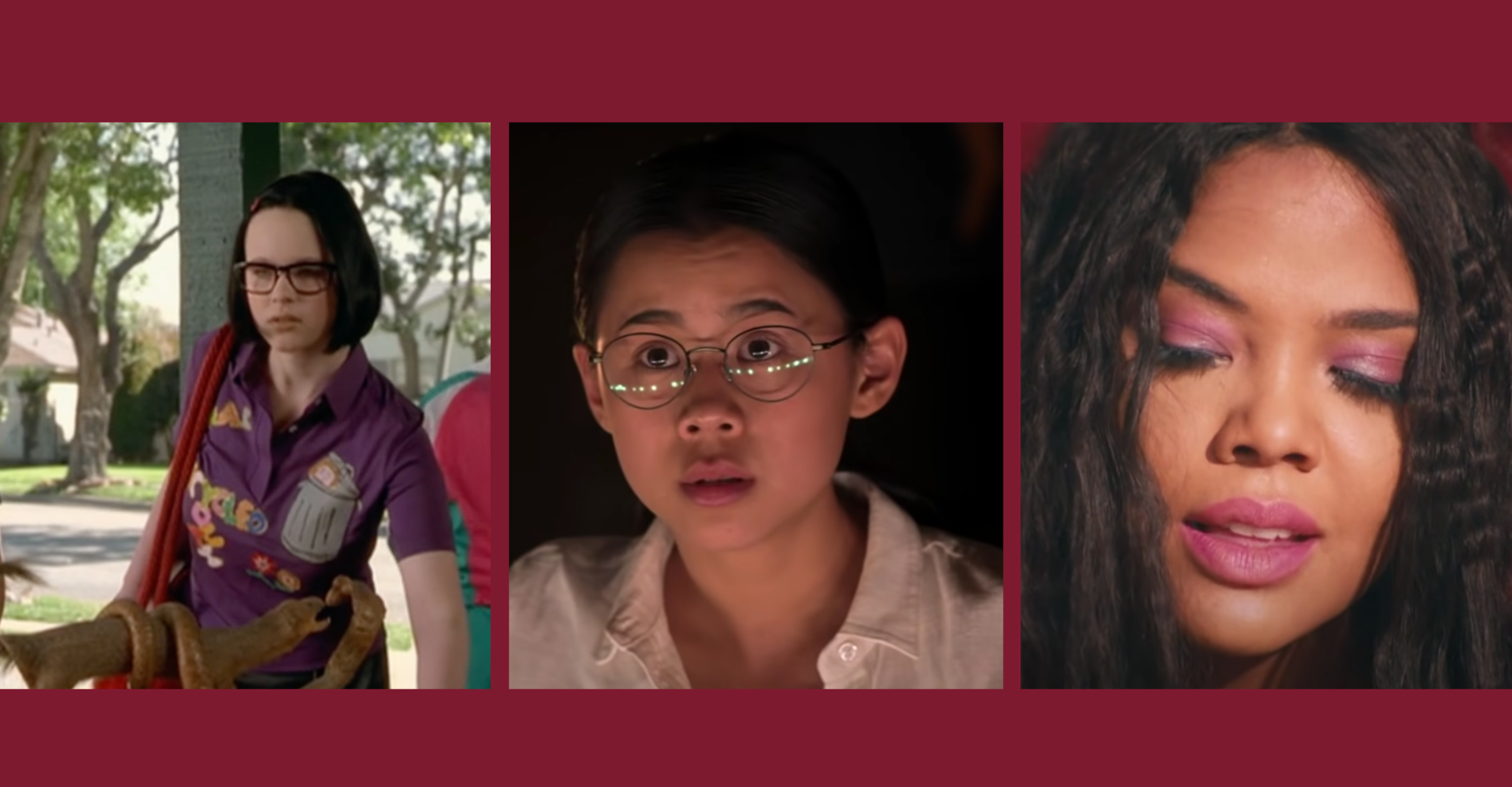 Welcome to Hair Week on INTO! This week, we’ll be exploring the thing we love to hate the most: our hair. Queer hair is a whole thing, and everybody’s queer hair journey is different. Today, we humbly present a few of the queer onscreen cuts that left an indelible impression. And yes, we realize that “Dykes to Watch Out For” is not onscreen media! Yet…

We’re starting off with a big one: this was the queer haircut to end (perhaps begin?) all queer haircuts. When this acid-trip of a film debuted in 1982, nobody knew what the fuck to make of it. Aliens, cocaine, and lethal sex injections? It was a lot, and to be frank, it still is. The thing that stands out is Anne Carlisle’s dual performance as model Margaret and her arch-rival Jimmy had people talking. And they were talking about the hair, also the makeup, which gives Euphoria a run for its money (see entry #9.) This was the era of the Madonna mullet, and Carlisle wears it well.

2. Gary Oldman and Chris Tucker in “The Fifth Element”

Coming in at number 2, we have two absolute icons serving looks aplenty in this iconic 90s romp. Because it’s “the future,” everybody’s hair and outfits are peak 90s. There’s a lot of plastic dresses and zippers, but the hair is truly on point. We’re first introduced to Chris Tucker as talk show icon/ proto-Lil Nas X figure Ruby Rhod, a genderless, leopard-print loving weirdo who scream-talks through every line. Later, we get to meet Gary Oldman as Jean-Baptiste Emmanuel Zorg, the film’s chief antagonist. Not to be outdone by Ruby Rhod, Zorg sports an amazing side-bang shaved head look that is the envy of each and every club kid to this day.

This Seeso show (remember Seeso?) didn’t last long, but it made a distinct impression. In fact, it came out so long ago (2016) that both comedians have since divorced and one of them (R.B. Butcher) has come out as trans/nonbinary. Does that stop the hair on this show from being THE GAYEST? Not at all. It was here that the wider world was first introduced to Cameron Esposito’s signature side-cut, given to her by an Echo Park hairdresser named Pony. This cut is not just gay, it’s the epitome of gay haircuts in 2016. It’s got everything: length, buzz, bangs, and an asymmetrical silhouette. What’s queerer than absolute hair chaos? Absolutely nothing.

When we’re talking about Shane from “The L Word,” it’s hard to pick a quintessential queer ‘do that stands out. Shane is a hairdresser after all, and every haircut she has in this show is a variation on a kind of awful early oughts shag, but hey, it’s Shane, people love Shane for whatever reason. I guess it’s because she’s “sexy” or whatever? Sure. Season 2’s haircut, while messy, is probably the most expressive of what Shane is actually going through during this season (the best season, because it’s the Shane x Carmen season.) When Shane falls for Carmen, she immediately cheats on her with Rosanna Arquette for no good reason at all. If you’ll remember, that weird pairing happened as the result of an EROTIC QUEER HAIRCUT Shane gave to “Cherie Jaffe” in Season 1. When Shane returns in Season 2, she’s older and wiser but still a horrible fuccboi. The hair really says it all. She’s left behind the longer Jack White look of the first season for a Jack Skellington aesthetic, and because it’s Shane, it works. How dare she!

Not only is lesbian bicon Tessa Thompson sporting crimps that call to mind Lindsay Lohan’s iconic turn as Lexi in 2002’s “Get a Clue,” her queer hairdo appears literally between the legs of Janelle Monaé, who is wearing VAGINA PANTS. It’s been four years and I’m still not over this video, how COULD I be?

I mean come ON!

I rest my case.

Mystique is a gal known for having blue skin, an ability to shapeshift, and really great hair. Whether you prefer the JLaw versions or the Rebecca Romijn versions, the hair is forever on point. It takes style to pull off slicked-back red hair, and Mystique has got that shit for miles. Also, she can shapeshift, which means she can technically take on any hairstyle she wants. That’s gay.

The queer haircut that started it all–literally! When aging inventor Vincent Price decided to create a humanoid robot man named Edward, he up and died before being able to give the kid human hands, resulting in the fearsome monstrosity that suburban America nicknamed “Edward Scissorhands.” Price also died before he could do anything with that fucking hair, which to be frank, looks like my hair when I wake up in the morning. But, you know, make it chic. Because it’s a young Johnny Depp, he pulls it off–but just barely. Taking a page out of Robert Smith’s handbook, this ‘do is wild, wacky, and will not be tamed! Which is odd, because Edward is a hairdresser. But whatever, who cares. No squeeze tube of got 2 be gel is about to tame this baby queer mane!

Gina Gershon’s butch ‘do in this movie may have launched a golden age of half-mullet, half-bob lesbian haircuts. As Corky, Gershon plays it tough and leans into her hard-talking, blue collar persona as the lesbian plumber out to save Jennifer Tilly’s Violet from a violent hetero relationship. What helps her accomplish this goal? Her haircut. It makes men underestimate her and makes women want to fuck her, and that’s true power. As usual, the Wachowski sisters knew what the fuck they were doing.

9. Every last person on “Euphoria”

Much has been said about the makeup on this show, but let’s give some love to the queer hair going on. Whether you’re team Jules, team Rue, or another one-syllable name, these kids are fucking stylish, and they’re all gay. The hair definitely speaks to this hypothesis. We get flowing dresses, fantastic bobs, and some retro one-strand-hanging-over-the-eye action. And let’s not forget Sydney Sweeney’s classic athlesbian ponytail! Also: barrettes.

Mountains moved, seas parted, and the earth positively SHOOK  when Alison Bechdel’s lesbian lothario Lois from her “Dykes to Watch Out For” strip went from her signature flattop to a baby queer “Perot” in 1992. At least, that’s what I imagine, because I was 4 years old at the time. The decision to give Lois a haircut wasn’t taken lightly: after shaving her head and sporting a sassy front bang, Lois would never again change her hairstyle. This was a haircut that helped Lois grow into her adult persona, which was actually kind of a proto-Shane archetype, but less obvious. Mo would basically keep her “KD Lang fringe” for the rest of the series run, and most of the other characters stuck with one ‘do for about 30 years. That’s gay commitment!

Birch’s one-barrette bangless bob in this movie is a bit unsettling at first, but like the Lisa Loeb album it appears to pay tribute to, it grows on you! This is an iconic lesbian cut passed down to us by way of canon lesbian Velma of the “Scooby-Doo” franchise, so you know it’s gay as fuck. Also, this movie is extremely sapphic. It’s about how Thora Birch and Scarlett Johansson are in love but don’t know how to be, and I’m committing to this plot synopsis. Go back and rewatch it, you’ll see that I’m right.

Lean Lewis’s performance as queer teen Ellie Chu is heartfelt, understated, and very hair-focused. There are all kinds of lesbian ponytails out there, but this specific middle-part ponytail speaks to Ellie’s queer yearning. As a lonely outsider in her small, mostly white community, Ellie finally finds (and falls for) her lesbian ponytail counterpart in Aster Flores. While Ellie falls in love and struggles to be seen by her classmates and her crush, her hair plays a large role. Those two loose strands of hair falling out of the tight ponytail show us that Ellie will someday feel confident enough to let her hair down, literally AND figuratively, with someone who actually sees who she is.

As one of the most relatable characters ever committed to film, Fabiola Torres struggles with her queer identity, her place in the lesbian community, and her commitment to being a perfect student and friend. One thing she doesn’t struggle with? Her hair, which is fucking awesome. Fabiola’s curly bob gives her power: for all the ways in which Fabiola is struggling to hide her true self away, her hair always announces who she is: the smart, sensitive, and utterly hilarious friend who takes in the world around her with spirit, spunk, and curiosity. When she meets her match in Eve, the bottle-blonde femme with a butch haircut, sparks fly instantly, and a romance between two people with amazingly good hair begins.

14. Cartoon Madonna in the Who’s That Girl credits

Special shout-out to Madonna scholar Smoking Barrel for this pick. Who could forget the cartoon credits and manic energy of this weird lil’ Madonna movie? More importantly: who could forget that haircut. Obviously, they’re leaning into the Marilyn Monroe thing here, but there’s something Betty Boop-esque about that blonde bob. And yes, even though Madonna isn’t queer it definitely counts, because let’s face it, Madonna in 1987 was and is queer culture.

Tags: Cameron Esposito, Edward Scissorhands, Fabiola, Fifth Element, Film, Liquid Sky, Madonna, Never Have I Ever, Queer Hair, Queer Haircuts, R.B. Butcher, Take My Wife, The Half of It, Who's That Girl, Zorg