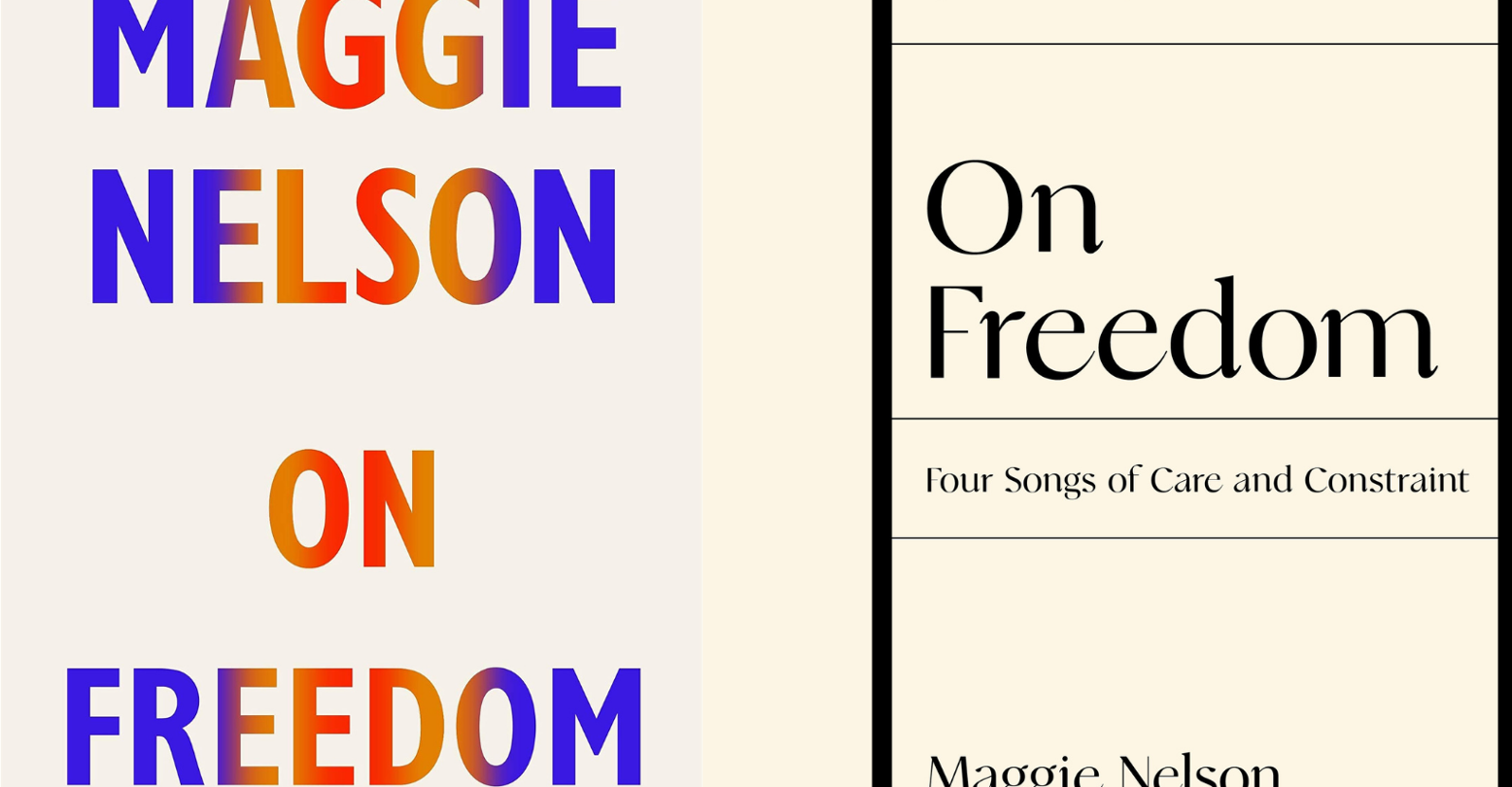 So many people are mad at Maggie Nelson, and I can’t tell why. This isn’t a situation unique to Maggie Nelson: not at all. When you’re in the queer and trans community, you’ll notice that someone could be a huge community hero one minute (2016) and persona non grata the next. Why does this happen? I don’t know. Is it largely arbitrary? Seems so! In Nelson’s case, this is what I’ve been able to find out:

-In 2016’s The Argonauts, Nelson’s most commercial “hit” to date, the writer discusses being pregnant while in a queer relationship. She discusses her partner, the trans artist Harry Dodge, in ways that certain members of the trans community found exploitative.

-Nelson has been accused of inserting herself into queer narratives, though she herself is queer.

-Nelson’s new book On Freedom: Four Songs of Care and Constraint was recently panned by Andrea Long Chu, noted trans pan artist. Chu accused Nelson of the ultimate queer literary crime: being mediocre. Basically, the consensus is that this shit is dry, overly academic, and not actually about what it’s supposed to be about.  “Maggie Nelson could etch sentences into a grain of rice if she wanted to,” Chu writes of the MacArthur “Genius” Grant recipient. “So why write an academic book?”

Here’s my question: why not?

Critics taking On Freedom to task are focusing on the fact that the book is at times muddy, rhetorical, loopy, and wandering. And that its subject—the idea of personal freedom and how it correlates to the ever-evolving Discourse—is somehow left unproven in some way. But Nelson isn’t out to prove anything. She’s done the personal, and she’s done the political, and in several books (Bluets, Argonauts, Jane: A Murder) she’s combined both. What On Freedom is is a very old-fashioned type of book. Yes it’s polemical, and at times obnoxious. But that doesn’t make it any less interesting for what it tries to do.

It’s trying to hold in its hand a thing that’s changing too rapidly, and far too publicly, for anyone to be able to actually write about.

Honestly, sometimes you need a dry academic book to remind you that real thoughts exist out there, beyond the dumb conversations we have with friends online or in the halls of academe. In the past, we had things called cultural critics who would just write books about capital A “Art” or “Society.” These books were admittedly dry and for the few, not the many. They weren’t supposed to be pop-psych paeans to the glory of how we live now. They were supposed to be read by people who desired, perhaps foolishly, to be a tad smarter than they were before. They weren’t easy, or entertaining, or necessarily fun. They represented work that you didn’t have time to do on yourself, but which felt worthwhile of study.

On Freedom tries to hold in its hand a thing that’s changing too rapidly, and far too publicly, for anyone to be able to actually write about.

Nelson’s book—by turns astounding, inspirational, and deeply depressing—takes a look at the future of humanity and finds it, in a word, iffy.

“One of the most vital things we have to impart, both ourselves and as students,” Nelson writes, “is the importance of making time and space for one’s art in a world that will always threaten to diminish it.”

The reality of our lives on earth—our freedoms on earth—is that they’re doomed to come to a close. This isn’t just the mortal contract, it’s the promise of a world that is forced to keep spinning after all human life is rendered untenable. Nelson, then, in choosing to grapple with freedoms in the realms of climate change, sex, death, procreation, and free speech, is taking on a subject that is almost laughably impossible to truly contend with. That’s why the book hedges its bets: It’s not about pointing out a grand truth in the middle of 21st-century American life, but if it roots out a few on the way, it’s because Nelson has attempted to do the impossible. She wants to contend with our time and everything that came before it, and everything that will come after. In “On Freedom,” the known competes with the unknowable for center stage. “Thankfully,” Nelson explains at one point, “just because you can’t know everything doesn’t mean you can’t know anything.”

On Freedom–composed of four distinct essays regarding the notion of freedom in different contexts—constantly sends quotations flying at you, many of them bumping up against one another or even in the middle of each other. The effect is of a poly-vocal argument that’s being had between people who, in ordinary circumstances, cannot or would not be in physical dialogue. They would not find themselves in the same spaces, or cities, or countries, or even periods of history. This quotation-heavy way of making a point might seem clunky, ugly, and overly-academic, but it’s to a purpose. The critic and biographer John Lahr works the same way. In his introduction to his 2014 masterwork Tennessee Williams: Mad Pilgrimage of the Flesh, he explains why he took the specific approach he did to framing Williams’ story. “In my attempt to bushwhack through [Williams’] vertiginous paper trail, my goal has been to stick closely, though not exclusively, to the people…to whom he spoke his heart,” Lahr explains. “To create a sense of the immediacy and the drama in his connections to these people and to create a mosaic of quotation and interpretation…I have intentionally let their voices but up against each other on the page.”

Unlike the story of a single individual or work of art, which often has an easy beginning, middle, and end, Nelson’s story is in flux. Her subject is constantly changing.

This, I think, is what Nelson is doing, too. Her subject, as Williams was to Lahr, is a dramatic and immediate one. And unlike the story of a single individual or work of art, which often has an easy beginning, middle, and end, Nelson’s story is in flux. Her subject is constantly changing. The fact that she can’t keep up with Twitter shouldn’t be seen as a fault of her work, but a symbol of her humanity. Twitter doesn’t write books: it offers opinions through which one may sift in order to find one’s personal view of the truth. Freedom of speech, in that realm, goes hand in hand with our individual freedom to interpret. And within that, there can be no right or wrong.

She leaves the ball in our court, and that’s a generous action for a writer.

Is that an ugly thought? Is it weird? I don’t know. I just found Nelson’s willingness to wade through the confusing, often relentlessly depressing waters of modern discourse brave and thoughtful. I wouldn’t want to write this goddamn book, and neither would anyone else I know. We need Nelson to do this work for us, I think, so that we can keep thinking our own way about it. Either we like what we see in the world, or we don’t, Nelson argues. Both stances are political. In not coming down on a fixed opinion about the state of the world, Nelson leaves us with a trail of evidence to do with what we will. She leaves the ball in our court, and that’s a generous action for a writer.

What she does explain, and beautifully, is that there is never a fixed context for anything. Not art, not addiction, and certainly not our ideas about the future. More often than not, Nelson uses this quote-against-quote method as a way of busting through binary thinking. At one point, grabbing a salient quote from Paul Preciado’s Testo Junkie, which Nelson covers in her second essay titled “Drug Fugue”, she points out the impossible position of the trans person in political life:

The problem, Nelson explains, is that we’re served these issues, via the framework of the media, in the format of either/or, when the range of ways to think about the problem are endless. That, too, is a problem of freedom. Too many thoughts, too many options. It doesn’t stop there: In her climate change chapter, she makes some of the most pointed, brilliant observations about climate change and apathy that I’ve yet heard, writing that: “The inverse relationship between the scale of the climate problem and our difficulty engaging with it isn’t just a cruel irony, or another opportunity to squabble over the proper traffic between the personal and the political. It is one of the structural features of the crisis.”

That’s the greatest tragedy of all, isn’t it?

The point of On Freedom isn’t to be a fun or even breathtaking read. It’s a take-your-medicine kind of thing. You read Nelson as an exercise for your brain. And in terms of exercising that organ, On Freedom does just fine. It’s a book that offers heavy observations buttressed by competing, often disagreeing quotations. What is freedom? You won’t find out by reading this book, and that’s not the point. What this book will do for you is offer a framework for deciding, on your own terms, how you make decisions in favor of, or against, your liberal will to do better. And honestly, I find that valuable. Why read a book that comes to a conclusion? More importantly: why read a book where the author makes it clear from page one that they’ve already made up their mind on the complex subject they’ve offered to parse for us?

Listen, I’m not saying On Freedom is flawless. But this summer, when I got my ARC in the mail, I’d look forward to the moments after work when I could go to the park and sit with Nelson, watching her sort through all the endless thoughts and quotes and contexts imaginable in an effort to bust open this huge, loaded, oppressive idea for us peons. And it was nice. It was a journey, and, unlike with most books written by modern-day authors, it took me on a journey I actually wanted to go on. I’ll probably read On Freedom again, in a different time, maybe a more desperate one. Whether it stands up then will be the true test. But for now, I like it.