Despite the considerable progress that LGBTQ representation has made in the past few years, GLAAD is anything but, well… happy. Earlier this year, the queer media organization discovered that films released by Hollywood’s major studios in 2017 featured the lowest percentage of LGBTQ characters that we’ve seen since 2012.

This downward trend becomes even more discouraging when you crunch the numbers. Indiewire reports that back in the ‘90s, 48 films with a queer lead character grossed over $1 million at the box office and in the 2000s, this number tumbled down to just 20. Although the current decade isn’t over yet, the 2010s are following a similar trajectory, and unless there are a few sequels to Moonlight coming our way that we don’t know about yet, then it looks like these numbers will continue to decline for the foreseeable future.

This might all seem surprising given the current climate that we’re in today. After all, Love, Simon became the first high school studio movie to star a gay lead and recent heavy hitters like Carol, A Fantastic Woman, and Call Me By Your Name all proved to be a huge success with critics and the awards circuit alike. However, it turns out that such adoration doesn’t necessarily translate into ticket sales.

In fact, a quick glance at the domestic figures on Box Office Mojo reveals that Carol, A Fantastic Woman and Call Me By Your Name don’t even crack the top 25 highest grossing LGBTQ movies of all time. Despite being the first queer movie to win Best Picture at the Oscars in 2017, Moonlight threatens to be eclipsed too, barely scraping its way into the top 20 with earnings of just under $28 million, and even Love, Simon is stuck on the outside of the top 10, looking in. In their place is a range of older and less authentic portrayals of the queer experience. 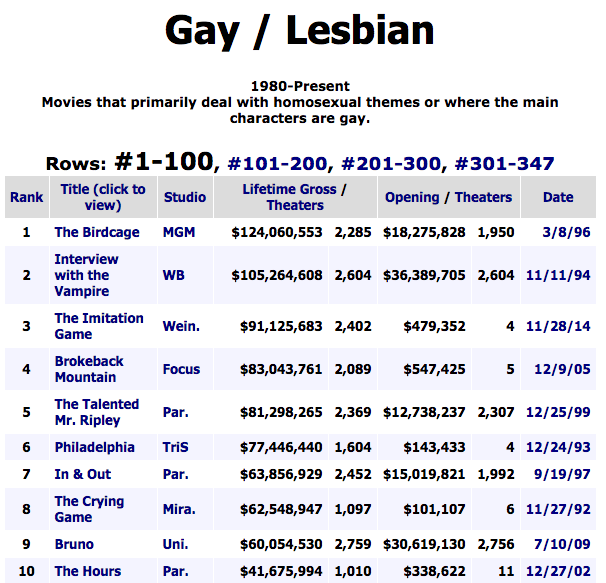 Although more LGBTQ films are making the transition from arthouse to the multiplex than ever before, a closer look at the highest grossing queer movies reveals that only one release from this decade even made the top 10, and that’s The Imitation Game, which came out back in 2014.  As prestige biopics go, Morten Tyldum’s film is thoroughly entertaining and must be commended for shining the spotlight on a gay hero like Alan Turing. However, the way it skirted around the sexuality of its protagonist was all too familiar for queer audiences who have become used to seeing their orientation erased onscreen.

While the top 10 also features beloved LGBTQ classics like The Birdcage and Brokeback Mountain, other high grossing entries are a tad more problematic as well. At the time they were released, both In & Out and Philadelphia broke new ground for queer representation in Hollywood, portraying LGBTQ leads in a sympathetic light, but they both also took the ‘sex’ out of ‘homosexual’ in fear that audiences wouldn’t condone such an honest depiction of queerness.

The Crying Game went one step further and tricked audiences into sympathizing with a trans lead only to then make their big gender reveal a punchline, and the fact that Stephen Rea’s character then vomits in response is even more offensive.

Similarly, Sacha Baron Cohen’s role as the Austrian fashion journalist Brüno in the mockumentary of the same name was also derogatory to the LGBTQ community. Sure, the entire project was designed to highlight institutionalized homophobia in our society, but these good intentions were often overshadowed by the character’s constant need to perpetuate exactly the kind of stereotypes that gay men have fought so long to dismantle.

Based on this chart alone, it would appear that ticket sales for queer movies are on the decline and those that do fare well often offend as much as delight. Of course, such figures fail to tell the whole story. Aside from the release of Love, Simon, 2018 was also the year that The Shape of Water won several Oscars, Blockers told a poignant coming out story and Deadpool 2 depicted a lesbian superhero relationship. None of the latter films are primarily considered to be LGBTQ movies, though, which is why they don’t appear on this list, no matter how popular or progressive they might be. 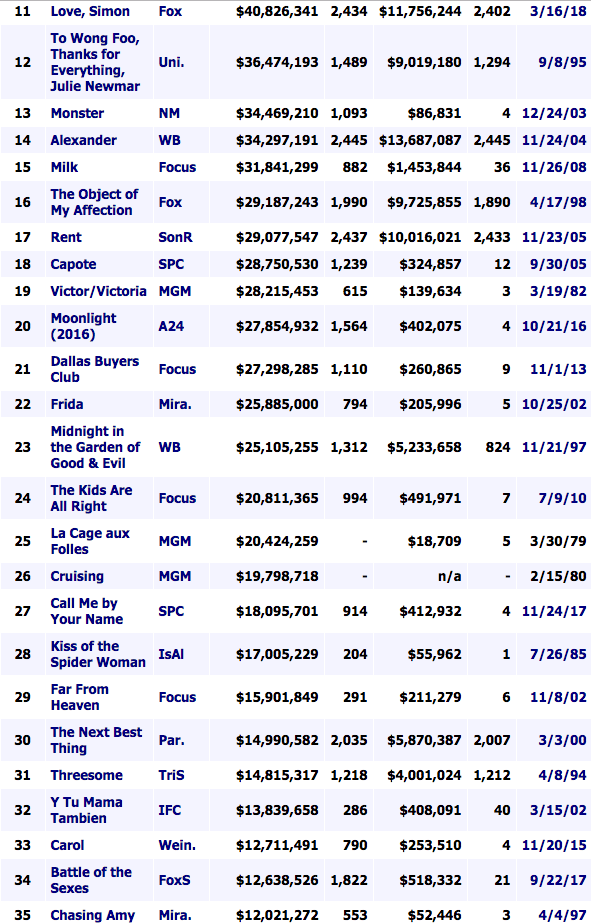 Still, what matters most is that wide-reaching movies like those found in the top 10 are the ones that represent the LGBTQ community to the masses, so it’s important that they aim to portray us in a positive light. Unfortunately, the majority of these films are older and remain either problematic somehow or fail to associate queerness with sexuality in any kind of modern or meaningful way.

Earlier this year, GLAAD challenged the major studios to include queer characters in 20% of their annual film releases by 2021. Recent hits like Black Panther, Crazy Rich Asians and, of course, Love, Simon have already proved that catering to marginalized audiences can help sell even more tickets by tapping into markets that are starved for representation. If Hollywood wakes up to this, then we could soon be looking at a far more modern representation of the queer community on this list, and future films in the vein of Carol and Call Me By Your Name can finally replace the outdated views of movies like Bruno in both the box office charts and society at large.