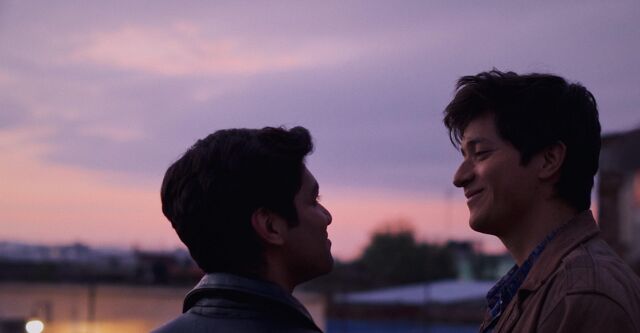 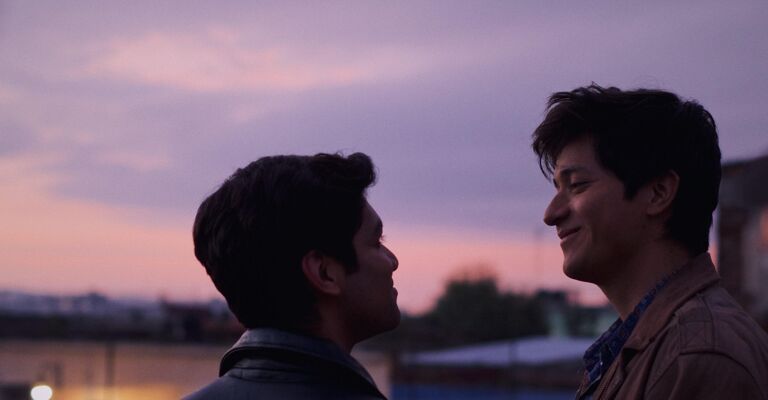 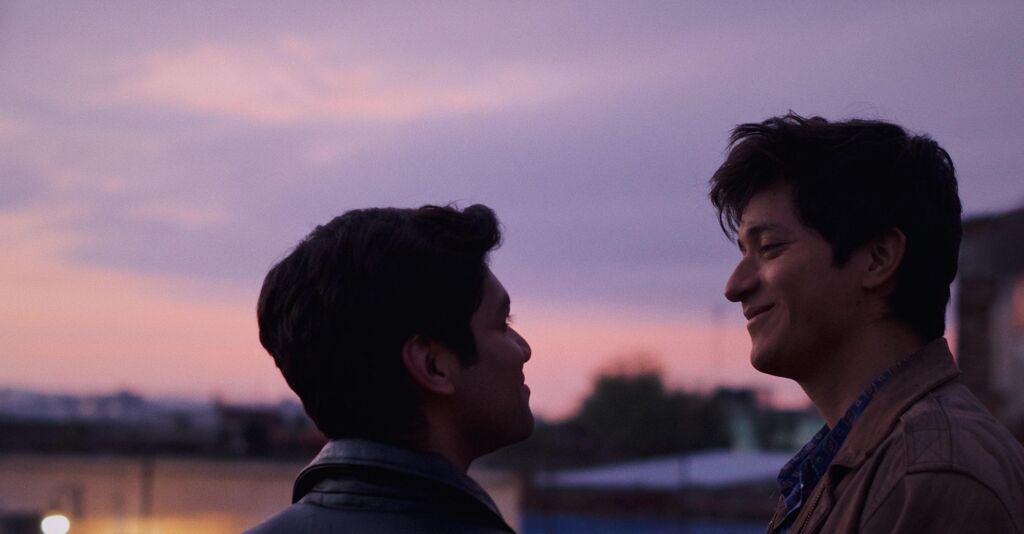 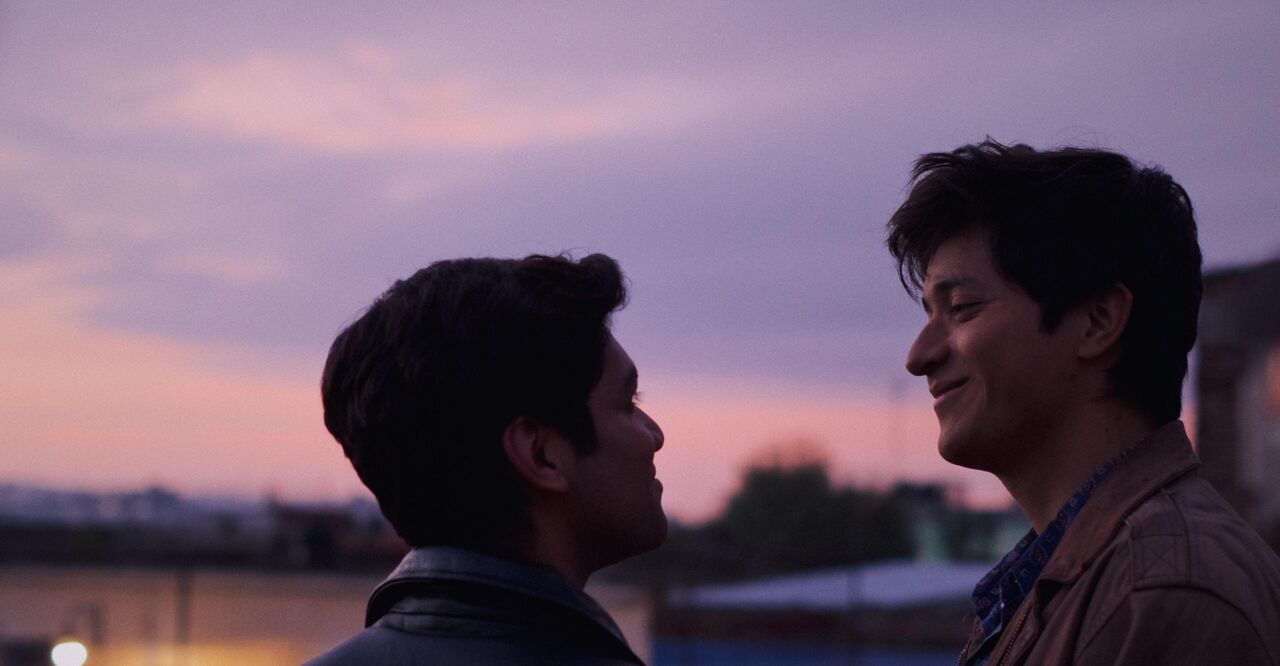 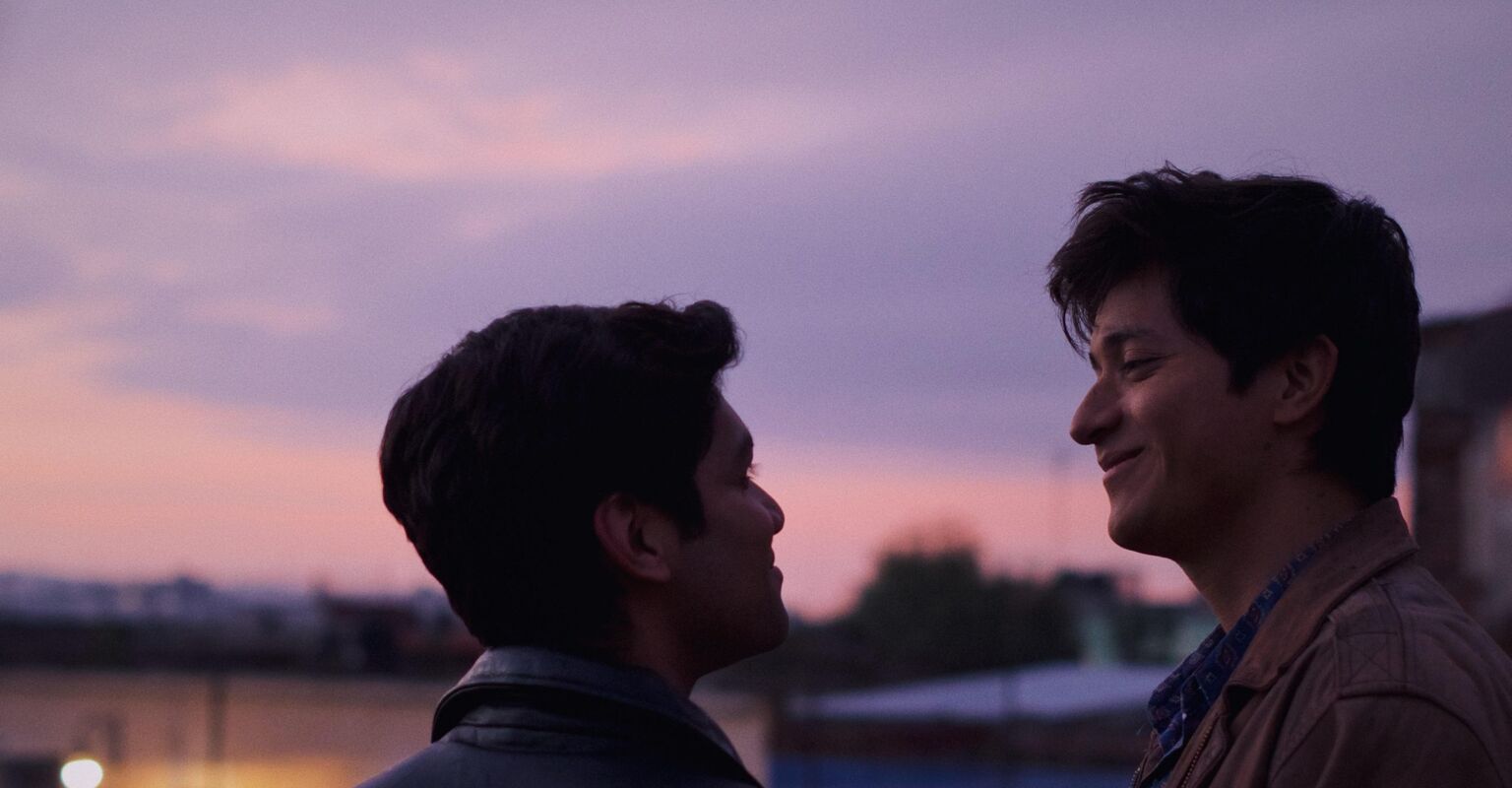 “I Carry You With Me,” the tender queer romance out in limited release this week, tells the love story between two undocumented Mexican immigrants as they cross the border and build a life in New York. The story is based on real people, Iván and Gerardo, who appear in the film to complete telling their story while actors play their younger selves. A wonderful mix of narrative and documentary filmmaking, the film feels particularly resonant to immigrants because it dramatizes the way they always miss their home countries as they are building lives in new foreign lands. INTO spoke with Heidi Ewing, the film’s director, about melding fiction and documentary in I Carry You With Me.

The film starts with a hypnotic sequence as Iván talks about a recurring dream where he sees himself back home in Mexico but wakes up disoriented with a heavy heart far away in New York. I am an immigrant myself and have had that dream many times so I felt an immediate kinship. Why did you start there?

The movie is about how we remember and what we remember from the past. The story was told to me by my friends, Iván and Gerardo. But time has a way of morphing our thoughts and memories. It’s a very elusive thing. And so it was important to anchor the film in the remembering of it all.

We’re talking about a man, Iván, who every single day goes back in time. He replays how he got here and if he did the right thing. If you’re someone who can’t go home, then your destiny is to always remember. It’s a prayer, a ritual. It’s constant nostalgia. And I wanted to crown the movie with a character who’s deeply nostalgic. It’s the immigrant dilemma of trying to hang on to the past while knowing that you’ve changed.

“I Carry You With Me” shows the permanent heartache that immigrants always feel as they’re forging new lives far away from everything and everyone they know. Can you talk about finding that feeling on film?

Armando Espitia who plays Iván has this sadness in the eyes in common with the real Iván. You can project a lot of things on a face like his. We chose a lot of tight shooting, almost claustrophobic on Iván’s face. He shows the pain of what he’s trying to carry along with him. That brought the audience into a more visceral and intimate understanding of the character. We reserved showing the inner thoughts of just that character via voiceover, which speaks to the burden he carries.

You based this story on your friends’ lives. How did you find the right actors to portray them?

I was definitely careful not to go for look-alikes or imitations. I was looking for an essence. Gerardo has a capriciousness and confidence with his culture and sexuality. I saw that in Christian Vázquez. When Amando sent his tape, I knew he was Iván.

I didn’t want the actors to meet the real guys. I knew they had the right thing no matter what they looked like, whatever they did or did not possess.

How did you guide these performances knowing what you know about your friends, the real Iván and Gerardo?

I shoot for emotion first. I was always trying to get the actors to a place where they owned the moment and the emotion. They had the freedom to do with those feelings what they can as professional actors, as talented men.

It was about bringing them viscerally into the moment and keeping them on their toes with improvisation. Not doing too many takes, not calling “cut” too often, and trying to get them to a place where they were actually experiencing it. Coming from documentary filmmaking I’m allergic to falseness and fakery. I was trying to make them forget the process, and be the person.

You mentioned your history as a documentarian: I’ve heard the movie being called a hybrid.

I hate that. It’s a narrative with a twist.

For me, it worked because the choice to show the real Iván and Gerardo was bold. You could have chosen older actors for those scenes and that would’ve been something we’ve seen before. Why did you make that choice?

I came to the conclusion that actors playing them in their 40s would never have the emotion of what I’d captured with the footage I had of Iván and Gerardo. Real scenes shot over many years. I felt it would make for a more visceral experience for the audience. It was scary. Some people won’t like it. Other people will. But I felt this was the best way to tell this story.

It was scary. Some people won’t like it. Other people will. But I felt this was the best way to tell this story.

The flashbacks that show Iván and Gerardo’s tumultuous relationships with their fathers felt truthful and essential to the story. Why was it important to include those?

These are really sensitive topics, especially the scene where Gerardo’s father pulls him out into the field, calls him names, and leaves him there. In real life, how it was told to me, it was much worse. There was a gun involved, a scene which I shot and then took out because it seemed too much.  For the crew, it was heart-wrenching because you’re looking at these vulnerable kids being humiliated and frightened by their fathers. We tried not to make villains out of the fathers. There’s anger, there’s fear but they are confused, scared, and ignorant. They don’t know what they’re looking at, they don’t understand their child. At the end of the day, the men continue to love their fathers and want to somehow get their approval. That doesn’t go away.

They’re essential to the movie because these experiences as children formed them. Gerardo’s response was to be defiant and be out. Iván took it more internally and remained closeted for much longer. The point of those scenes is to show the massive impact an experience like that can have on a gay child.♦

Murtada Elfadl is a culture writer/critic and film programmer. Originally from Khartoum, he’s currently based in New York. His writing has been published at Backstage, The Film Experience, The Film Stage, and Mediaversity Reviews.

Tags: Editor's Pick, Heidi Ewing, I Carry You With Me