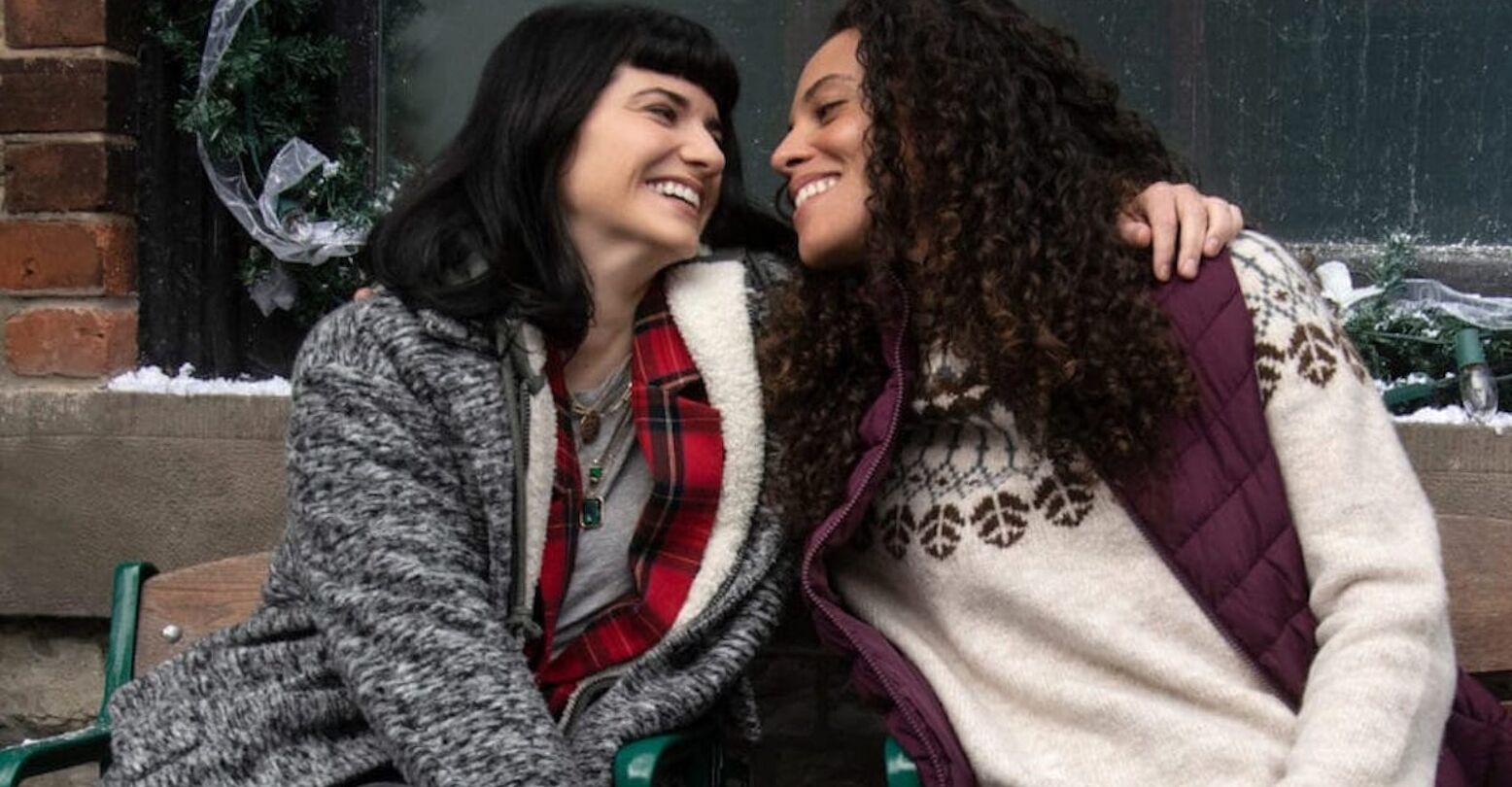 If we were handing out laurels for American cinema’s courageous and forward-thinking depictions of racial, sexual and gender diversity, exactly zero would go to the holiday movie industry. (To be fair, even fewer would go to the Bachelor/Bachelorette franchise). The tsunami of formulaic claptrap that arrives promptly after Thanksgiving from the likes of Hallmark and Lifetime – and more recently from big streaming studios, hungry for a share of the Christmas pie – is so overwhelmingly straight and white that an alien who watched only holiday movies would be as misguided about our demographics as our common occupations (baker, prince, and overworked corporate executive).

But as the tides of culture shift, so too the risk-averse Christmas movie execs must eventually bob along. If 2020 was the true watershed for queer representation in B-list holiday cinema – with Hallmark, Hulu, and Lifetime all proffering up Christmas movies featuring gay romantic leads – then call 2021 an improvement on a theme. This year, more studios got into the fey-la-la spirit, with “Single All the Way” from Netflix, a snappy just-friends-or-more romp starring Michael Urie and Philemon Chambers, and VH1’s “The Bitch Who Stole Christmas,” a bit of promotional Drag Race fluff that still delivers charmingly on holiday camp.

And what about the sad lesbians and their cats, drinking vegan eggnog and hoping for something a bit less dreary than last year’s “Happiest Season,” which dangled a flirtation between Kristen Stewart and Aubrey Plaza, only to foist upon us a grim saga of romantic dysfunction bordering on abuse? This season’s cinematic fare delivered there, too. The year’s biggest-budget lesbian holiday flick, “Under the Christmas Tree,” directed by Lisa Rose Snow and written by Michael J. Murray, was Lifetime’s first foray into the queer women + snow formula. And while no one really deserves a standing ovation for doing the bare minimum in 2021, applause at least is thoroughly in order: where “Happiest Season” missed the mark with its tired in-the-closet plotline and unsettling family dynamics, “Under the Christmas Tree” knew exactly what we wanted. Everyone loves the delusional confection of a winter wonderland holiday movie; it doesn’t take much to make it perfectly queer.

Behold the basics of “Under the Christmas Tree” (the spoiler-averse may choose to stop here): in the WASP enclave of Camden, Maine we find Alma Beltran (Elise Bauman), a hometown gal with a Christmas spirit so fervid and unrelenting she could be a Yankee Candle. Instead, she and her parents run a darling little Christmas goods shoppe (whatever that is) that her great-grandparents started a hundred years ago. The cheery family business is struggling in the era of globalization and digital sales, yet still manages to employ at least thirty full-time Christmas present wrappers. Enter Charlie Freemont (Tattiawna Jones), a riff on the overworked exec, only with a government job (this rings true: lesbians love public service) and a level of Big Top Energy that I never knew I so desperately craved in a holiday movie. Charlie’s got it all: the megawatt smile, the impish but good-hearted assistant (Shawn Ahmed), and a special mission from the governor of Maine, which is what brings her to Camden. For lo, Charlie’s job could only have been conceived by an exhausted team of screenwriters locked in a Lifetime writers’ room and fed a steady diet of candy canes: she is Maine’s official “tree expert” – honed by her youth spent in dad’s tree nursery – a role that requires Charlie to spend her working days (seemingly all of them) in search of the perfect Christmas tree to grace the capitol. The film’s sole conflict, in all its magnificent entirety, arises when Charlie’s perfect tree turns out to be the beloved spruce in Alma’s backyard. From that gossamer thread of cinematic drama unspools a tapestry of sugary holiday movie delights, from evening walks in crunchy snow, to chickens named for classic Christmas movie starlets, and all of it fringed with an endless supply of delicate French patisserie. (The last is courtesy of a cameo by Ricki Lake, who is allegedly fresh off the boat from baking in Paris but can’t pronounce French pastry names to save her life.) You can imagine, dear reader, all that happens next.

From forever until yesterday, the holiday movie was the story of two beautiful and slender white cishets, with great legs and questionable occupations, dashing towards romantic bliss through a series of garlanded hijinks and questionable weather patterns.

The stakes could not be lower. The sidewalk snow could not be whiter. The sheer Christmas of it could not be any Christmas-ier – but that is the raison d’être of holiday movies, after all. To make a holiday movie so essentially a holiday movie, and to make it about queer women, is to say, “You belong here, everywhere, even in our most confectionary corners, where the snow never gets slick and brown and covered in dog piss.”

A cliché holiday movie with lesbian romantic leads isn’t exactly earth-shattering, even if the story smartly sidesteps any pearl-clutching homophobia from the locals, even if one romantic lead is Black and the supporting cast a utopian rainbow of races, the likes of which has surely never been seen anywhere in Maine. One sweetly mediocre holiday movie does not change the world. But just as I am the type of queer who cries (in earnest!) at the end of a cliché holiday movie, so too am I a queer who believes that the banal gestures of inclusion matter as much as the quantum leaps of Supreme Court rulings and LGBTQ+ politicians winning office. They help build the foundation upon which we are constructing a new reality, laying down new stories of what – of who – is possible.

From forever until yesterday, the holiday movie was the story of two beautiful and slender white cishets, with great legs and questionable occupations, dashing towards romantic bliss through a series of garlanded hijinks and questionable weather patterns (why does it only snow on Christmas Day?) Today, two beautiful lesbians achieve the same, a reminder that everyone has the right to fall in love over a box of hand-painted nutcrackers. Tomorrow, what beauties may find each other beneath the silver screen mistletoe? What transmasc princes and poly enby tree experts await us in the glorious new future? They are on their way; with each new improvement on the theme, the holiday movie universe widens, making room for everyone who longs to see themselves onscreen, rolled like cookie dough into the flimsiest of characters and thrust into a plot so formulaic it could be bottle-fed to infants.

I’ll be here on the couch next year, hot toddy in hand, ready to cry when they kiss under softly-falling snow on Christmas Day.