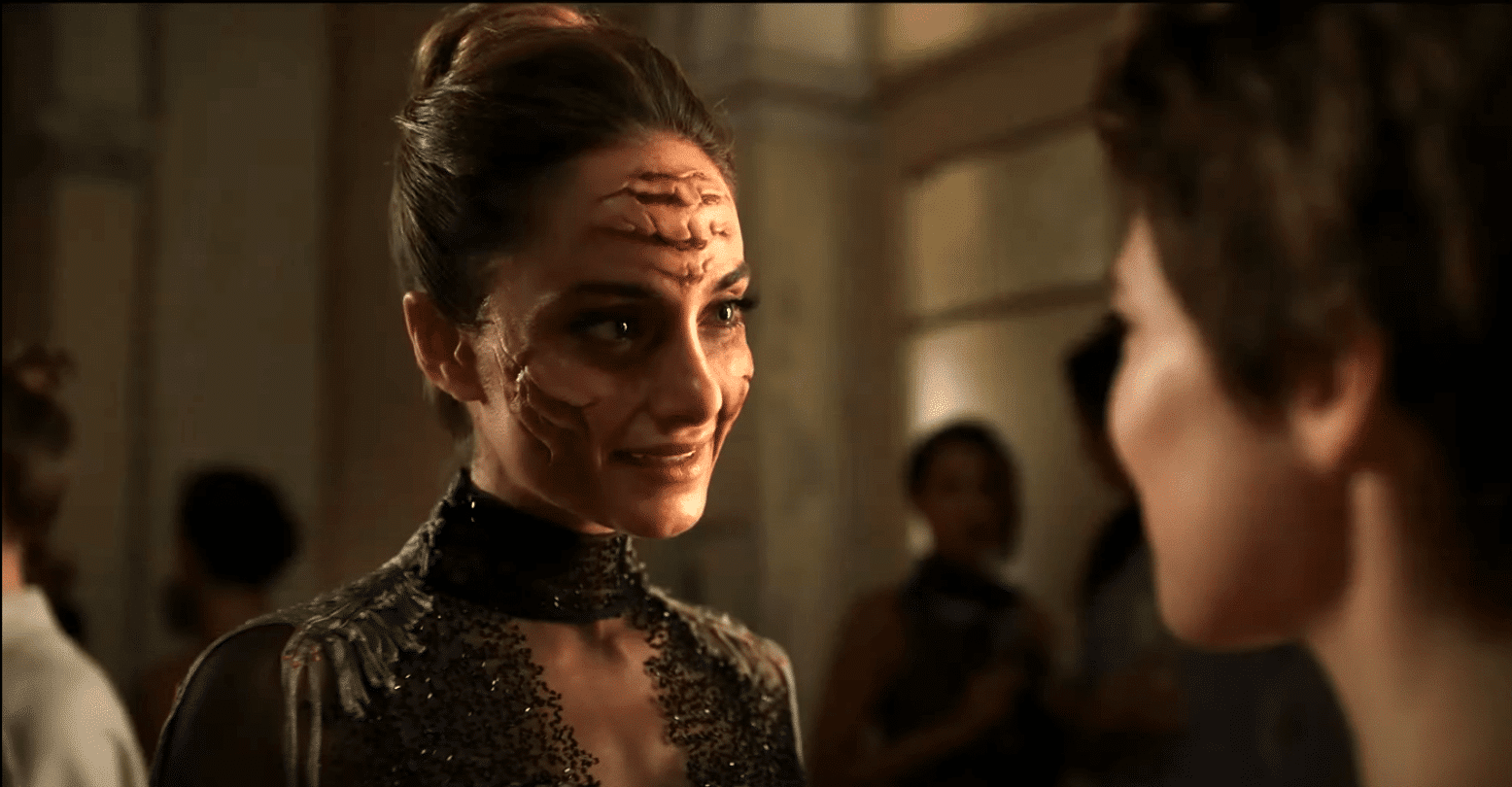 The first thing that happens in Crimes of the Future is the death of a child. More specifically, it is the murder of a child perceived as “different” (i.e. his digestive system has evolved to process plastic instead of food.) It’s his mother who does it, loathing the fact that her child is something she considers inhuman. In typical David Cronenberg fashion, the child’s death is played a number of ways: for horror, as we watched him literally suffocated; for laughs, as Viggo Mortensen’s Saul casually jokes that he wouldn’t have offed his own kid to the murderous mother; and for tragedy, with his death and the way his body is weaponized and policed truly affecting everyone involved.

Bodies are at the core of Crimes of the Future, a film that’s less interested in any concrete narrative and more in musing about the state of the world through a dystopian society and its effects on the human body and mind. Though many consider him a master of body horror, it’s more precise to say that Cronenberg is intimately interested in how the body, for all its beauty and grotesquery, distinctly impacts our mental state. When we are introduced to Saul and his live-in creative and sexual partner Caprice (Léa Seydoux), he is depicted as a man in turmoil, unable to sleep even in the Lifeforce bed meant to “anticipate his pain” and ever-shifting body.

In this future—whenever and wherever it may be—the human body has attained a new state of evolution: many no longer feel pain from injury, surgery has become the new sex, fresh organs are wholesale growing out of nowhere, and body modification is the status quo. In a world where people have forgotten how to feel, the only thing that can be true is what we witness and inflict upon ourselves and each other, as made clear by Saul and Caprice’s performance art screens that boldly declare “BODY IS REALITY.”

To that point, Saul exists in a perpetual state of discomfort. He skulks around in clothing that hides every part of him except his eyes, he constantly finds himself navigating indigestion mid-conversation, and his artistic process seems somewhat stifled in the face of these growing pains (with Caprice even looking elsewhere for new thrills). Those around him see something in him that he doesn’t necessarily see himself, be it his exhaustion and sympathy towards those labeled “subversive” coming across as a sign of potentially dangerous change by some or in his slow embracing of a shifting body being perceived as rather erotic and satisfying by others. For Saul, existing in this body that seems to be perpetually against him is nothing short of exhausting. That, my friends, is because Saul is an egg on the verge of cracking.

Though many consider him a master of body horror, it’s more precise to say that Cronenberg is intimately interested in how the body, for all its beauty and grotesquery, distinctly impacts our mental state.

If you’re trans, you’ve probably called someone an egg. You probably know exactly when your egg cracked. You’ve probably joked about what exactly caused the egg to crack. For many of us, this has come in the form of art, be it The Matrix flipping a switch or practically anything David Cronenberg has offered the world in the realm of both body horror and drama. To call his work distinctly “trans” and attuned to feelings of gender dysphoria may be a stretch for some, but, for many like myself, it is easy to find identification within. Crimes of the Future, to no surprise, is just as rich a trans text as any of his other work.

If you’re trans, you’ve probably called someone an egg. You probably know exactly when your egg cracked. You’ve probably joked about what exactly caused the egg to crack.

It isn’t just Saul that is trans—an egg waiting to be cracked throughout, with the film’s final shot practically screaming “this is what gender euphoria looks like” to anyone watching—but that so much of the film emphasizes just how beautiful transness is. Of course, it doesn’t outright say this in those words, with transness coded in a variety of ways. Some refer to it as “inner beauty” (which someone aptly emphasizes is “not an accident”), others see it as something menacing, referring to those who are even remotely different as “creatures” or as though they are “evolving away from the human path.” Even in an era where body modification has become the norm, those who drift “too far” in order to embrace their identity, and those who allow their body and mind to dictate what needs to be done to it in order to live their lives, are persecuted and treated as outsiders.

In the world of Crimes of the Future, everyone can slice into their own body, whether for individual pleasure or art to be enjoyed by the masses. Some (like Saul and Caprice) are sincere in their artistry, genuinely attempting to explore what it means to exist in a body and rebel against it, while others are hacks who simply exist to attempt provocation (as the film aptly critiques through the artist “Ear Man”, a dancer with a bunch of useless ears surgically attached throughout his body). But, as in our own society, there are rules and limitations to what can be done with the body and there are forces out there attempting to control them.

“Even in an era where body modification has become the norm, those who drift “too far” in order to embrace their identity…are persecuted and treated as outsiders.”

The film’s brand of oppressor comes in the form of the New Vice Unit, a shady fresh police force that actively seeks to patrol and destroy those who take body modification too far—in this case, those whose bodies have evolved to process plastic instead of food. These purple bars are something that “normal” humans reject and those who have evolved beyond the limitations of their given body (or surgically adapted it themselves) need to survive. Hell, a character weeping with joy at first taking it is maybe the most blatant metaphor for HRT I’ve seen since The Matrix’s pills, but I digress.

The New Vice Unit seems to have their tendrils everywhere, much like our government itself and those who enforce outdated and monstrous policies seem to. They have people in the office that registers new organs keeping an eye on things, they have people working for the corporations that create things meant to improve our lives, and they have even managed to manipulate those who are queer, those who may very well be trans themselves but not know it yet, into doing their dirty work. Their very existence seems to be designed not only to control bodies, but to ensure that the bodies of those who have died are not used politically or in a manner that would incite a revolution.

With Crimes, Cronenberg constantly seems to be critiquing and poking fun at those with the power to dictate what bodies should be and what people should be allowed to do with them (going beyond transness and into insightful discourses about everything from climate change and the pandemic itself to abortion and disability rights.) He doesn’t let anyone quite out of his crosshairs, even outright showing that those who are perceived as different are often seduced by the allure of normalcy. That this film comes out as human bodies are under attack is no coincidence, with its every fiber feeling connected to the contemporary political landscape.

With Crimes, Cronenberg constantly seems to be critiquing and poking fun at those with the power to dictate what bodies should be and what people should be allowed to do with them.

The New Vice Unit and National Organ Register aren’t far off of how people with uteruses are kept under watch and forced to adhere to the standards they decide. The outright murder of anyone who is different and the lack of interest in protecting those bodies or holding anyone accountable for their deaths is uncomfortably timely. And the child, the one whose murder sets off this entire chain of events, feels distinctly tied to the way trans kids are being persecuted by everyone around them, including, for many, their own families.

For all the fun there is to be had in Crimes of the Future—in joking about how Saul is an egg, Caprice is a supportive cis girlfriend, and Timlin (exquisitely played by Kristen Stewart) is a chaser—there’s also a dense text to be explored when it comes to how it presents and dissects the very meaning of identity and what exactly a body is for. It presents a world where the body can be transformed any which way, where people are praised for modifications that are deemed aesthetically pleasing, where unimaginative surgeons profit off of exploiting those who need their body changed, and where people are harassed and killed for simply trying to exist.

The film presents a bleak world, one so full of absurdity that it’s impossible not to laugh in the face of tragedy. The best thing about it, or maybe the worst if you think about it too long, is that Cronenberg is just reflecting our own world right back at us. But at least, in his eyes, there’s beauty in the breakdown, and that’s gotta count for something.♦