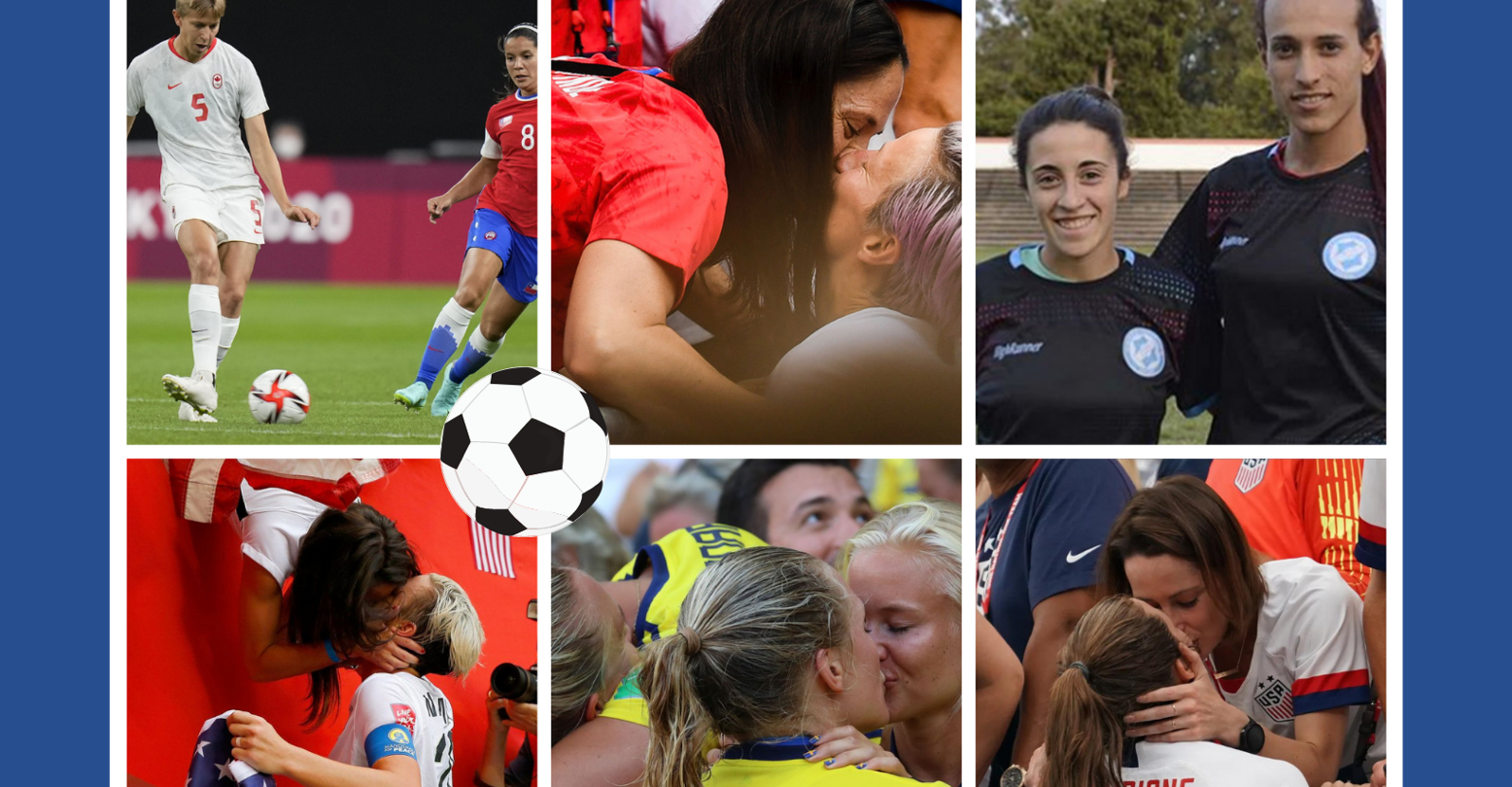 On a muggy afternoon last month at Kashima stadium in Japan, the U.S. women’s soccer team – grittily determined to claim the bronze after losing its chance at gold or silver – pulled past Australia in a 4-3 win. The final whistle was met with muted enthusiasm all around; it wasn’t the medal the Americans had hoped for, and the Australians had just, well, lost. As the teams wandered off the pitch, the cameras panned aimlessly, and it seemed time to turn off the TV – but wait! Was that American midfielder Kristie Mewis consoling Aussie forward Sam Kerr…with her lips?!!?

It was. A timeline of convincing evidence was quickly assembled, queer curiosity piqued the world over – and the internet soon confirmed with an Instagram post from Kerr, who let us know, by way of Mewis’ face on her face, that love has no national team, and desire no offsides. “You can add another Olympic medal winner for Team LGBTQ+!” Out magazine crowed after their announcement, which is somehow both exactly the kind of hearty line my uncle would use in a family group chat AND a team I’d pay handsomely to see march in the next opening ceremony (floor-length sports-capes by Jonathan Van Ness? Just a thought).

For all the strife and uncertainty of the Tokyo 2020 Olympics, Team LGBTQ+ had a great run. There were more out athletes competing than ever before, and the games welcomed the first three openly trans and non-binary competitors. And though fans of the ultra-gay USWNT (also known as Megan Rapinoe & Friends) were disappointed by the third-place finish, that diminished performance made room in the limelight for other teams to shine, and for all of us to gape at the astonishing fitness & hotness of queer soccer players from across the lands.

For all the strife and uncertainty of the Tokyo 2020 Olympics, Team LGBTQ+ had a great run.

First among them, royal Mountie of our hearts, the mononymous Quinn of Canada, who made history thrice: as one of the Olympics’ first openly trans athletes, the first to medal, and the first to claim gold, in the final against Sweden. Quinn! They made us all proud, with their feisty midfielder feet on the pitch and their cheerful topless photos on Instagram. Those faint pink chest scars, rippling in the sunlight, were a quiet flare of possibility: you can be trans and a soccer star. You can stand on the gold-medal podium with a single name, a new kind of pronoun, and sing your heart out to your national anthem. Trans athletes, that moment shouted, you belong here.

I loved Canada so much that day, even more than the day I discovered poutine, or the day I first heard Jagged Little Pill. I loved Canadian coach Bev Priestman, herself an out lesbian, who showed up to every game in a suit so stylish you’d have thought she’d wandered over after tapas with her wife. Which, in all likelihood, she had, as lesbians are famously good at time-management (myself not included, which is why you’re reading this Olympics recap a month late). I loved keeper Stephanie Labbé, who saved the game for Canada in a sphincter-clinching, 3-2 penalty shoot-out. I’m not sure whether Labbé’s mind-games worked to psych out the Swedes – there was a lot of smirking and strutting about – but they definitely psyched me up enough to google “Stephanie Labbé gay,” whereupon I learned that she, too, is a fellow queer!

These days, the Swedish women’s team rolls deep in queers, and it won’t be long before they get to kiss their queer partners with gold medals slung around their necks.

And while queers won, of course, queers lost as well: Labbé’s fine performance robbed the legendary lesbian Swedish midfielder Caroline Seger of what could have been her team’s first Olympic gold medal. After the game, amidst the Canadian revelry, Seger sat on the turf and wept quietly, head down, her Scandinavian-blonde bun pointed toward the sky. I felt sad for her, wanting all good queers to win. Alas, this is professional soccer, not an evening of improvisational dance, and with the growing representation of queer athletes comes growing opportunities for them to crush each other’s dreams. As a decorated athlete and long-time LGBTQ+ advocate, Seger’s legacy is rock-solid. These days, the Swedish women’s team rolls deep in queers, and it won’t be long before they get to kiss their queer partners with gold medals slung around their necks.

The kissing of the queer partners! This is like the running of the bulls for fans of women’s soccer, only safer and with less animal cruelty. For all the thrills of the actual games, it’s those quiet moments of public intimacy that make my heart leap the highest. They signal, in their casual unceremoniousness, just how far we’ve come. When tennis star Martina Navratilova was outed by the press in the early 1980s, advertisers wouldn’t go anywhere near her. “It was the kiss of death,” she told Masha Gessen in a 2019 New Yorker article (Subaru, famously, was one of her only sponsors, a classic piece of lesbian vehicular lore that was later incorporated into Dana Fairbanks’ storyline on The L Word). Even Abby Wambach – a lesbian so wondrous that she got the world’s most famous Christian mommy blogger to switch teams – was on the national team for 12 years before publicly coming out. Her post-victory kiss, with then-wife Sarah Huffman after the 2015 World Cup, belongs in The Kissing of the Queer Partners Hall of Fame. So too does Kelley O’Hara’s 2019 post-win kiss with her girlfriend, which was also her coming-out moment, and thus the most understated “Yep, I’m gay” of human history. As, of course, does Pinoe’s championship kiss with basketball star Sue Bird, which launched our love affair with the world’s sportiest sportsbians (the legendary, queer U.S. women’s basketball team deserves their own ecstatic article, but I’ll leave that honor to someone who understands jump balls and buzzer-beaters).

The kissing of the queer partners is like the running of the bulls for fans of women’s soccer, only safer and with less animal cruelty

And beyond pitch-side kisses, there are so many more queer soccer players serving up pride in their regular lives: Marta da Silva, the Brazilian star; U.S. keeper Adrianna Franch, whose peak-gay engagement photos included umbrellas; Fernanda Pinilla of Chile, a country still battling over gay marriage…the list goes on and on, so long that Autostraddle did us the favor of compiling all 42 queer soccer players in the women’s tournament (bless them). That British forward? Gay! Swedish keeper? Her too! (Lesbian keepers is a no-brainer. The hands! I have such a thing for keepers I’ve even convinced one to marry me. And yep, she’s also gay!). We haven’t even talked about lesbian royalty Ashlyn Harris and Ali Krieger, who stayed home from Tokyo to hang with their new baby, Sloane, who must have more queer aunties (and more infant-sized couture) than any child ever.

No doubt, there are many, many more queer and trans soccer players, training and playing in places where being out is still a professional liability, if not far worse. But every soccer player who comes out, whether in a quiet post-match kiss or a euphoric social media post, lays down another paver in the road towards full LGBTQ+ inclusion. This is especially true for athletes outside the Anglo/Nordic regions, players from countries where women’s soccer has yet to be fully embraced, let alone queer soccer players. But no matter where they begin, whether they’re chasing balls over fresh-cut grass or back-alley dirt, a new generation of young soccer fans has an ever-expanding roster of queer and trans professional players to look up to and believe in.