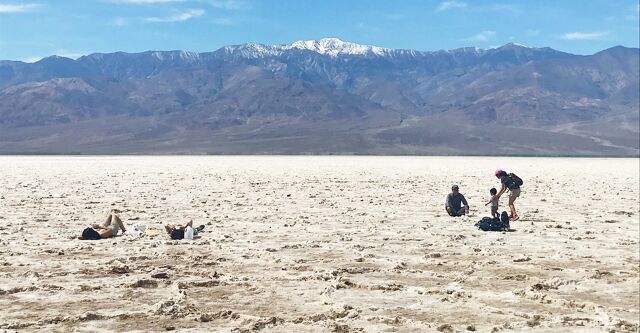 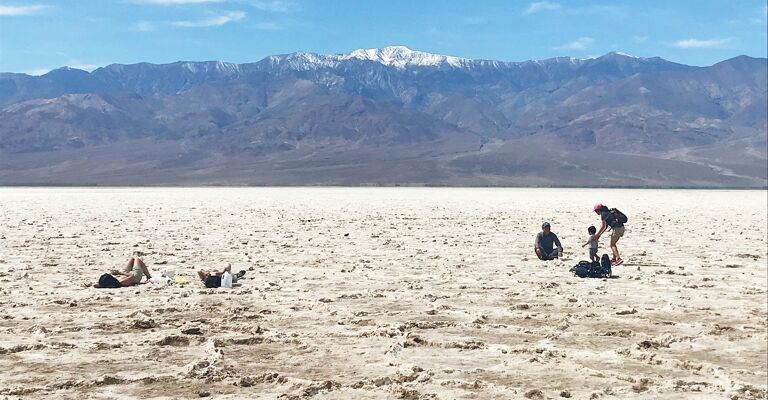 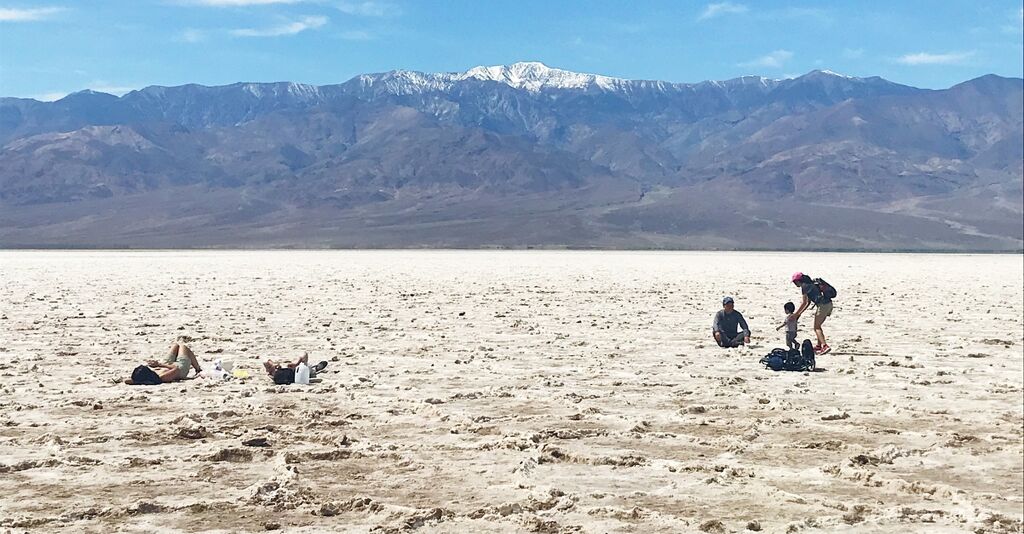 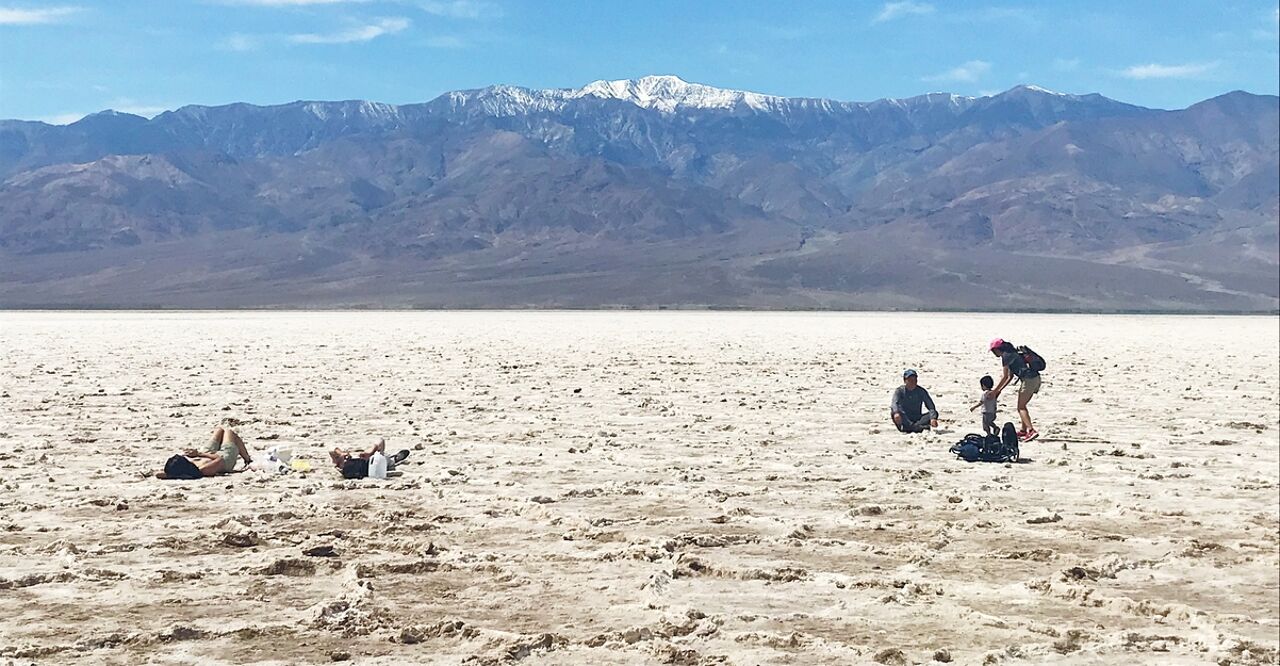 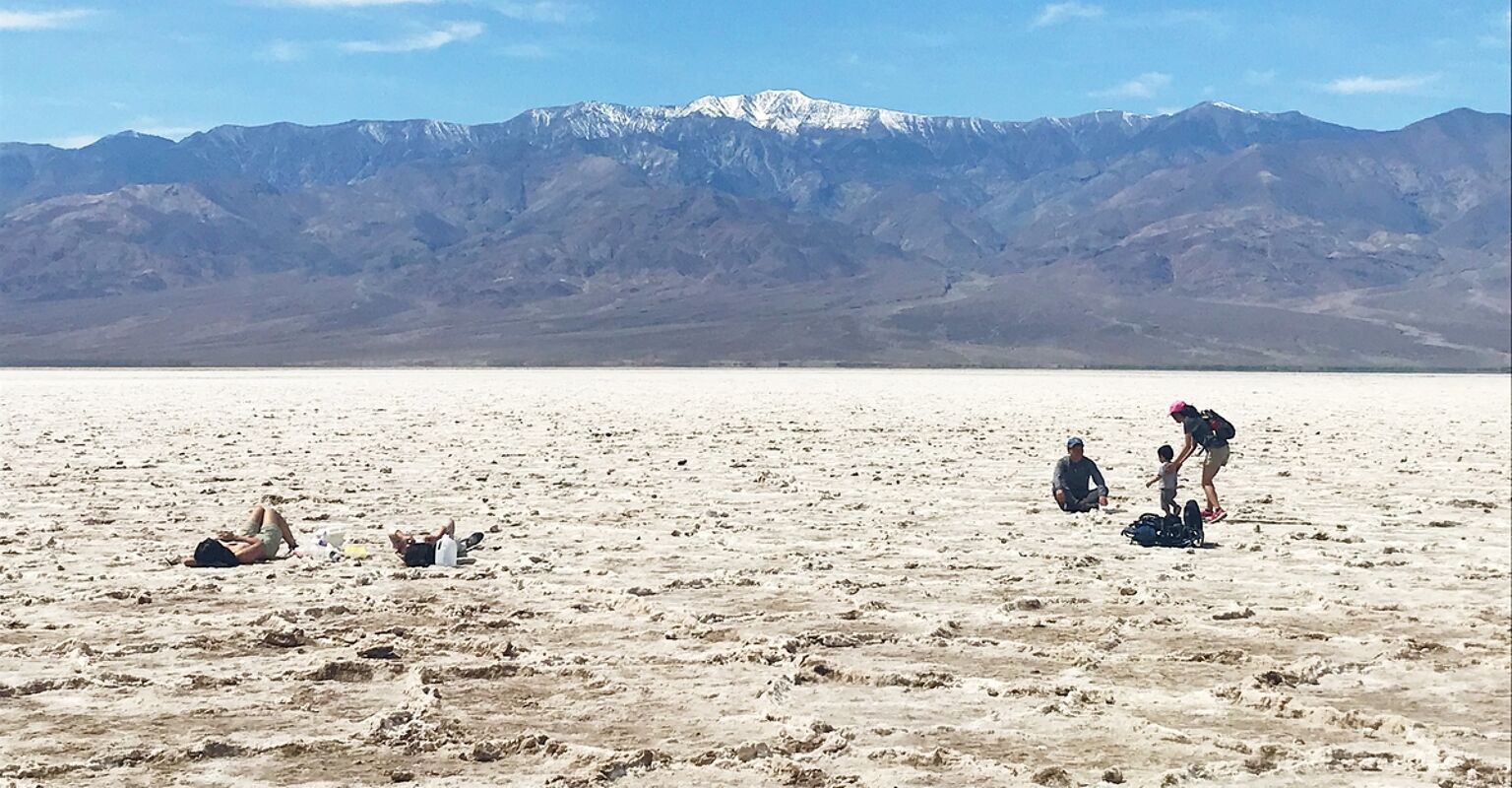 In California’s Death Valley National Park, you can find over 300 bird species, 51 different kinds of mammals, 36 classifications of reptiles, 6 species of fish, 5 kinds of amphibians, and over 1,000 plant species. While all of these give me life, two species specifically stood out on a recent five day trip to the lower 48’s largest and most desolate national park: the Canyon bat who dive bombs over mythical dunes and the Bristlecone pine, which roots itself resiliently on the park’s highest peak, Telescope, nearly two miles high.

In this first section of a two part series on Death Valley we will journey to find the nocturnal Canyon bat while part II will perignate to the top of the Telescope Peak to accentuate the ancient Bristlecone pine. These two magnificent beings survive against all odds in some of the most extreme terrain in the world and so, they are give us more life than any death drop, workroom entry, or savage read could ever germinate.

The lowest point in North America sinks 282 feet below sea level. It is the internationally known Badwater Basin. One of the hottest places on earth. At one time 128,000+ years ago, the valley floor was a gorgeous pluvial lake called Manly filled turquoise by the melting of Tahoe glaciers. Now, it is a seemingly clearly defined graben of geometric salt crystals bookended and sunk between two enormous mountain ranges: the Panamints and the Armagosas.

As I sauntered to the heart of the low point in midday sun, I walked among the highest concentration of visitors I had encountered in my four days in the park. They were many and varied families, couples, lonesome wanderers. German, Chinese, French, Portuguese, Korean, and Spanish were just a sampling of languages I caught in the razzle of desert shimmers. Some of the visitors covered every square inch of their body in Columbia Sportswear, floppy hats, gloves and as heterosexual-as-it-gets zip-off cargo pants. 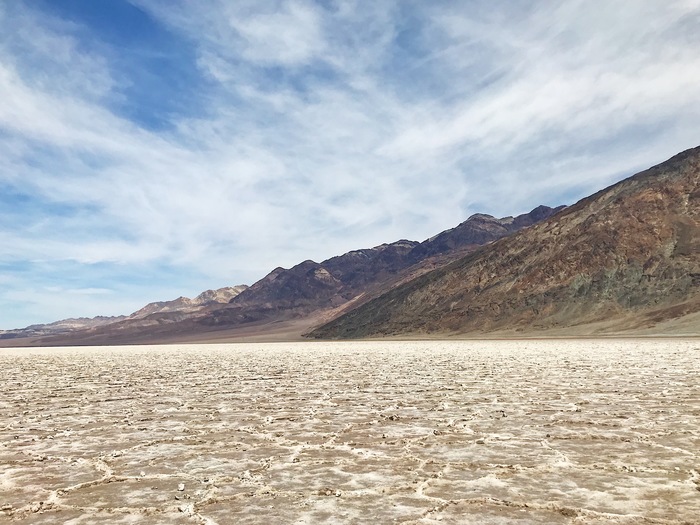 Others strolled by nearly nude as if they were sashaying on the playa of Burning Man, like the fivesome of lobster red bros in short shorts and bandanas apprehensive to lather each others backs; or like the two women tanning topless in the distance. There was a even a grandmother in a brassiere holding hands with her bare chested beau. This is a one of the unique features of Death Valley over chillier national parks-the craze of the heat and wildness of the surroundings lessens societal conservativeness into gratuitous instances of unintentional exhibitionism.
Whatever we did or didn’t wear, all of us walked on the same wide path trampled by hundreds of thousands of yearly visitors to an aimless destination; the end of an established footpath. Hoards of visitors walk this half mile jaunt daily just to experience the parched grandiosity of the the basin. 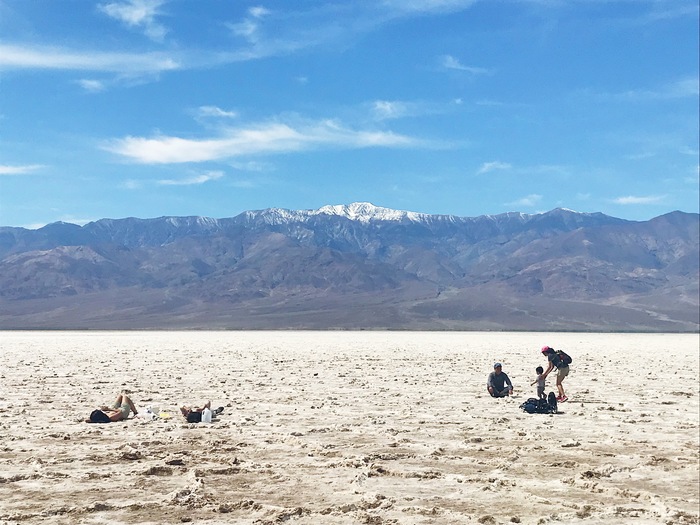 Somewhere on my way back to the busy parking lot, I came across a park ranger decorated in unmistakable garb: boots, green pants, a slate grey shirt worn marked by a proud badge, and the quintessential banded hat.

For a family of four, she patiently answered questions in the sweltering sun. I stood by, listening, taking photos of the valley yawning before us. She proudly declared the highest recorded temperature ever happened in the park: 134 degrees fahrenheit at Furnace Creek, in 1913. She informed the family of the park’s size: the sixth largest national park in America, and the biggest in the lower 48.

It is here she grinned the widest and professed her love affair with the park through her knowledge. To paraphrase from her conversation, the most remarkable thing about the park, at least to her, was its size: over 3 million acres of federally designated wilderness. The possibilities were endless, she gushed. Slot canyons, mountain peaks, sand dunes, dried out lake beds, four wheel drive tracks, moving rocks, and ghost towns. I smiled. I too shared her excitement for such boundless promise. For the moment I drove into the park I knew I would need ten prolific lives to explore it all. 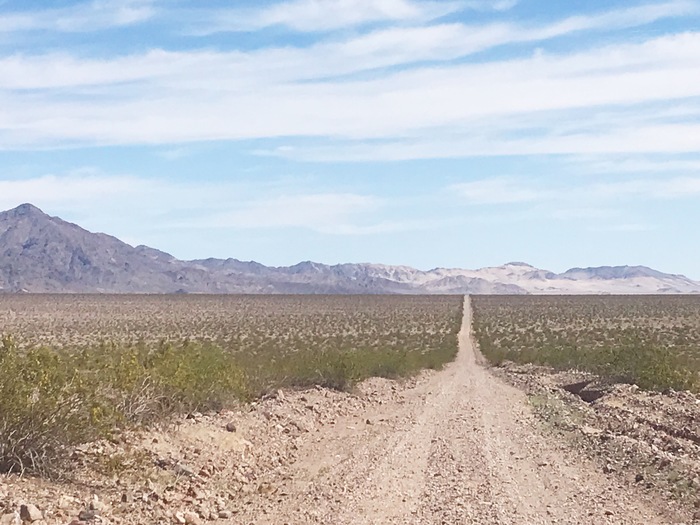 And so as I left for my car, I decided to see one of these little far away pockets for myself. I wanted to rush further into the heart of the 91% of absolute wilderness the ranger rhapsodized about, and so I skirted around the wide alluvial fans that stretched into the valley floor like webbed fingers. I went south on Badwater Road until it thinned and buckled and became Harry Wade Road, a remote and unpaved road that washboarded for hours into a seemingly mythological landscape.

There are many dunefields in Death Valley. The most accessible are the Mesquite Flat Dunes that stretch in the center by the historic outpost of Stovepipe Wells. Then there are the Eureka Dunes which erupt to nearly 700 feet high, the second tallest dunes in North America (50 feet shy of Colorado’s Great Sand Dunes.) But there are always lesser visited dunes like Hidden Sands, Buckwheat, Saline Vly, Panamint, and Ibex.

For two and a half hours I kicked up the dust on Harry Wade Road. I passed the circular and mysterious Owlshead Mountains, the proud Confidence Hills, and the calico spotted Black Mountains as the single dirt road wove over sandy flats and over the bed of the dry Amargosa river. On this road, I remember thinking this is a landscape not of Americait felt Namibian, Algerianstunningly desolate except for the well spaced armies of greasewood and the signatures doodled in the sand by kangaroo rats, roadrunners, sidewinders, and kit fox. 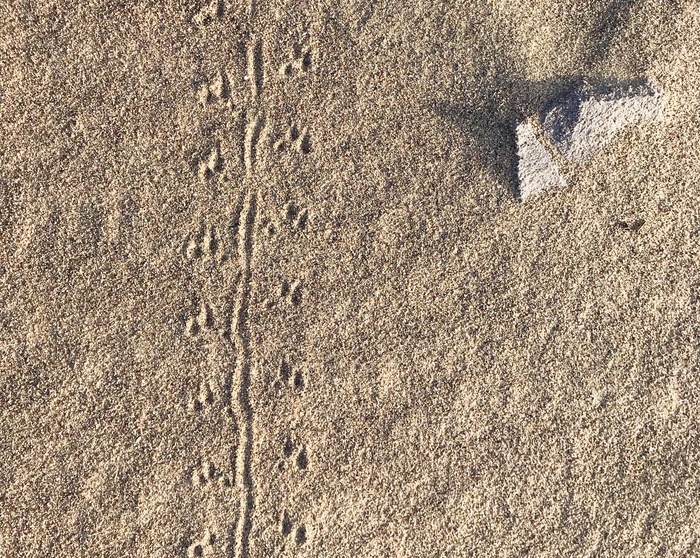 As I rounded a outcrop of the Black Mountains, suddenly all of that sand that I had driven over the past few hours seemed to assemble itself into dunes in the nook of a little valley, a deep horseshoe of the range. In the distance and late afternoon sun, the dunes appeared like a mirage, shimmering and glimmering, nonsensical, and mythical. I took the road to Saratoga Springs, one of the only watering holes in the park, parked as close to the dunes as possible, and set up camp at a primitive site just off the road surrounded by more greasewood. Then, I pitched my tent, lathered on more sunscreen, checked my water and was off to explore the dunes in the golden hours of the day.

It was sweaty mile from campsite to dunes. But when I approached the dunes that spilled into the rocky arroyos, I took off my shoes and felt the warm sand on my toes. As I began to ascend the mountains of sand, I looked down to the basin and confirmed what I suspected: there was not another human in the valley. 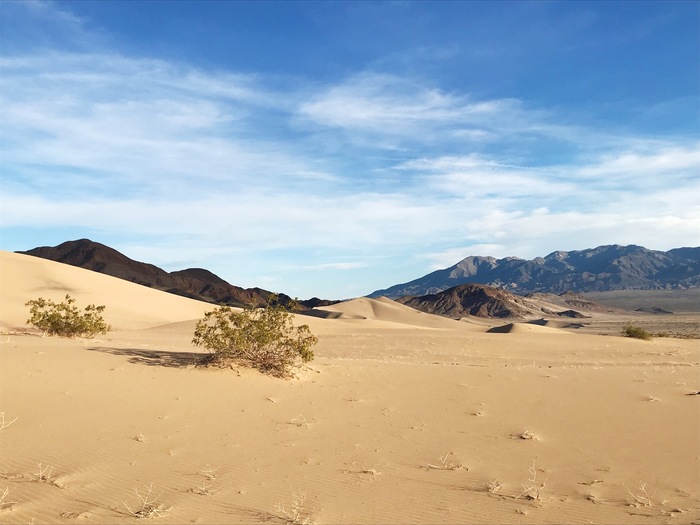 When climbing dunes, it is easiest to follow ridges and spines. The steep faces and flanks are sensational to run down (always accompanied by a joyful yeehaw!) but in climbing, the ridges are quickest. As I ascended, I picked my target summit, the tallest of all of the dunes and not long after a sequence of wheezes and tremendous glute burn, I took the summit and sunk into the sand before calculating the time before the sunset’s great show. This would be a stunner, a sunset intensified by the wisps of cirrus clouds to the west.

I scouted from my dune perch until the grand show of pinks and periwinkles began, happy with my handsome vista. I had the entire view of the horseshoe basin before me dotted with greasewoods, I had a smaller set of dunes in the foreground to the south with the dramatic Avawatz Mountains in the backdrop, as well as the Black Mountains behind me, turning pinker than petunias by the second. And then, I began to hear a pitter patter. 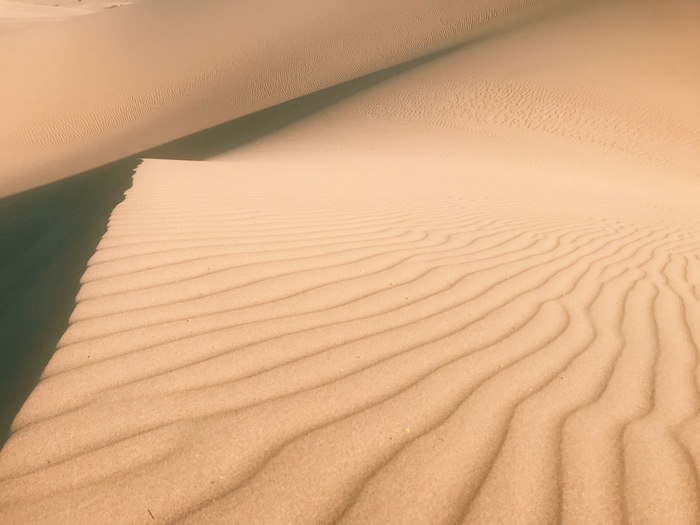 At first, I assumed a charming evening chorus of birds feeding at dusk. Afterall, there were owls in the Black Mountains already hooting. Long eared? Barn? Great horned? Western screech? I wasn’t sure. We as humans are used to birds, but as I inspected the swooping, dive bombers closely (and as a few of them inspected me, swishing by my face) it became clear that these were not birds at all, these were flying little mammals. These were bats. Bats feeding at dusk on the precipice of the dune’s divide in the rose wash of a softening sunset. This was a poem begging to be written.

After the trip, I talked with a professor of comparative physiology and physiological ecology at Humboldt State University, Joseph M Szewczak, who specializes in bats. Szewczak has published many studies on various species of bats in the Inyo-White Mountains, a towering range just to the west of Death Valley and seemed the obvious choice of bat expert to help me identify the species. 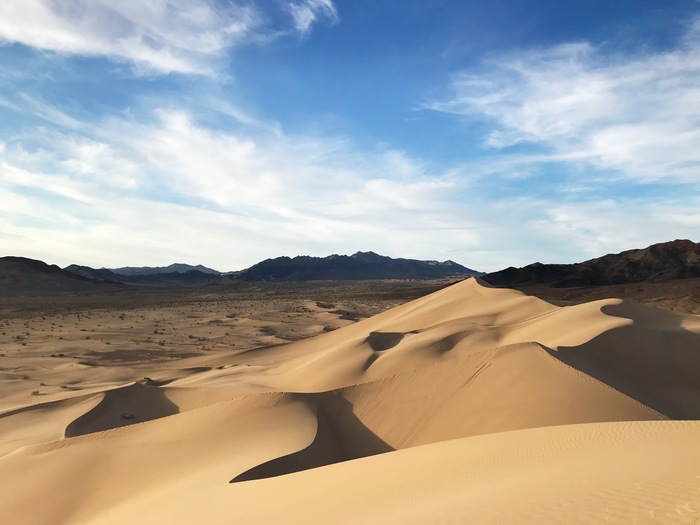 He tells me there are up to 17 different species of bats to be found in the Death Valley, but that most likely (from a video of the happenstance I sent him) said that “the Canyon bat (Parastrellus hesperus) would most likely emerge early and make themselves visible to you in early twilight like these.” He also said of the bats, “as the smallest North American bat they only weigh a few grams, between a penny and nickel, have all the same parts as you in that tiny package, and may live for ten to twenty years.”

It has always been true that the wildest things come out after sundown and fill our world with great performance. As the pink of the sky slowly conceded, the bats, once in a wild frenzy of airborne reconnaissance gradually slowed and thinned out, pitter pattering across the night as a nearly full moon and nearly cloudless night lit up the dunes in ghostly glow. It was a windless night, delightfully warm, full of the bats’ moonshadows as they left the dunes for more insectivorous locals. 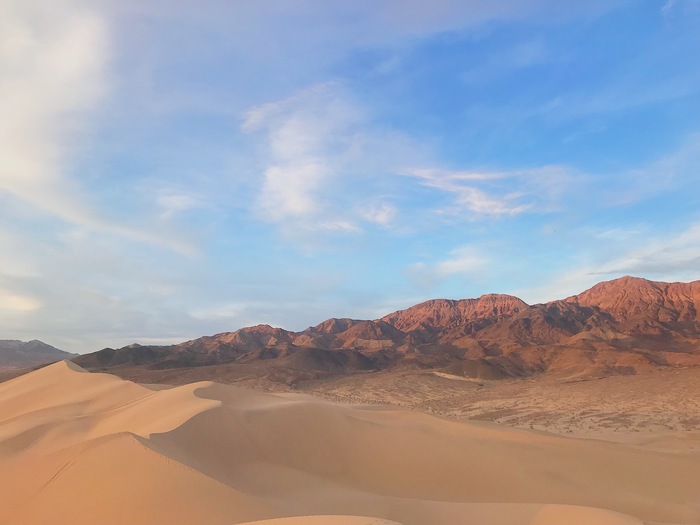 Happy on the sandy summit, warmed by the desert hush, and mesmerized by landscape embellishing before me, I decided there was no need to hike all the way to camp. And so out of sand, I made a little pillow and softened it with a fleece before I was lulled to sleep by the fading pitter-patter of bats, by the sand dunes, singing their nightly tunes.