With growing worry of gold mining and concrete manufacturing businesses, President Herbert Hoover designated the Great Sand Dunes a National Monument in 1932. In 2004, the park was officially designated National Park status by Congress and expanded its reserve to protect the water rights of the entire drainage. 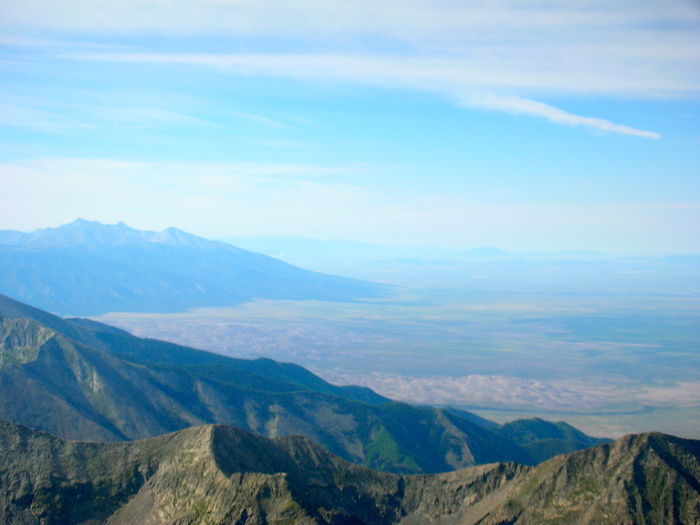 I was cresting Star Dune, the tallest dune in Colorado’s Great Sand Dunes National Park and Preserve. A few steps ahead of me on the summit, my cousin and her girlfriend stared out at thirty square miles of sandlike something out of National Geographic cover shot of Namibia or Libyabut these dunes are made in North America by 14,000 foot Rocky Mountains that enclose them like a possessive lover.

The tops of the peaks are frosty, white, and windblown, but as the eye sizes them up from head to toe, it sees a treeline sparse with bristlecones that become fir and spruce that cover the decolletages and rocky abdominals of the peaks in a thick shag carpet of evergreen. And at the bottom, the junipers and piñons lay their claim on the thighs, knees, and toes of the range. Each tree is separated from its neighbor like polka dots decorating the alluvial fans of such blockbuster orogeny.

Imagine a valley the size of Connecticut. But, flatter than hell and raised some 7,500 feet and covered in woody bushes like greasewood and rabbitbrush. This is the San Luis Valley of south central Colorado where the dunes were formed. To the East we have the thin, steep, and still rising Sangre De Cristo Mountains translated as “the blood of Christ” (named for their scarlet alpenglow) and to the West, the colossal expanse of Colorado’s southwestern montane: the San Juans, where unverified reports say grizzly bears still linger among the volcanic remnants of the remote Weminuche Wilderness.

In such a flat, dry valley, you can imagine the nuisance of sand sedimented from past glaciers grinding down rock and spitting them into the valley in colossal flash floods. Lakes formed, were drained by time, and dried out. So if you stand in the middle of the San Luis Valley on a windy day, you can feel the winds whip little particles that sandpaper your skin raw. The winds’ patterned direction to a pocket below the Sangres and contrasting, spiral gales (companioned with hundreds of thousands of years) give us a simplified understanding of the Dune’s 69-story ascension toward the Colorado sky. 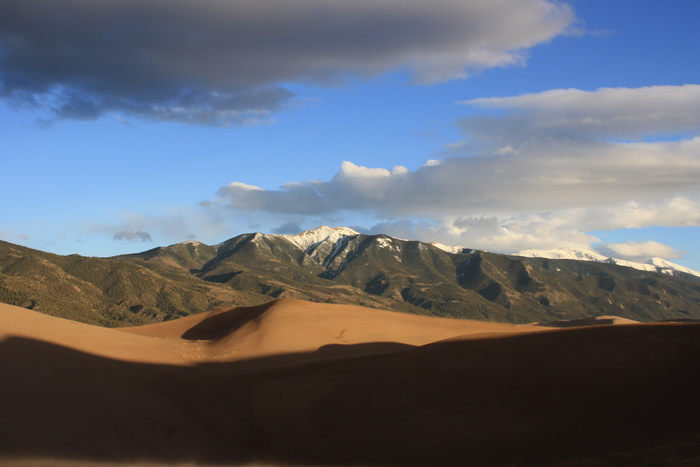 Earlier that day, the three of us bypassed the southern Front Range from Colorado Springs, over La Veta pass and skirted our way around Blanca Peak, known historically as Sisnaajini, one of the four sacred mountains of the Navajo Nation. As the dunes came into sight, they introduced themselves as a pale dot below the blue of mighty mountains but transformed into high definition waves of sand, set perpetually in slow motion as we arrived at their feet. At the visitor center, we packed our camping gear into our backpacks before grabbing our backcountry permit from a friendly, mustached ranger.

The purpose of the trip, like most National Park tours, was for more immersion into our country’s most coveted landscapes for seemingly extraterrestrial experiences. To ascend wild dune-scapes, watch Orion and Ursa Major fight in the sky without light pollution, and play in the biggest sandbox in North America. The second objective was to capture the dunesa photographer’s dream in the celestial lighting it gifts its guests on evenings when all the conditions align.

It was my ninth trip to the dunes and I had yet to capture the landscape satisfactorily with my camera. I had forgotten cameras on past trips, been unlucky with dead batteries, frozen phones, ghostly overcast weather, or been photobombed by unsuspecting visitors in oversized safari shirts and bucket hats.

But for this trip, we were prepared with the big guns: a nice DSLR camera and total solitude. You see, in good lighting the dunes can make even the most novice point and shoot photographer look accomplished. It’s like photographing a talented top model. Or a fishy drag starlet resting on pretty. For any photo will produce favorable results with a subject who knows their angles and grace. But to do the dunes their truest justice, optimum lighting, cloud cover, visibility, and weather must come together at once. 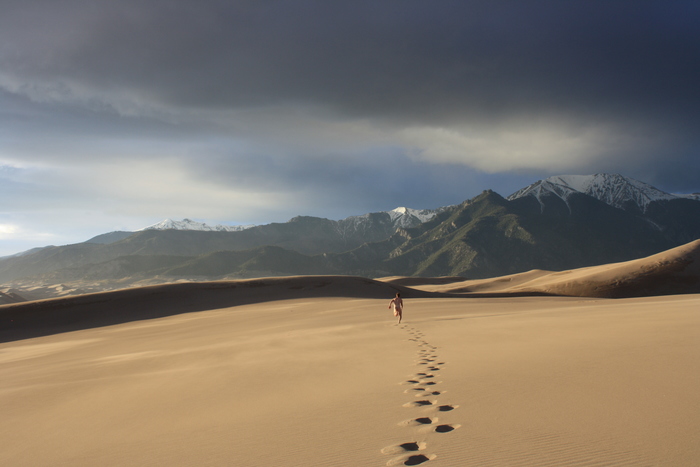 At the top of the 750-foot dune, my cousin determined the direction of our camp. She picked an interesting depression half a mile away that appears to be protected from the fierce westerlies. As her girlfriend joyfully hopped down the dunes like a sprite, her backpack bounced up and down and the sand cushioned her every leap, burying and surrounding her feet. Below the top surface, the sand was moist and smelled of melted snow. We joined her down the steep northern face of the dune yowling “yee-haws!” and “yahoos!” as we caused mini sand avalanches. We couldn’t see another human in the dune fields and we decide that we are no longer in Colorado for we had become Saharan wanderers.

Childhood playfully sprinted back as I remembered my first visits to the national park where I climbed, dove, and rolled down the dunes after body surfing Medano Creek, a large snowmelt-fed creek that guards the dunes on their eastern and southern flanks. The creek is one of the few places in the world that experiences “surge flow” causing, at times, easy rolling foot-high waves. Wet and sandy, as kids, my sister and I swam those ice cold waters and made sand castles in the American West, in the commencement of summer.

After sliding, falling, and lodging sand in unfavorable places, the three of us looked back at the face and saw the remnants of our descent in neat straight trails of impact prints but they were already being tidied by the winds, erasing our distance. Wind pelted us with more tiny particles and as we spit those tasteless grains out as we followed the sharp spine of a dune to our oasis.

Away from the strong winds, we pitched our tent and laid our packs inside. We suntanned with the happy lizards on a sea-less beach and daydreamed the afternoon away. 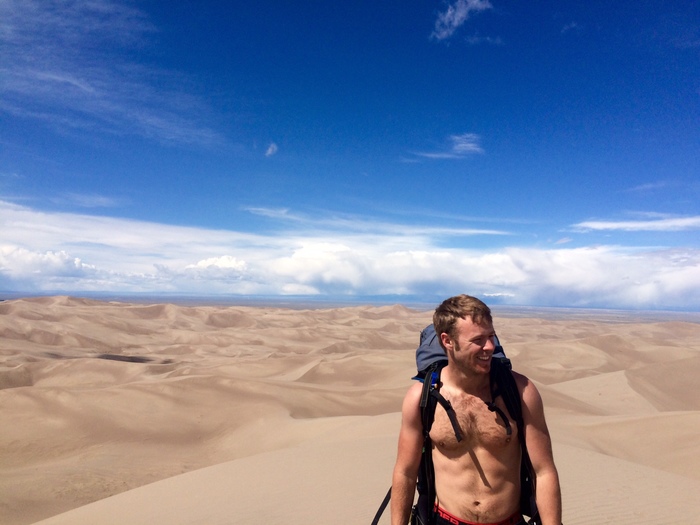 Daily temperature differentials of the Colorado mountains are infamously unfathomable. I have backpacked the dunes on three separate occasions and each time, summer, fall, or spring- I am surprised by the rapid change.

The afternoon brought the three of us heat that warranted bare-chestedness and sports bras, but as the sun was shrouded by late afternoon clouds, we shivered and put frigid hands into woolen mitts. And as we did, we worried that the brewing, dark purple clouds would block our opportunity to photograph the dunes in their famous sunset show, and were terrified that they would assail us with brutal hail. But still, we climbed from the windless oasis of our camp, up a steep dune that burned our glutes, calves, and quads, but warmed our bodies and quickened our breath, to the summit of an untouched dune escarpment.

We blocked the cold winds by huddling close to each other as we waited for the sun. The sky continued to threaten rain, hail, sleet, and perhaps even snow as the clouds were the type of purple that linger beside complete blackness. They were the type of purple that threw lightning bolts far off into the distance over the expanse of the San Luis Valley. And to be frank and rather crass, they were the eggplant emoji kind of purple and we were worried the droplets of water emoji would soon be coming. With dusk approaching and fear of freezing precipitation, we stood to deliberate our descent to our tent filled with warm sleeping bags. 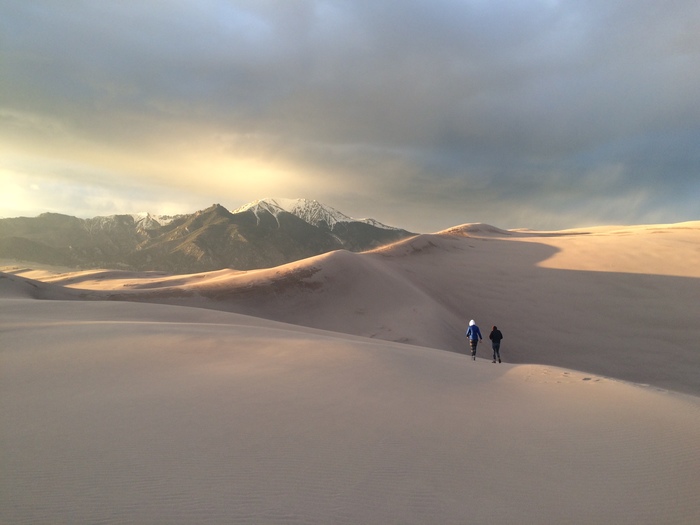 We’ve been told the best things come with patience. That if we wait a few minutes and push through uncomfortable circumstances, we are rewarded handsomely. For instance, moments before turning to leave after waiting for an hour, the sun broke the clouds and threw itself generously on the dunes.

With a full memory card of landscapes, we put down the camera and began a walk into the ethers of the light that provided so much warmth that we became persuaded by beatnikism, bohemia, and the passion for experience to strip and sprint. With our clothing in a messy scattering on the dunes, I went North and they went West. There is triumphant joy running in the buff across the smooth swell of sand dunes underneath the enormity of ancient peaks. The ability for a body to transcend such wild space in its bare, most original form.

When I collapsed into the sand to catch my breath, I looked southwest to the prints left by the lovers. A few hundred meters away, they were still making tracks, two young women running hand in hand, without an obstacle in sight.

Visiting Great Sand Dunes National Park and Preserve can be done year round but shoulder seasons of Spring and Autumn give the most pleasant temperatures. Smaller crowds can be found in winter. Recommend camping at Piñon Flats Campground or, if experienced getting a backcountry permit for the dune fields guarantees solitude. The dunes can be hiked and sandboarded and Medano Creek is a popular swim in May, June, and July. With all National Park visits, please be respectful of the land and its inhabitants and follow no trace principles.