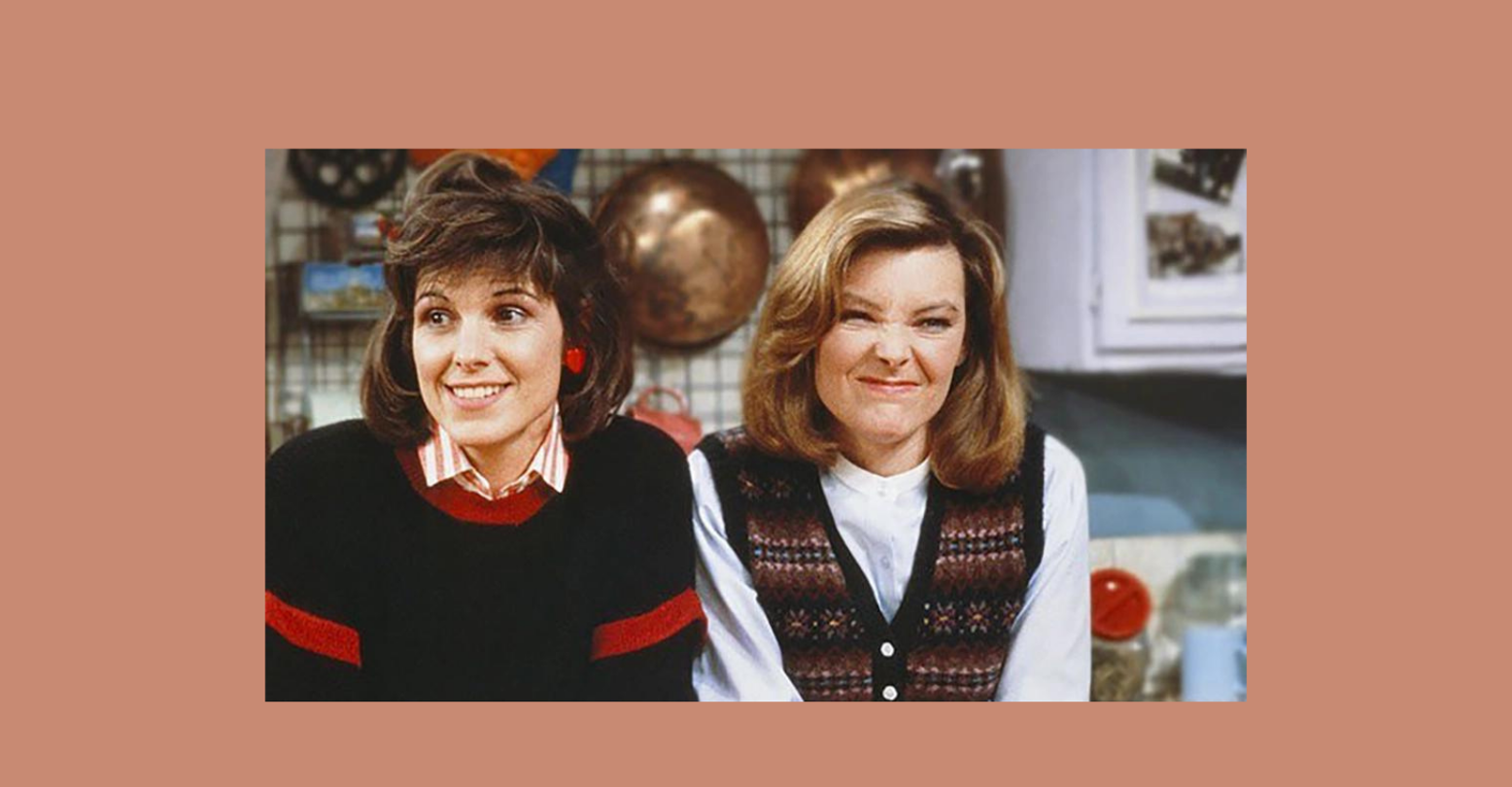 Picture with me the perfect lesbian sitcom, originally titled Two Mommies: it’s about two 30-something women raising two teenage daughters and a seven-year-old son in the West Village. Brassy Kate works as a travel agent and pearl-wearing Allie works inside the home. Their kids often breezily call out, “Hey, Moms!” as if that’s a perfectly normal thing to do.

Each episode begins with Kate and Allie walking around the city and ends with drinks in their living room. They talk and talk and talk. You might even say they process. They enjoy carriage rides through Central Park, champagne in bed, and wearing trench coats with only lingerie on underneath. During a rough patch, they see a marriage counselor, and their kids worry they might separate. But they don’t, and the series ends with the women snuggled on the couch for one final drink.

Kate & Allie, the gayest sitcom that’s ever aired, ran on CBS from 1984-1989. Aside from the clarifying detail that they are heterosexual best friends who combine households post-divorce, all of the above does, in fact, happen. (Bonus: their one-episode-before-vanishing landlord is a lesbian, revealed after Kate and Allie pretend to be a couple to avoid a rent increase.) Despite 12 Emmy nominations and three wins, the series became a lost treasure: available on DVD, but not streaming or syndication (though if the 2021 reboot pilot order succeeds, perhaps that will change?)

You might be wondering why I’m attached to a nearly 40-year-old show about straight women when lesbian characters are all around us. Indeed, GLAAD reported an astonishing 202 (!) lesbian characters for the 2021-2022 TV season. For that, I am exceedingly grateful.

For nearly my entire life, the closest I—femme lesbian, single parent, sitcom connoisseur—could get to a lesbian family sitcom was Kate & Allie.

My heart and soul, though, belong to the American sitcom. I want an expository theme song that slaps (note: Kate & Allie’s does not) and antics about sweaters shrunk in the dryer, lamps broken by children who were told not to play ball in the house, convoluted and comedic miscommunication between parents, and household trials and tribulations concluding in heartfelt moments.

For nearly my entire life, the closest I—femme lesbian, single parent, sitcom connoisseur—could get to a lesbian family sitcom was Kate & Allie. There, I saw a close-enough version of what I wanted: two women raising kids as charmingly as every other TV family that I held dear.

Per a dubious combination of Wikipedia and personal memory, there have been approximately 60 lesbians in American sitcom history, the vast majority as guest appearances or secondary/tertiary characters. Eight have been parents. It wasn’t until ABC’s Home Economics premiered in 2021 that we received the gift of a parenting lesbian couple in the core ensemble in an American family sitcom.

But what I still really want is Kate & Allie with kissing. That doesn’t seem like too big an ask, does it? Such a show, for instance, would have been right at home in ABC’s stellar 2016 lineup alongside The Middle, Speechless, black-ish, and Fresh off the Boat.

All these years later, I still live in a world of surprised reactions.

To be clear, being femme—fun-sized, white, and cis at that—carries undeniable privilege. To be femme, though, also means I still belong to men. Men who insist, “You just haven’t met the right man yet” (them, obviously) or “You’re too pretty to be a lesbian”. For people—whether I’ve just met them or known them my whole life—to claim they know me better than I know myself.

One day in a mid-aughts sociology class (18 lesbians on TV at that time, btw), while wearing an in-style tiered tennis skirt and polo shirt in assorted shades of pink, I described the above experiences. I was out, but not a soc major. My sexuality was as unknown to most of the room as the rest of me.

“You should have seen their faces,” the professor and a lesbian friend/classmate both said later.

All these years later, I still live in a world of surprised reactions. Being a femme parent—even with rainbow and lesbian pride bracelets, a purple Lavender Menace t-shirt, and a lesbian nod—overrides many a gaydar. Once they know, those who don’t want to view me as gay don’t have to, holding out hope that I’ll change. Those who want to view me as gay may offer well-meaning fashion tips. Either way, I’m asked to be untrue to myself because it’s easier for someone else.

I guess sometimes I think that having Kate & Allie with kissing would soften some of this hurt. I know that’s not how life works, but still, wouldn’t it be nice to escape to an apartment in the West Village where two 30-something women are raising three kids. We could walk around the city in the morning and process with drinks in the evening. We could maybe even enjoy carriage rides through Central Park, champagne in bed, and trench coats with only lingerie on underneath.♦

Amy Whipple is a Pittsburgh-based nonfiction writer. She holds an MFA in nonfiction writing from the University of Pittsburgh as well as an MA and a BA in English from Longwood University. Her work can be found in Pittsburgh Magazine, VICE, and The Guardian, among others. She is the nonfiction co-editor of K’in and has previously held editorial positions at Hot Metal Bridge and The Dos Passos Review.