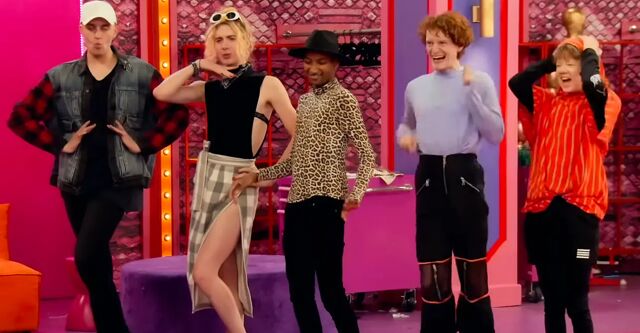 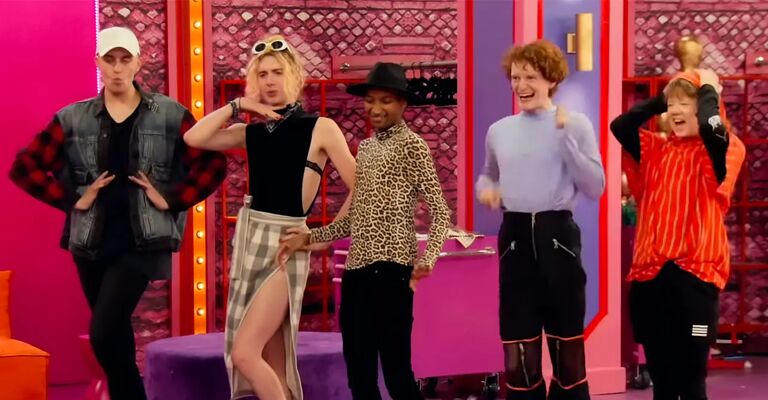 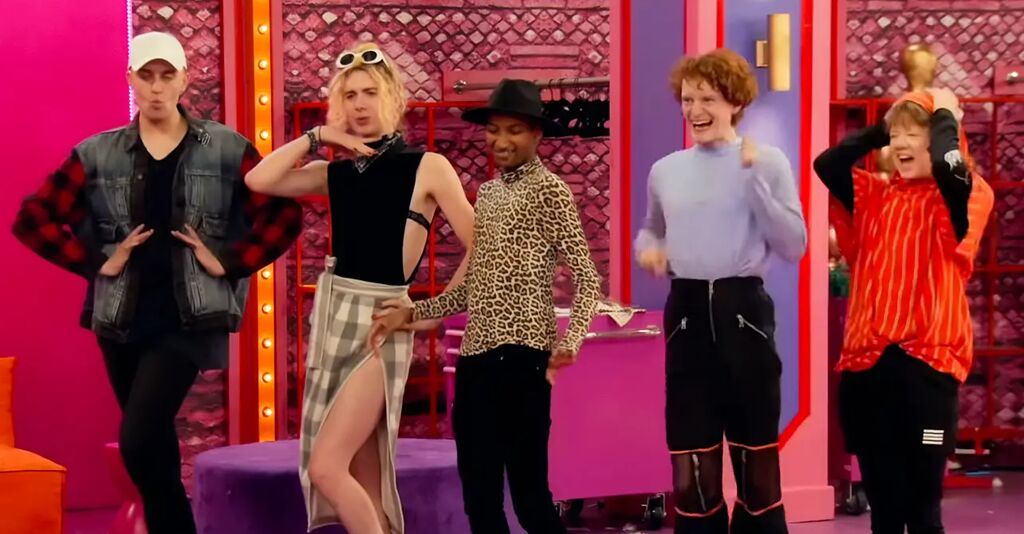 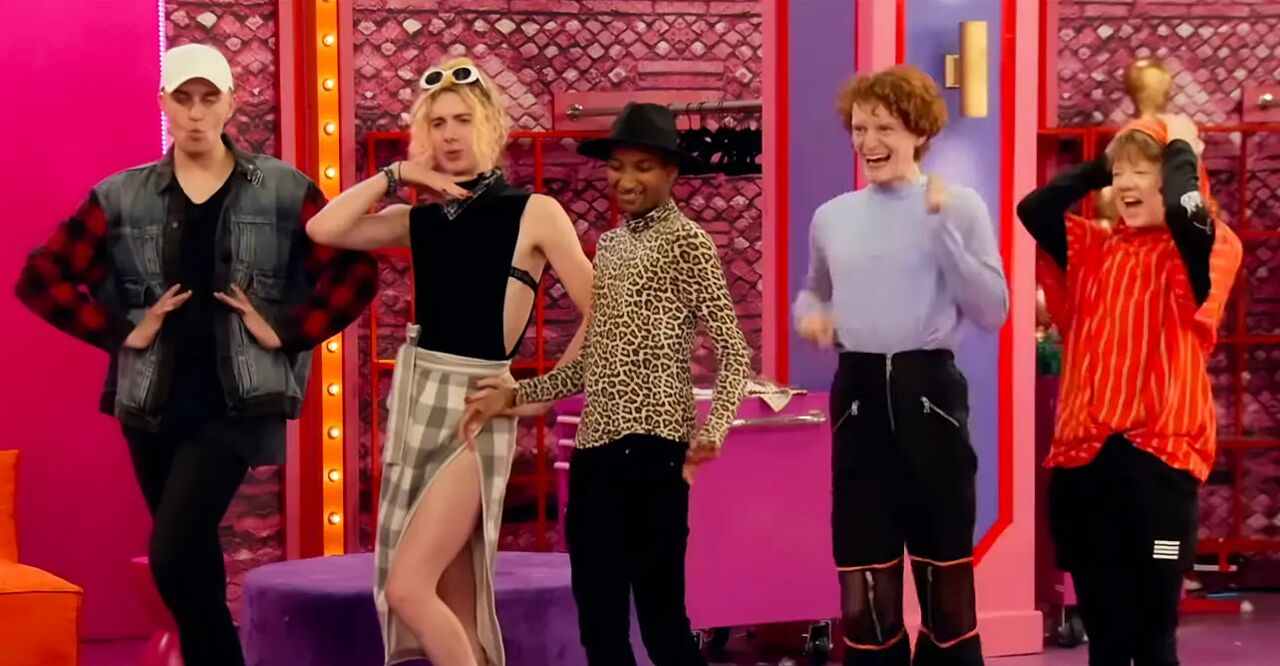 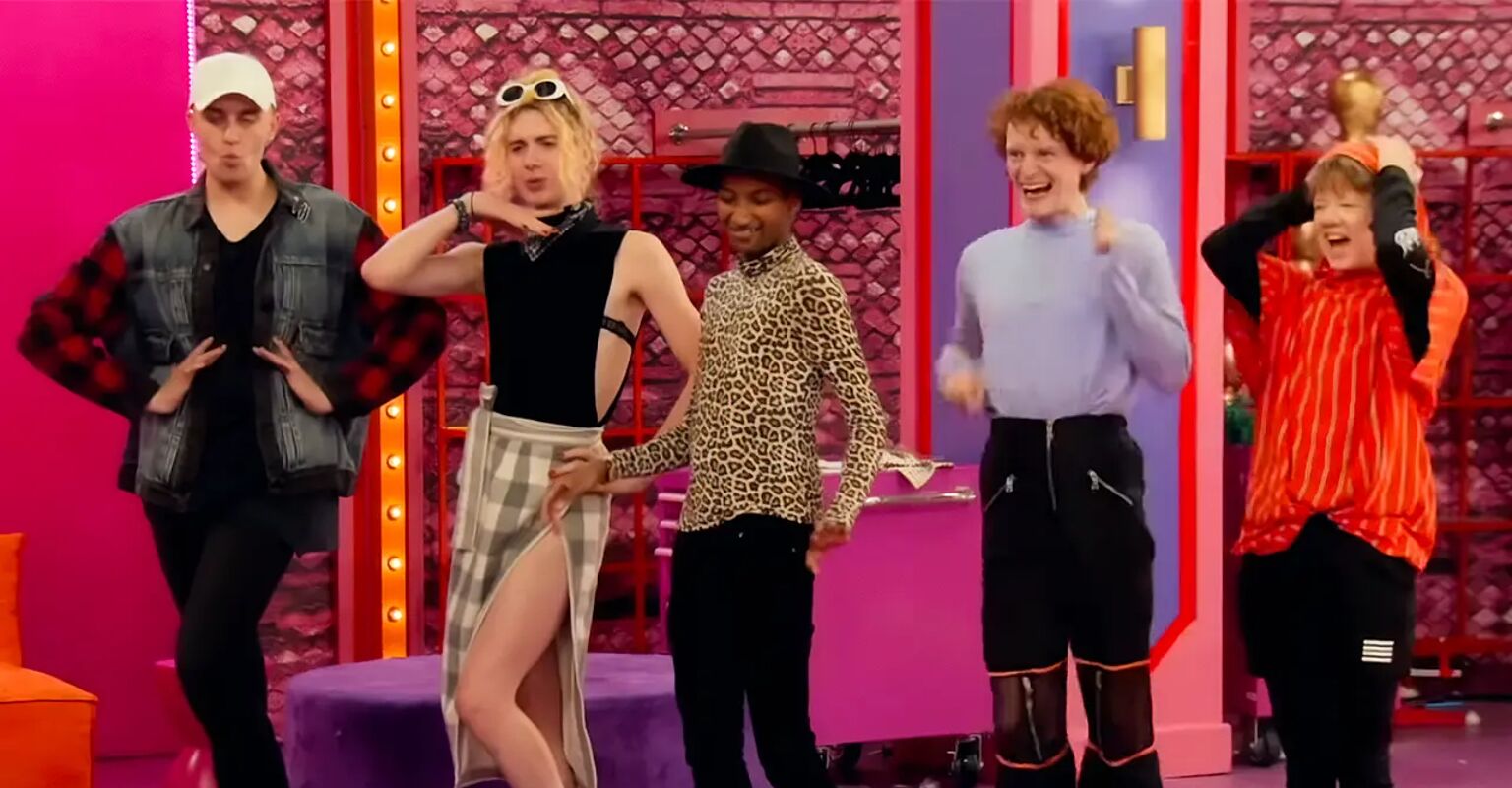 Welcome back to the INTO RuView, where we recap RuPaul’s Drag Race week by week. This episode, the top five queens tackled writing lyrics, mastering choreo, designing garments and serving face — and that’s all before they hit the runway.

The episode kicks off with the girls in the wake of DeJa and Jorgeous’ double elimination. All of a sudden, we’ve gone from still having half the cast being on the verge of the finale. And the girls are right — they’re on very equal footing. Any one of them could be going home.

The next day, Ru comes in to reveal their final challenge: starring in the new music video for his song “Catwalk.” That means designing their own looks for the video (to be constructed by someone else), writing their own verses and learning some group choreo.

Before any of that, though, they get to sit down with Ru and Michelle for a Tic Tac chit-chat. Gotta be honest, these segments are never my favorite — let’s get to the drag, y’know? But I did live for this exchange between Ru and Daya:

Mother still knows how to read!

The girls come back the next day to see their finished outfits. Let’s just say not all looks were created equal. Daya looks undeniably fierce, while Bosco looks like an extra from The Jetsons. She must have pissed off someone in production.

Once they’re in drag, the queens start learning the choreo. Everyone is doing fine, except for Angie, who insists she just needs time to nail the moves. But surprise! She doesn’t get any time, because they’re shooting the music video right this instant.

Angie doesn’t nail the choreo — in fact, she only gets the first and last move correct. But she keeps serving face in the middle, and that’s what counts, right?

In the individual sections, Bosco does … fine. Willow looks fierce, but her face is kinda dead. Camden is living her Spice Girl fantasy, surprising exactly no one. Angie struts up and down the runway, but for some reason, she ignores Michelle’s suggestion to crawl down the catwalk. But Miss Daya Bolical snaps it right up and serves one of the fiercest shots of the whole video on her hands and knees. Sometimes evil triumphs, and I’m not mad at it.

Category Is … You’re A Winner, Baby

I always go up for a fierce concept, but sometimes, classic glamor just can’t be beat. And this is glamor perfected. It’s the best Camden has ever looked, and the gown is stunning. I just … don’t see a flaw. So it has to be the best!

I almost, almost put this in first place. I love that Daya is embracing the convention of wearing a gown for the final runway while also giving it a middle finger, wearing unconventional hair, putting the bustle in the wrong spot and setting it on fire. The burnt yellow stoning is the cherry on top.

Meh of The Week: Bosco

Bosco looks great! It’s classic Hollywood glamor. I do wish the bust was more fitted to her body, but hey, she still looks fierce. It’s below Camden and Daya because it’s lacking that last bit of oomph — it’s a little too inside the box for my liking.

I always love a conceptual look, and this is no exception. Why is she a rat? Who cares. Why wouldn’t she be a rat? But it’s still near the bottom of my ranking because I don’t love the fit, and I wish the gray on her face matched the gray of her top. Also, the tail should be three times as big.

Now Angie. What is this. Angeria has served some impeccable glamor throughout the season, but this just fully misses the mark. It’s somehow both minimalist and maximalist, but neither in a pleasing way? The tulle on the top ruins the silhouette, and she literally wore this exact wig last week. I’m not mad at repeating wigs, just not two weeks in a row.

It’s time to watch the music video for “Catwalk.” First of all, this song is a bop. Ru’s newest album is one her best. Let’s break down the verses.

Bosco is first, and wow did they autotune her to death. Her lyrics aren’t doing much for me. I do love, “You can call me greedy, I feel that / The whole world, I need that,” but the rest falls flat. And her choice to sing instead of rap means that even with the same time as the rest of the girls, she can’t make as much of a mark.

Angie’s next, and I feel her lyrics are the least creative of the bunch. There’s a lot of “I’m living my dream!” and “I’m making my daddy proud!” which are great sentiments, but they’re neither original nor particularly fierce.

Daya has a great verse — sue me. Something about her flow is so satisfying to me. The whole second half of her verse has been stuck in my head since the episode premiered. And she looks the best out of everyone, no contest.

Lady Camden is also amazing. “Twist, tuuuuurn, levitate. Act, pooooose, captivate” — words to live by. Some of her delivery is a little funny, but maybe it’s just her accent.

Willow’s verse sounds the most like it could exist outside of a Rumix. “Do my sick bitch looks have you feeling ill?” and “Get lost in my sauce ‘cause it’s all an illusion” are probably my favorite lines of the whole challenge. But it’s true that her face isn’t totally connected when she’s performing.

Now we do the bit where the queens talk to their younger selves. Again, I’m not into this show’s more sentimental moments, but I hope they’re helpful to some young people out there that need a reminder of what their futures hold.

Time for the moment of truth. Who’s making it to the finale? The first queen called safe is … Daya Betty! I don’t think many people expected her to make it this far, but she absolutely deserved it. Wouldn’t it be a gag if she went on to win the whole thing, after being eliminated in her first episode? I’m kinda here for it.

Lady Camden isn’t just safe; she wins the challenge! I might’ve given it to Daya overall, but I’m a Camden stan, so I’m absolutely okay with this outcome. I’ll be shocked if Camden doesn’t at least make it to the top two of this season.

So we have our bottom three: Bosco, Willow and Angeria. I would’ve kept Willow as safe, considering how good her verse was, but Ru saves Bosco instead. It’s hard to imagine a finale without either Willow or Angie, but here we are.

They lip sync to “Telephone” by Lady Gaga and Beyoncé, which, ohmygod, FINALLY. But why would they waste this song on an episode where they knew everyone would be in gowns?? Give them a ballad or something!

Still, they both turn it out as best they can. The best part is the last chorus, when Willow and Angie turn it into a duet and perform together. (I mean, “Telephone” was technically already a duet, but you know what I mean.)

Ru tells Angie to shantay. And then … he also tells Willow to shantay?? The season of non-eliminations adds another to its belt, and we have a top five moving into the finale. I do love all these queens, but it’s wild that more than a third of the total cast is in the season finale.

I’m very curious what the format will look like for the grand finale. They can’t easily do a lip sync smackdown with five queens, so I guess the producers will have to get creative. But first, we have a reunion — hopefully one with some real drama, unlike last year’s. Then we finally get to crown our queen. I’m Team Camden! Or maybe Team Willow! It’s my RuView, I don’t have to choose if I don’t want to.