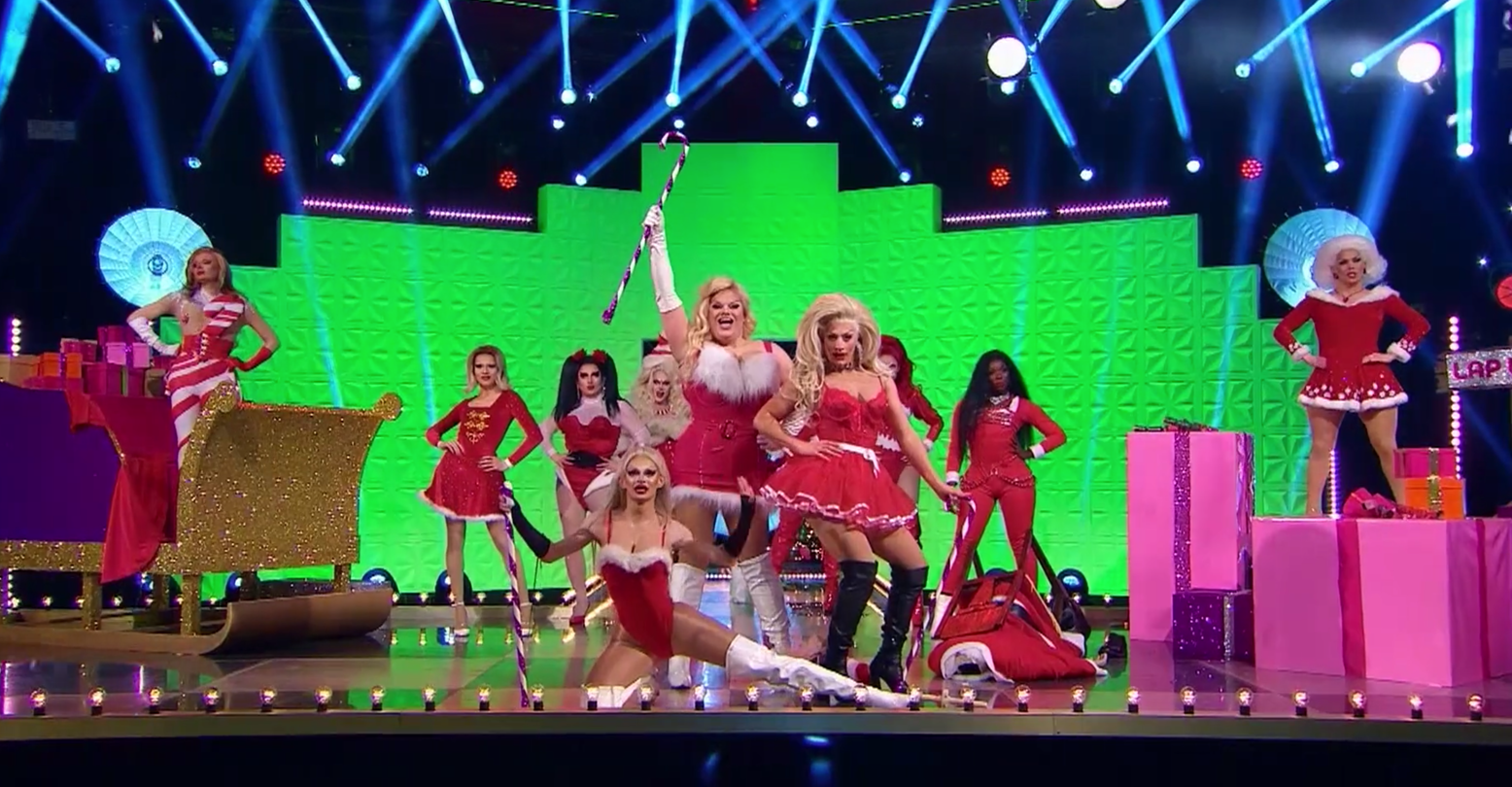 Welcome back to the INTO RuView, where we recap “RuPaul’s Drag Race” week by week. The tenth and final episode of “Drag Race UK” Season 3 saw the queens kompeting for the krown for the last time, with a Khristmas twist. Oh, sorry, I’ve got Krystal with a K on my mind. Spoilers ahead!

The next day, the girls come in to a highly decorated werkroom. Apparently, it’s Christmas! A little jarring considering this episode came out on Thanksgiving — then again, this is a British show, so why should they care about Thanksgiving?

Prior to the challenge beginning in earnest, each girl sits down with Ru and Michelle to have their trauma exploited — I mean, to spill the tea! There’s not much to report here, except that Kitty is first, and it was at this point I knew she had no shot of winning. Ru was clearly unexcited by her, and Kitty wasn’t taking any of his bait to provide a tragic backstory. Take this snippet of their Q&A:

Ru: “Everyone says you’ve got a great attitude. What’s the other side of that upness?”

Kitty: “There are always the dark days, but I always try to see the positive!”

Ru: “Are your parents still together?”

Kitty: “They love each other so much! … My whole family are so supportive.”

So Kitty is happily optimistic and comes from an endlessly loving and supportive family. Beautiful! But armchair psychologist Ru doesn’t crown queens who don’t show a weak spot at some point, which Kitty never really has.

After teatime, the girls head to choreography. Both Ella and Kitty are killing the group section off the bat, while Krystal is struggling to keep up. But it’s like Kitty says: “Krystal can’t pick up choreo. And the next day she’ll come in and she’ll absolutely bloody smash it. Boring!”

It’s coronation day! As they do their makeup for the final time, the girls take a heartwarming walk down the season’s memory lane. Honestly? Despite its rough patches, I’m sure we’ll be able to look back on this season fondly once we’ve had some time away from it. The highlight of this segment is Kitty’s eerie Veronica impression. I truly felt her presence.

No one does poorly in the performance, but it must be said: Krystal kills it. Her verse is catchy as hell — “Get crystallized at Christmastime” and “It’s time to party with Miss Versace” will not stop playing in my head — and she nails the choreo. Ella also does a great job; Her singing voice really shines here. Kitty is unfortunately the weakest, though she’s not bad. Her verse just doesn’t hit the same way and is a little too crass (at least, according to Graham).

Plus, though all three girls are busty blondes, Kitty’s breastplate is by far the most distracting. I know there has to be a seam, but what is going on at her neck??

Is anyone shocked that Krystal had the best look out of these three? This look is surprisingly sophisticated and mature — she looks like the matriarch of the Versace empire. And as per usual, her mug and hair cannot be beat.

Meh of the Week: Kitty Scott-Claus

On the positive side, this is my favorite hair Kitty’s ever worn. On the negative side, kinda … everything else? I get she’s going for a Scarlett O’Hara meets Galinda moment, but the fabric of the skirt is a bit floppy and wrinkled. And why no jewelry? Kitty’s face, as always, is gorge, but it’s hard to overlook some of those issues.

It was when Ella turned the corner in this look that she officially lost the season. I don’t think there’s a single aspect of this look that I enjoy, from the bulky silhouette to the awkward length to the garish fabric to the bizarre hair to the mismatched accessories. Y’all may recall I was Team Ella headed into this episode, but y’all. You can’t crown somebody wearing this outfit.

I know I said Krystal was the best, and though she does look amazing, it was basically by default considering what the other two wore.

Ru spends a long time with the girls on the runway, first giving critiques, then asking for advice to their younger selves and, finally, why they deserve to win. I know this section shouldn’t really have a winner, per se, but … Krystal once again won. I usually hate the “What would you say to little government name?” responses, but Krystal’s actually did get me a little emotional and made me laugh at the same time. “And don’t go too fucking ham with the filler, calm down love,” she concluded. “You’re only 19, Jesus Christ!”

All the eliminated girls are back back back again, giving a mini runway of their own. So this season can have one more runway ranking, as a treat.

I’d have liked bigger hair, but this gown is still immaculate. Miss Scone better appear on Season 4 or RuPaul will be hearing from my lawyers. (And don’t sue me for this screenshot, please — they never showed her full body close up!)

This is Choriza at her best: a classically gorgeous Spanish rose. An underrated runway queen.

Sigh. Veronica … what led you to this garment. Where did the pain begin.

I believe in Elektra. I truly think, one of these days, she’ll turn a good look. Today is not that day.

It all comes down to this: the final lip sync. Ella, Kitty and Krystal face off to “You Don’t Own Me” by Dusty Springfield. Kitty is giving comedy. Ella is giving … nothing. Krystal is giving elegance and emotion. As with literally every category this episode, Krystal steals the show.

Coming into the finale, Krystal was my last pick for the win. But watching her smash the remix, the runway, the final speeches and the lip sync, I knew she’d be walking away with the crown. And she absolutely deserved it! Why have a finale at all if it won’t impact the results?

Just like that, Krystal Versace becomes the youngest winner across all “Drag Race” franchises. She’s the first fashion-focused U.K. winner, and as Ru now infamously said, she was born to do drag. I’m very excited to see what she’ll do with her reign, and I hope Ella, Kitty and a few more of these Season 3 girls find their way onto an All Stars of some kind in the near future.

Peace out, “Drag Race UK.” It’s been real. And I’ll see y’all for Season 14 of the U.S. version, which premieres in … January. My god. I love this show, but the rate at which it churns out seasons is honestly alarming. Can someone check on Ru?