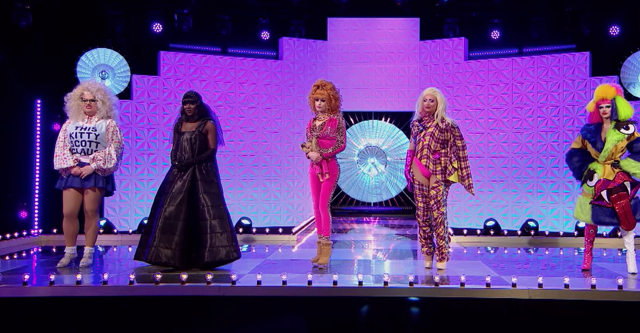 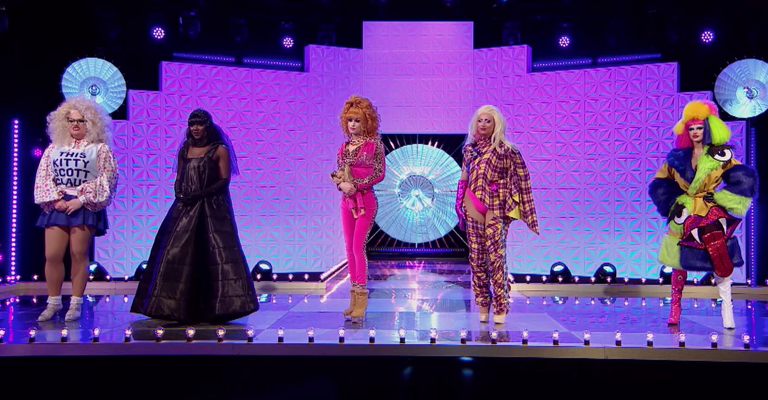 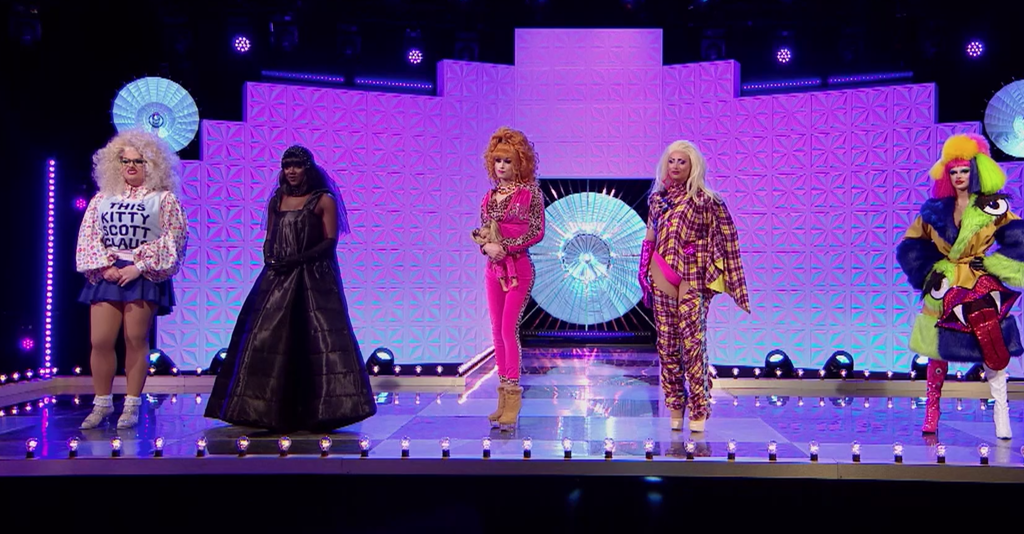 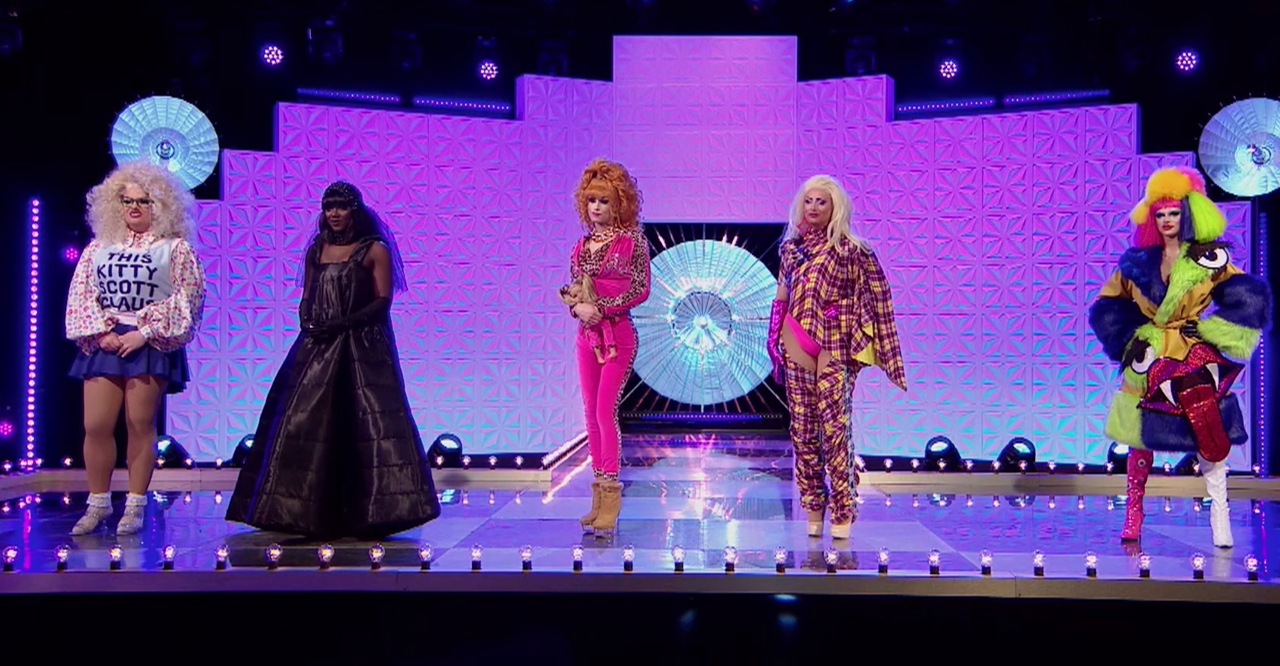 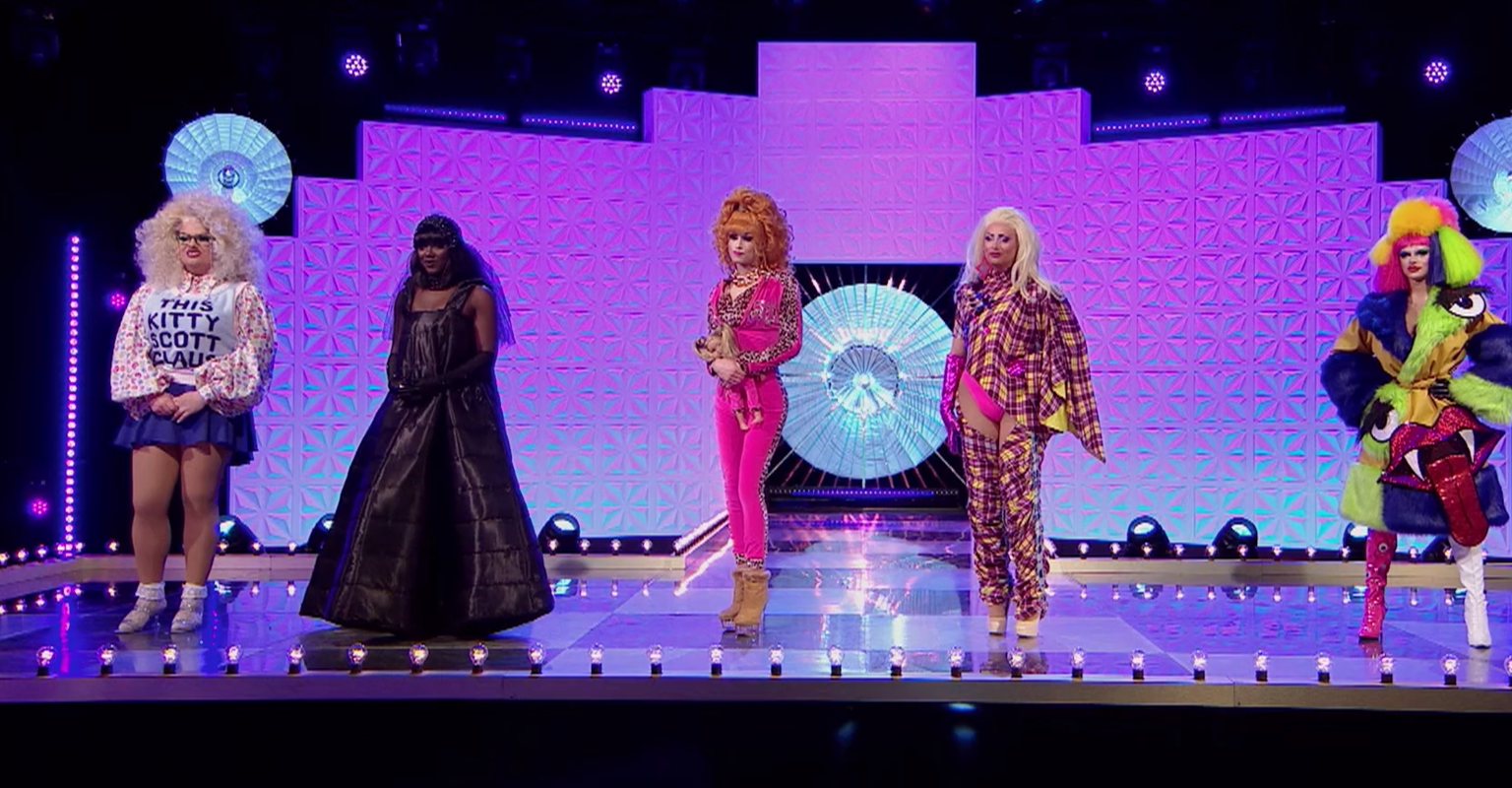 Welcome back to the INTO RuView, where we recap “RuPaul’s Drag Race” week by week. The seventh episode of “Drag Race UK” Season 3 saw the queens rush to get ready for a rare sight on “Drag Race”: an entirely original challenge.

The girls come back into the room after Choriza and River’s tragic double elimination. They don’t seem particularly torn up about it. As Vanity puts it, “Bye! Hahahahaha.”

Bizarrely, Scarlett calls out Ella for not being funny, despite Ella literally winning the Snatch Game moments before. Scarlett needs a bit more self-awareness. Confidence is one thing, but cockiness and delusion isn’t cute.

The next day, Ru comes in to tell the girls that this week’s challenge is the Miss Fugly Beauty Pageant. Basically, it’s a Ball challenge. They need to serve three looks, but there’s a twist. They won’t know each runway category until right before it happens, and they’ll have far less time than usual to get ready for each look. Oh, and the challenge starts RIGHT NOW. They have 69 minutes (get it?) to get into their first look, fugly swimwear.

As everyone gets ready, Krystal reveals that, despite her “sex on legs” persona in drag, she’s actually a virgin. Really, that shouldn’t be taken as such a shock — she’s only 19, after all — but it’s a good opportunity to check our biases around both queer masculine people and drag performers, all of which are generally seen as hypersexual. I’ll admit, I was surprised by the reveal too. But I shouldn’t have been.

Anyway, it’s already time for the first runway! Now that we’re (very suddenly) down to the top five, we’re gonna rank all five queens in every category, best to worst.

Admittedly, this category is hard to judge, as are all the looks this episode. What are we valuing here? The actual ugliest look? Or the look that takes “ugly” aesthetics and makes them either fashionable or campy? I’m partial to the second interpretation.

With that in mind, Kitty demolished this category. Her look rides the line of all three qualities — an ugly pattern and fake teeth, a cute silhouette and hair and a campy presentation.

Ella’s only weakness here is potentially not going ugly enough. Maybe I just have terrible taste, but I don’t actually think her swimsuit is that fugly. Luckily, her presentation was killer. Not that we haven’t seen a drunk impression on the runway before, but Ella’s was nuanced enough that it had me cracking up the whole time.

Meh of the Week: Krystal Versace

Props to Krystal for stepping out of her comfort zone! I didn’t expect a more monstrous look like this from her, and I think it’s a clever interpretation of fugly. At the same time, it’s missing the camp element that I think fugliness calls for. Very middle-of-the-pack.

Something about Scarlett’s breastplate is really throwing off her silhouette here. I also don’t love cat lady as a concept. It’s a little overdone, so if you’re gonna go there, really go there, y’know? Come out covered in wet cats. Or better yet, be the wet cat yourself! Yeah, sorry, not a fan of this one.

If the challenge were simply to wear an ugly swimsuit, Vanity would get top marks. But objectively, this looks bad. I hate the color yellow in general, and this silhouette is a doing nothing for Miss Milan.

Category One, done. Ru reveals that the next challenge is to head backstage, where they’ve set up a makeshift charity shop. The queens have just 60 minutes to put together a look incorporating at least five “fugly charity shop leftovers.” I love the concept of a thrifting challenge. It’s something drag artists do all the time in the real world, so testing the queens’ ability to style off the rack is long overdue for “Drag Race.”

The girls rush backstage, only to be interrupted by the real Charity Shop Sue, who Krystal portrayed in last week’s Snatch Game. Gotta say, if I were in that room struggling to get ready in a rush, I’d probably snap at her to shut up and let me get dressed. But it is a nice infusion of UK culture, something this season has been lacking overall.

Ella always has a pretty mature look in drag, and here, she’s leaning into it in the best way possible. All the pieces she chose are pretty blah, which makes the styling here all the more impressive. The pastels are gorge, and the purple wig is the cherry on top; it’s giving high society woman from mid-century Mars.

I always live for a Scooby-Doo reference, and getting a cute Daphne look together on a time crunch is a full serve. If she were only wearing a ginger wig, she’d shoot to the top of this list.

Meh of the Week: Vanity Milan

This dress looks tailor-made for Vanity. Orange truly is her color. But wow, I hate that wig. It evens out to a perfect “meh.”

Krystal looks perfect. What’s new? She spent a lot of time fixing her makeup from the sea monster look, but honestly, I wish she’d kept it messy and then leaned into that with this look too. It’s the fugly ball, girl! Where’s the fugly??

Scarlett is just as boring as Krystal, but just doesn’t look as good. This is about as simple as you could possibly go with this challenge, and for that, it gets my worst ranking.

The last category is a look blurring the line between fugly and fashion. The girls only have 30 minutes (!!) to get ready. They’re not wasting any time, and I won’t either. Let’s get into it.

Category is … Fugly But Fashionable

You gotta give the bitch props: Krystal knows fashion. She was far and away the most stylish, but she still kept the fugliness alive through clashing colors and garish faux fur. It’s the category to a T.

Alan was right on the money comparing this to recent Gucci campaigns — nerd chic is in! And Kitty was very clever to tap into that phenomenon. It’s the far superior cat lady look of the night. She only gets points off for being a little too similar to her swimwear look, but still, she killed it.

Meh of the Week: Vanity Milan

This is probably my favorite Vanity look of the season. The silhouette is very high fashion, and the padded texture is a great tie-in to the fugliness of it all. But once again, she’s dragged down by her wig. I can’t wait to see how she glows up with a higher budget post-”Drag Race.”

This look is cute! But to me, it doesn’t give either fugly or fashionable. It’s just a pretty normal outfit. It’s more of an “Eastenders” cosplay, really — Scarlett should’ve worn this for her hometown runway in the first episode. As it stands though, she looks good, but is way off theme.

Honestly, though, all five girls turned this out! This is probably the closest challenge of the season, and my favorite episode so far. That’s due in no small part to the creativity of the concept. Racing against the clock gave the episode great energy and suspense, and the styling challenge in the second category was both entertaining and a great way to tap into a real-world drag skill. The point is, original challenges like this keep the franchise fresh as it keeps pumping out seasons. Producers, if you’re reading, more out-of-the-box challenges, please and thank you!

After the runway, Krystal gets butthurt that none of the girls picked her last look as their favorite. On the one hand, sure, she had a great look and deserves some praise for it. On the other hand, who cares what the other girls think? They could only choose one look, and if they preferred a different one, so be it.

She’s also upset that Scarlett compared her to Anubis. But, uh, yeah. That’s about the same wig. Seems like a valid observation.

The winner of the challenge is, at long last, Kitty Scott-Claus! She absolutely earned it, and seeing her absolutely giddy reaction is worth sitting through this entire season. Finally, she has a Ru Peter badge, and having never fallen in the bottom, that skyrockets Kitty from floater to genuine front-runner. As she deserves.

The rest of the breakdown is pretty clear-cut. Ella and Kitty are safe, and Scarlett and Vanity land in the bottom two. Both have one win and two bottom placements, so it’s a pretty even match. Well, it’s an even match until the song starts playing.

It’s “Scandalous” by Mis-Teeq, featuring this week’s guest judge Alesha Dixon. From the very start of the lip sync, it’s clear that Vanity is going to slaughter Scarlett. She reveals into a stunning bodysuit, serves face on all the verses, and delivers some truly wild dance moves. Those spins?? If she ever quits drag, Vanity has a future as a tornado.

Scarlett, bless her heart, is doing her best, but there’s no contest. Vanity just gave the best lip sync performance of the season — maybe of all “Drag Race UK” — and Scarlett was there.

Scarlett at least delivers a great exit, giving us an “Eastenders” reference: “YOU AIN’T MY MOTHER!” she screams.

So, we have our top four: Ella, Kitty, Krystal and Vanity. What’s wild is that all three aside from Vanity have never been in the bottom two. I think it’s anyone’s game. Except Vanity. So sorry, babe, I do love you, but this is not your time.

Next week is an acting challenge. Ella or Kitty has to win this, right? Unless there’s an upset, we may be seeing Krystal in the bottom for the first time. And unless there’s a miracle, we can expect a cringe-worthy script.