I’m a polyamorous trans woman. For those who don’t know the transfeminine community the way I do, that might come as a surprise. The broader world tends not to see people like me as desirable, or makes us an uncomfortable fetish. That a world like that could make it possible, even easy, to be a woman like me with multiple committed lovers and other dalliances seems hard to imagine, but for a lot of us, that’s just how life works out. And living this oddball life taught me things about how to be a good friend and partner that I might never have learned any other way.

I didn’t arrive at my earliest relationships from a healthy place. I spent my youth convinced that I had to find and keep the one girl on the planet who would find my miscellaneous quirks and insecurities tolerable — I didn’t dare hope for “endearing”– and then do everything I had to do to keep her, because there wouldn’t be another. I didn’t yet know that I was autistic or that I was a trans woman, and not having those names or the understanding they could bring made me despair at my strangeness.

Being trans without knowing it fills the mind with alienated, dissociated haze, as mind and body alike try to hide from how wrong absolutely everything feels. It made me distant and eager to distract myself with work, play, and everything in between, to avoid feeling any of my feelings. But I felt richly and deeply anyway, and not having the option of kinship with my fellow autistic or transfeminine people meant that, no matter what friends I made, I felt alone. When I wasn’t suppressing a lot of myself to try to fit in with the mainstream, I was constantly probing the women around me, trying to find out if someone among the small number of people who found me worth having around might want a little more. Even then, I was not hopeful. It seemed a stretch that I could find someone who genuinely loved or wanted me, warts and all, and I thought I would ultimately settle for someone who tolerated me, whose ideal partner I could then spend my life halfheartedly pretending to be. Even that sounded better than loneliness.

That is how I arrived at my first adult relationship, in graduate school thousands of miles from where I grew up. I arrived with a youthful dating life composed entirely of mistakes kept up far too long, and a model of human relationships that didn’t acknowledge my own happiness or mental health at all. She and I made an interesting pair, but the incompatibilities that would drive us apart were, realistically, there from the start. What I needed was the tools to finally see them, and these, she unwittingly gave me. Two things had to happen: I had to figure out that I’m a trans woman, and we had to take up polyamory.

It was her idea that we open our relationship. She had done much reading on the subject and it seemed like it’d help reinvigorate our flagging affections. I took to the practice more readily than she did, to her surprise. It wasn’t long after that that I started dating a transfeminine friend, who was among the forces that helped me recognize my gender.

And that changed everything.

I’d spent a lot of effort trying to build up my confidence before that, in and out of this relationship. Those efforts were doomed, for masculine confidence cannot stand on a feminine foundation, and no confidence at all lasts long next to the quicksand of not actually thinking one is worth anything. But once I recognized that my own mind had felt so alien and my body so hostile because I was actually a woman, I didn’t just take up a new wardrobe, hormone regimen, and name. It was like finally finding myself, and settling all of the jagged pieces of who I had been into a better, more stable shape. I could be confident now and mean it. I discovered a level of appeal in myself that I didn’t know how to process. Women interested in women were drawn to me, as my body language and sex appeal finally coalesced into something that made sense to them. I’d spent the previous 25 years thinking that everyone who had ever shared intimacy with me was doing so out of pity or accident, but now…I was hot.

I accumulated partners like a Pokémon trainer collects pets, peaking at six at once. I spent more and more time with them and less and less with the woman whose opening of our relationship enabled this excess. There was never a point where I could be “satisfied.” I cared for each of them, and I reached endlessly for more, no matter how scant my time became or whether I was treating them as well as they deserved. Some of them made clear they wanted better from me, but I wasn’t yet ready to be that person. I was distracting myself from the ongoing, expanding tire fire of my longest relationship, too afraid to do anything about it, not willing to admit it couldn’t be fixed. Transition fixes a lot of things for trans people, but it doesn’t fix that. I had uncorked the most important bottle I would ever own, but I wasn’t yet ready for what was inside.

No matter how indulgent my sexual hedonism became, some part of me never stopped thinking I didn’t actually deserve happiness. I still had that nagging voice in my own mind, telling me I could never let any of them go, because finding one was impossible fortune enough, but six? That is a lottery win on the day lightning strikes a meteor and induces a diamond shower directly into one’s morning teacup, or so my insecurities insisted. So the rift between me and that long-established partner grew ever deeper and more obvious, but I couldn’t acknowledge it. I had to lose one of the six to emotional neglect and unforced mistakes, and have long talks with another about what the situation was doing to me, before I realized it had to end.

It was a hellish and complicated breakup, and she effectively took with her two of my partners who decided they liked being her friends better than being my lovers. But when it was done, I could breathe again. It was time for me to think long and hard about the unhealthy patterns and habits that had gotten me to this point, and what the future could look like.

Polyamory was instrumental in my self-actualization. Little in my life feels as natural as the fact that I can love and be loved by more than one devoted long-term partner, and that having the occasional outside tryst doesn’t diminish that love. But it wasn’t until I took the most loving action toward myself that I could take, ending a relationship that had grown toxic, that I could experience that love honestly. Until then, I was covering that hole in my soul with a syrupy dollop of sex, convincing myself I was still desirable by reaching everywhere else for desire.

Since then, I feel weights lifted that I didn’t know I was carrying. My relationships with my partners and friends have grown, and I feel able to appreciate them in ways that were harder when everything was discolored by my insecurities. I no longer feel compelled to collect every partner I can, or to make a lover out of every female friend I make…yet, every now and then, I still meet someone new whom I can tell is going to be important for a while yet. What brings me the most satisfaction, though, is that I’ve escaped this ordeal with a newfound willingness to end dating adventures that aren’t working out before they take over my life, which has already spared me some frustration.

I’m not yet healed from what a lifetime of abuse did to me, and I hold no illusions that the rest of my growth will be easy or fast, but for the first time, it feels possible. I may yet know a future where I’m not passively convinced that I don’t deserve any of the good things in my life, and that idea thrills me.

And I couldn’t have done it without my Sapphic harem. 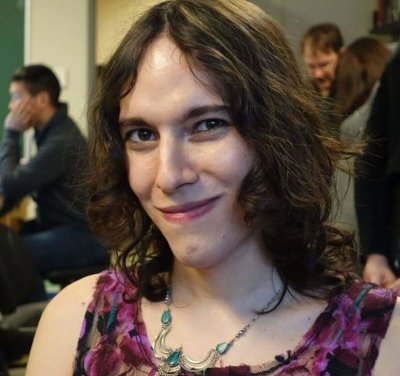 Alyssa Gonzalez writes about transgender, immigrant, autistic, polyamorous, and other issues on her blog, The Perfumed Void. She lives in Ottawa, Canada with her two cats and other pets.
IN CASE YOU MISSED IT