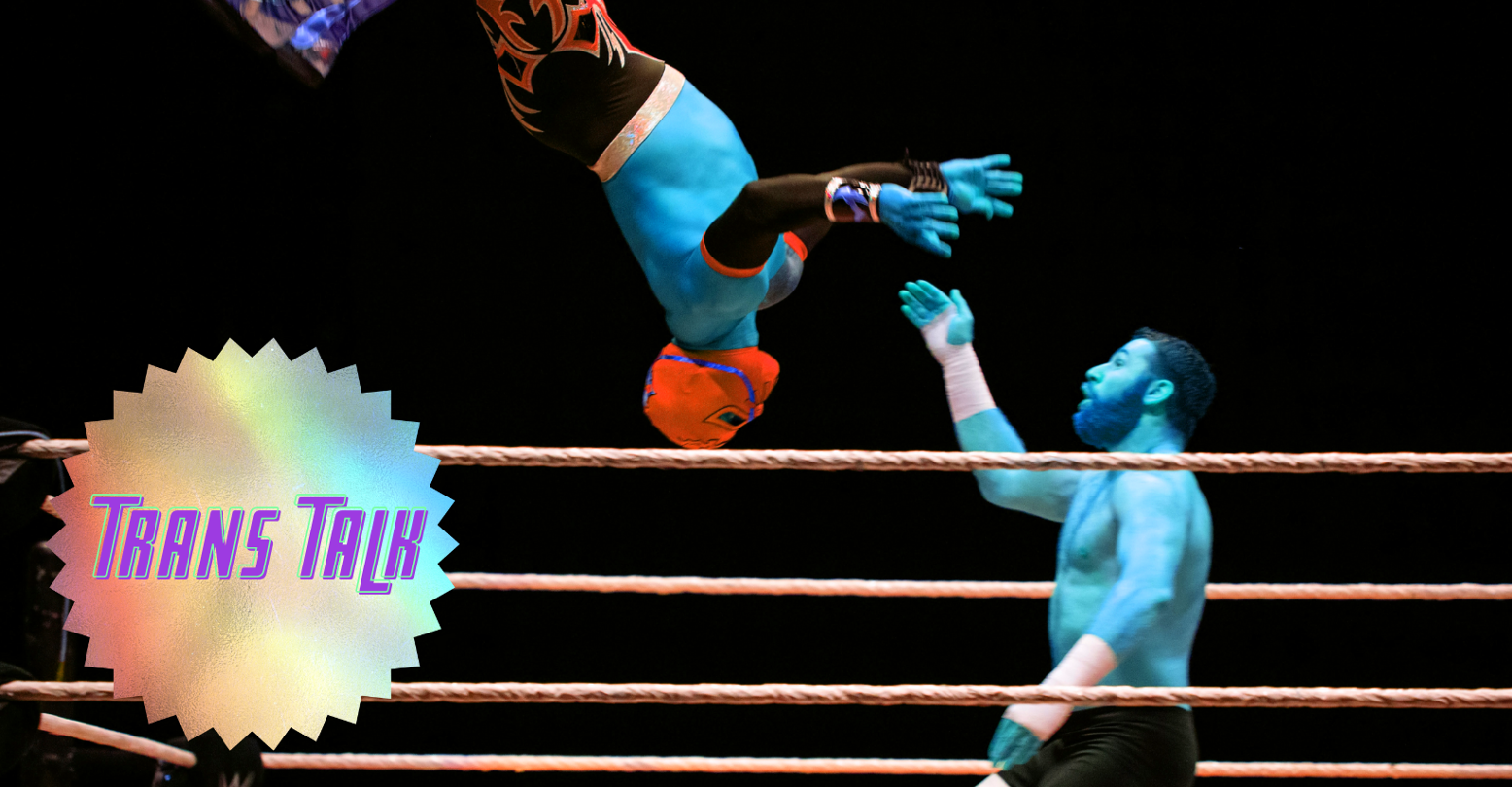 For the last few years since I came out as non-binary, I’ve frequently found myself investigating a lot about my past and present selves. As I question what it means to be “trans enough” in a contemporary light, I’ve also been looking back at the cultural touchstones that helped shape my identity, revisiting a lot of things that once made me happy and seeing them in a new light. When that clicked, I started wondering what kind of connections other trans folks have with things from their lives that resonate deeply with them.

And so, Trans Talk was born. Each column will bring a different trans person—from cultural critics to filmmakers—to the table to have short discussions about a certain topic they feel strongly about as trans. Some may be expected, while others will certainly surprise.

The first of these kicks off with guest Nadine Smith, co-host of the hotbox the cinema podcast and writer with bylines at Pitchfork, Hyperallergic, and more. As for our first subject? She’ll be introducing me to the world of wrestling.

Juan Barquin: Okay, I have to make a confession: I know barely anything about wrestling outside of all the commercials I saw for WWE Smackdown on UPN when I was younger. As fun as it seems from you and our friends tweeting about it, the universe of wrestling seems so massive. Before we dive in, how and when did you get into wrestling?

Nadine Smith: It is indeed a pretty massive world and understandably intimidating to outsiders. Like anime, comic books, or video games, it’s a bit of a cultural alternate universe, and I think all of those media fandoms are particularly difficult to get into and easy to feel imposter syndrome about if you haven’t been a fan since childhood. In the 90s & 2000s, the in-your-face, aggressive “Attitude Era” of the company formerly known as WWF was, along with nu-metal and rap music and violent horror movies, one of the foremost embodiments of everything I was taught was sinful growing up as a Mormon kid in conservative central Texas. Around 2015 or so I started seeing a ton of friends in that nebulous world known as “Film Twitter” posting crazy clips of wrestlers in Japan like Shinsuke Nakamura and Kenny Omega and indie promotions and I was like damn, maybe there’s something here.

I remember one night distinctly early in 2016 when some friends and I were screwing around with the character creator in a WWE 2K video game, and then we were like, wait, maybe we should just watch actual wrestling. The first event I viewed in full was that year’s Royal Rumble, and from there I was hooked: the costumes, the entrance music, the trashtalk, the stunts, and the constant blurring of fiction and fact, sports and soap opera, writing and improvisation. For the next few years I was a fairly casual fan who kept up with the major WWE pay-per-views and little else, but at some point earlier this year something in my brain completely snapped and it’s become my entire life, to the detriment of all my other media consumption. Very coincidentally—or maybe not—the exact time I started watching nothing but wrestling, I also started HRT.

“I was hooked: the costumes, the entrance music, the trashtalk, the stunts, and the constant blurring of fiction and fact, sports and soap opera, writing and improvisation.”

Juan: Right off the bat, the way you describe falling in love with wrestling really stands out to me. Just based on the character creator, it’s something I’ve always been drawn to in video games: getting to play with my persona. Looking back now, it’s obvious to me the reason I was always into playing with women, or as men who weren’t so traditionally “masculine” and I was wondering if it was the same for you there. When it comes to talking about performance though, I’m really interested in the way identity feels inherently tied to wrestling; you’ve got folks coming up with their gimmicks and these exaggerated personas and then they’re expected to keep performing as such (unless a heel-turn is called for.) Now that you mention HRT, I’m wondering how wrestling tied into your own trans experience.

Nadine: There’s a saying amongst wrestlers that your wrestling persona is your real self turned up to 11. I don’t think that’s always necessarily true—there are obvious famous examples like The Undertaker or Goldust where someone is very explicitly playing a character that’s very separate from their actual self. But I do think that sentiment generally holds water, because the kind of outsized performance, boastfulness, and confidence that you need to succeed in wrestling encourage you to exaggerate parts of yourself, play around with your identity, and tap into certain impulses or emotions you wouldn’t outside of the ring.

It’s something I’ve always been drawn to in video games: getting to play with my persona.

There’s also a way in which identity is fluid in wrestling, and not always your own—wrestlers go through a kind of transition when they move from one company to another, sometimes reinventing themselves entirely or other times remaining essentially the same but just changing the name, and monikers and personas are, especially in the case of the WWE, often not the property of the workers themselves. I think that allows for a really unique space to play around with and explore your identity, both as a wrestler and wrestling fan.

An indie wrestler I’ve been obsessed with recently is a perfect example: The Dark Sheik, who wrestled for years prior to coming out as a trans woman and used an in-ring drag persona as a way to experiment with gender before transitioning. Wrestling has always struck me as very queer—it goes without saying that it’s often extremely homoerotic and very campy—but when I finally accepted myself as trans, my view of wrestling radically changed and my connection to it deepened: it now seems specifically very trans, a medium in which your flesh is the canvas and your identity is fluid, to the point of physically modifying your body. What is steroid usage, after all, but its own kind of hormone replacement therapy?

There’s also a way in which identity is fluid in wrestling, and not always your own.

Juan: I was looking into Dark Sheik’s performances and saw that her GCW debut was in a match with Still Life With Apricots and Pears (which is an amazing name) just last year. Is the indie side of things where you primarily see these explorations of queerness or is it part of the mainstream as well? It feels like so much of what I know of the mainstream requires identity to be used as exclusively a gimmick as opposed to getting to see wrestlers really make their personas about themselves – and obviously there’s still so much pushback in the realm of sports to queer folks and especially trans athletes, as we’ve seen, so does that sort of change depending on what the spotlight is?

Nadine: That divide between indie wrestling and the televised mainstream is huge, and I think in many ways the representation of queerness in wrestling much like film: you have to go to the alternative, to the counterculture, to find an authentic, nuanced depiction of queer identity, whereas in the mainstream you’re mostly just digging for subtextual scraps. There’s a long history of queer-coded wrestlers, from Lucha Libre’s fabulous drag-like “exoticos” to the 1990s superstar Johnny B. Badd, who was a flamboyant and unrepentant knockoff of Little Richard.

Though queerness is often a way to generate “heat” and these characters are presented as heels, they sometimes do genuinely get over with the crowd, in the same way that marginalized audiences have often found themselves rooting for the villain when watching a film. You see that idea of identity as “gimmick” very clearly in the case of someone like Chris Kanyon, a closeted superstar for WCW and WWE who, in the months prior to his tragic suicide, was toying with introducing his sexuality as an in-ring bit before genuinely coming out. Now that companies like AEW and even WWE are trying to be somewhat more “progressive” and “diverse,” I think there’s a fear of reducing identity to merely a mask or costume, which explains why you’ll pretty much never hear anyone on AEW television acknowledge that their headlining heel Nyla Rose is trans (though she’s quite vocal and proud about her identity on social media, and more than happy to take transphobes to the mat.)

Though gender and sexuality can still very much be “gimmicks” in the indie world, I think it has, on the whole, become a space that allows for a more genuine means of self-expression. A few of my favorite recent queer wrestlers play as much with wrestling history as they do their own identities: MV Young, the self-styled “Polyamorous Pansexual Cult Leader,” and his manager Brooke Kelty, who walk out to “I Touch Myself” by the Divinyls; Candy Lee, who draws inspiration from the usually maligned “Divas” era of WWE’s Women’s Divison; and the “dykeconic” Saz Boatright, whose whole thing is that she’ll kick your ass and then go fuck your mom.

Though queerness is often a way to generate “heat” and these characters are presented as heels, they sometimes do genuinely get over with the crowd, in the same way that marginalized audiences have often found themselves rooting for the villain when watching a film.

There are even companies specifically catering to a queer audience, like Pittsburgh’s Enjoy Wrestling, New Jersey’s Paris is Bumping (which brings together wrestling, ballroom, and drag, if you needed any more evidence that wrestling is camp), and Butch vs. Gore.

Juan: So that’s something I definitely wanted to talk about before closing: both the catering (and sometimes pandering) to the queer community and the community itself that has developed around it. It feels like so many of my trans friends are obsessed with wrestling and I’m fascinated by what the community around it looks like in the face of discrimination (which, as we all know, isn’t necessarily enough to stop any queer person from loving something with problematic elements.)

Nadine: Though there’s still a lot of bigotry to go around, I think that the wrestling community can be much more welcoming to queerness, both on the part of performers and fans, than other forms of athletic competition because it’s a medium that thrives on the unique, the unexpected, and the “alternative.” Dustin Rhodes, the artist most famously known as the provocative and homophobia-baiting Goldust, has a trans child that he’s been vocally supportive of, and I have to think that seeing your dad go out on national TV in bondage gear every week probably made it a little bit easier to express yourself whoever makes you feel most comfortable. Because there are many wrestling fans who do fit the stereotype of the, dare I say it, aggressive neckbeard type, queer and trans fans have to stick together and I think can sometimes be even louder in part because they want to combat reactionary tendencies within the community. There’s a double marginalization to being a trans wrestling fan that just brings us all closer together: the society that we live in hates both the art we devote ourselves to and the idea of our very existence as queer people.♦