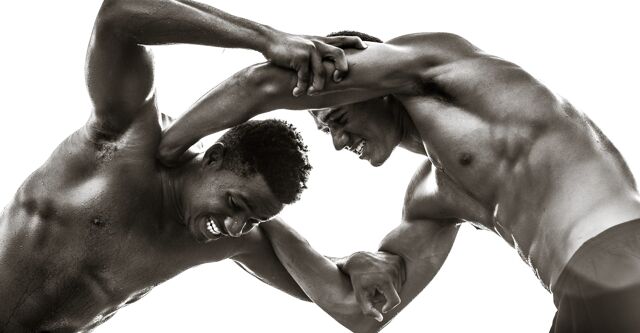 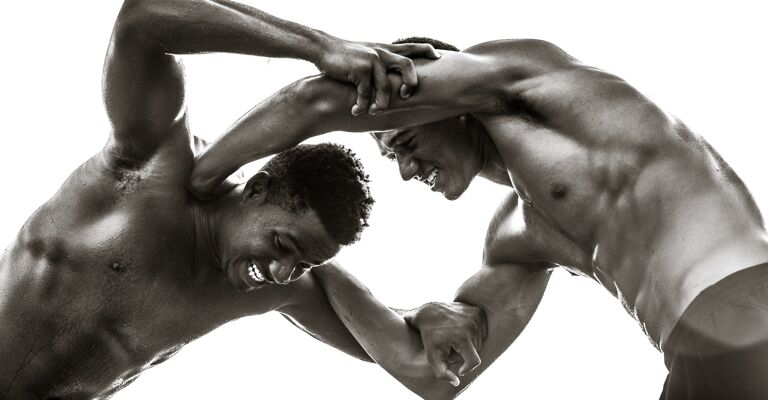 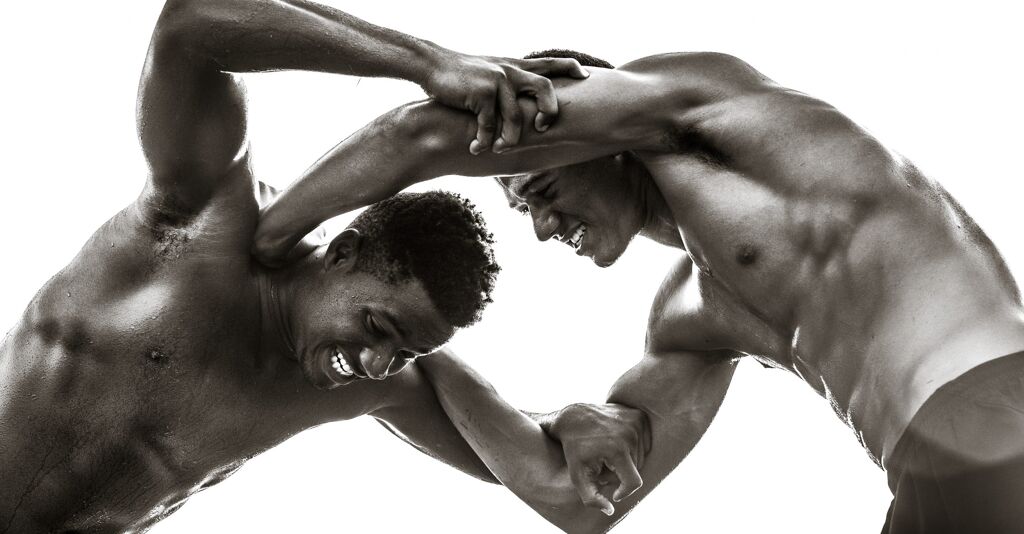 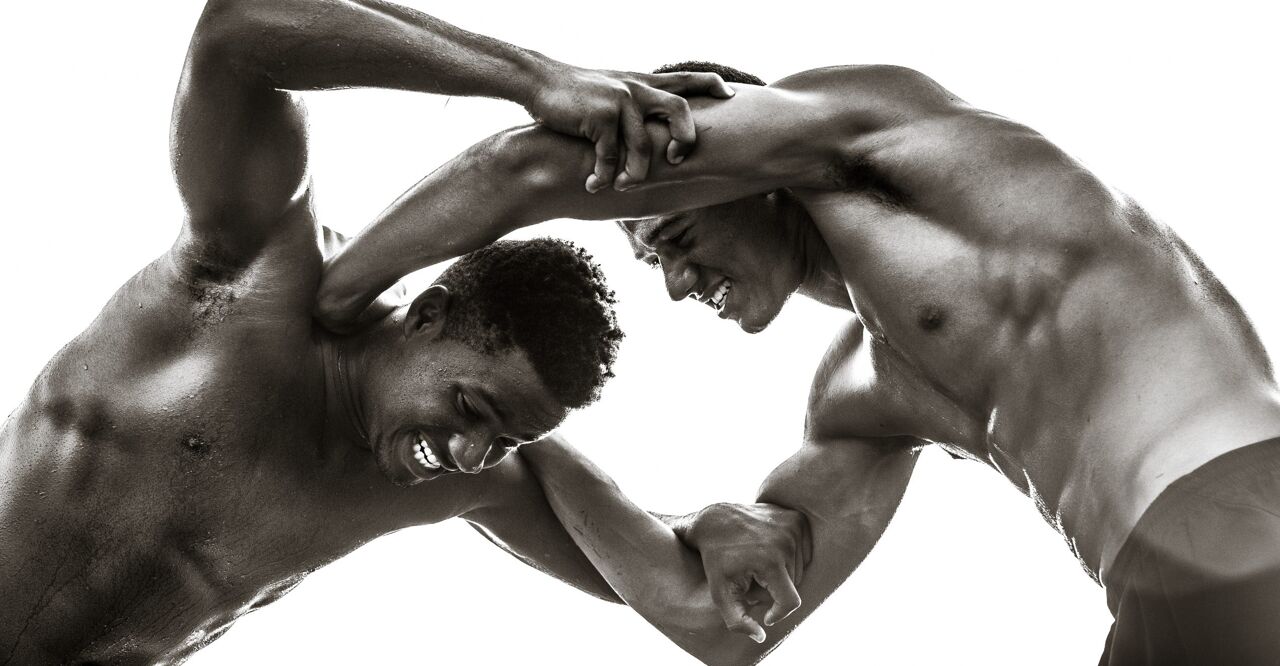 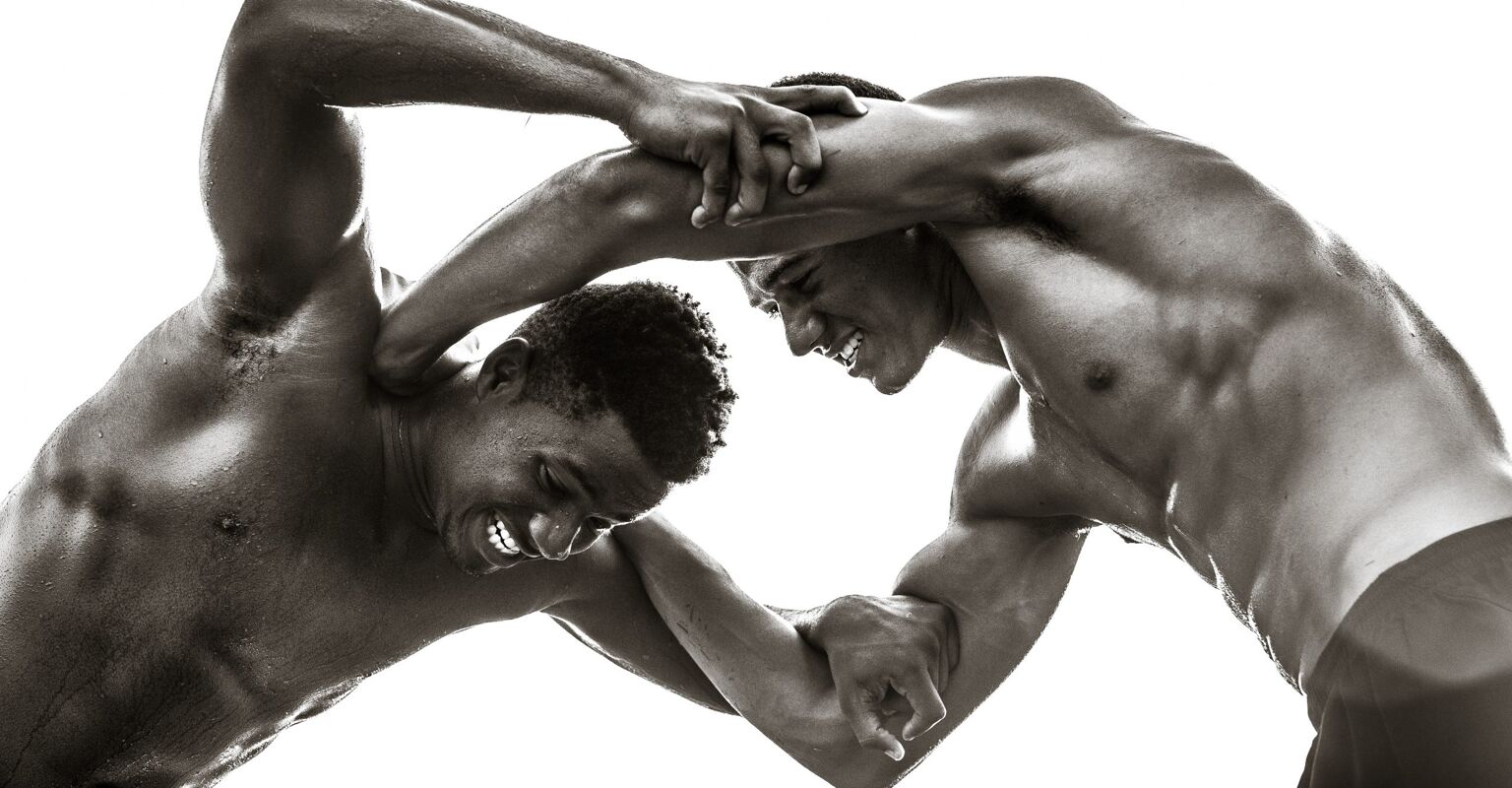 “We will break the bed tomorrow,” I texted.

He didn’t know I had a fetish for wrestling, but responded well to my overtures: I pinned him and he pushed me off his belly with pelvic thrushes, both of us tumbling down the bed.

The veterans bringing themselves to the arena at an age when men start worrying about their weakening bones is awe-inspiring. Whether it’s the short and stout Kasradze Z bringing down men much taller than him or the hefty Markov M using his enormous weight to his advantage, the duels are an exciting show of strength and technique. They’re more real and relaxing than the spectacles of hate and gore WWE and the ilk put up. Of course, the bouts always end with the two opponents shaking hands or parting with a slight pat on the back, but my voyeuristic brain is always good with conjuring juicier stories.

Internet is full of references around homoeroticism embedded in wrestling. The oldest contact sport between same-sex players imitates many sexual positions, be it the ‘par terre’ that resembles mounting or scissors, created by entwining one’s legs around the opponent’s body to twist him around.

“All these positions seem strangely familiar to me,” said a Reddit user about Greco Roman wrestling bouts in Olympics. “The only thing that differentiates this from gay sex is that there is a judge present. Imagine the duels were fought naked in traditional Olympics.” Turkish oil wrestling invites much more scrutiny because of its hand-inside-leather pants move and butt dragging which can be overtly homosexual to a Western gaze. Amateur wrestlers vehemently decry such connections, while famous queer professional wrestler Effy is going full hog to claim wrestling for gays with his merchandise.

“The only thing that differentiates this from gay sex is that there is a judge present.”

“Male Reader keen on weight-lifting, posing, sunbathing, seeks companion for camping holiday in South France, August,” yet another one explains.

Around the same time queer artist Francis Bacon painted “Two Figures”, depicting two beefy men grappling in bed, the suggestion of an erection almost at the center of the painting almost resolves any possible ambiguity. Bacon’s paintings are often identified as symbols, perhaps symptoms, of a time prior to the 1970s when homosexuality had not yet become a social, political, or public form. In an interview, Bacon said that inspiration for the painting came from a series of sequential photographs that Eadweard Muybridge took of two nude men wrestling. In the photographs, however, they were still just wrestling — gripping, lifting and pinning the opponent — and not getting involved passionately. In the painting, however, the bout moves to the bed, physical exertion becomes sex, rivalry made passionate, and supposedly neutral spectatorship comes much closer to voyeurism.

We may have different reasons for this fetish: A bisexual friend, who identifies as femme, told me that for her, it’s about being in control and it varies. “I am a switch, so it depends on the person. With women, I like trying hard to get and tease, making them crave for me. I don’t like dull foreplay,” she said. “With men, it’s different. I have daddy issues because my father is a typical patriarch and I don’t have a strong connection with him. I don’t like men pinning me down and prefer to dominate and get my way with them.”

Another date with whom I had a duel called it a dynamic dance that includes passionate teasing and mock fighting to dominate and submit until the spent bodies meld in pleasure. It holds true for me, too, but there seems to be another underlying reason. Wrestling in bed might be my response to not liking violence in real life: I hate to see people fight each other and have never been involved in a physical duel, avoiding minor provocations. In fact, I have had good friends trying to protect me from possible bullies in the play field without my asking. “Beware if you say anything to him,” they used to announce, leaving me wondering just which part of my personality conveys that I can’t stand up for myself.

Sexual wrestling might be my way to feel compensated, a pushback against societal emasculation. Wrestling depicts the primal desire for control, drawing on the symbolism of masculinity like struggle, strength, determination and courage. I prefer to wrestle with stout or hefty and hairy types, a typical image of masculinity, and it’s empowering to pin them down in bed. As much as I fantasize getting squeezed in a bear hug or grimacing in a head lock, I don’t really like getting dominated. It’s not always possible to find a match, however. Not everyone wants to put up a fight and submit too easily. I have to guide others who may not have explored this genre of foreplay but are willing to experiment. It’s a jackpot when I find the ones sharing the interest.♦

Lightbug is a story collector who daydreams about a homo-normative world. He is on twitter at @gaylores